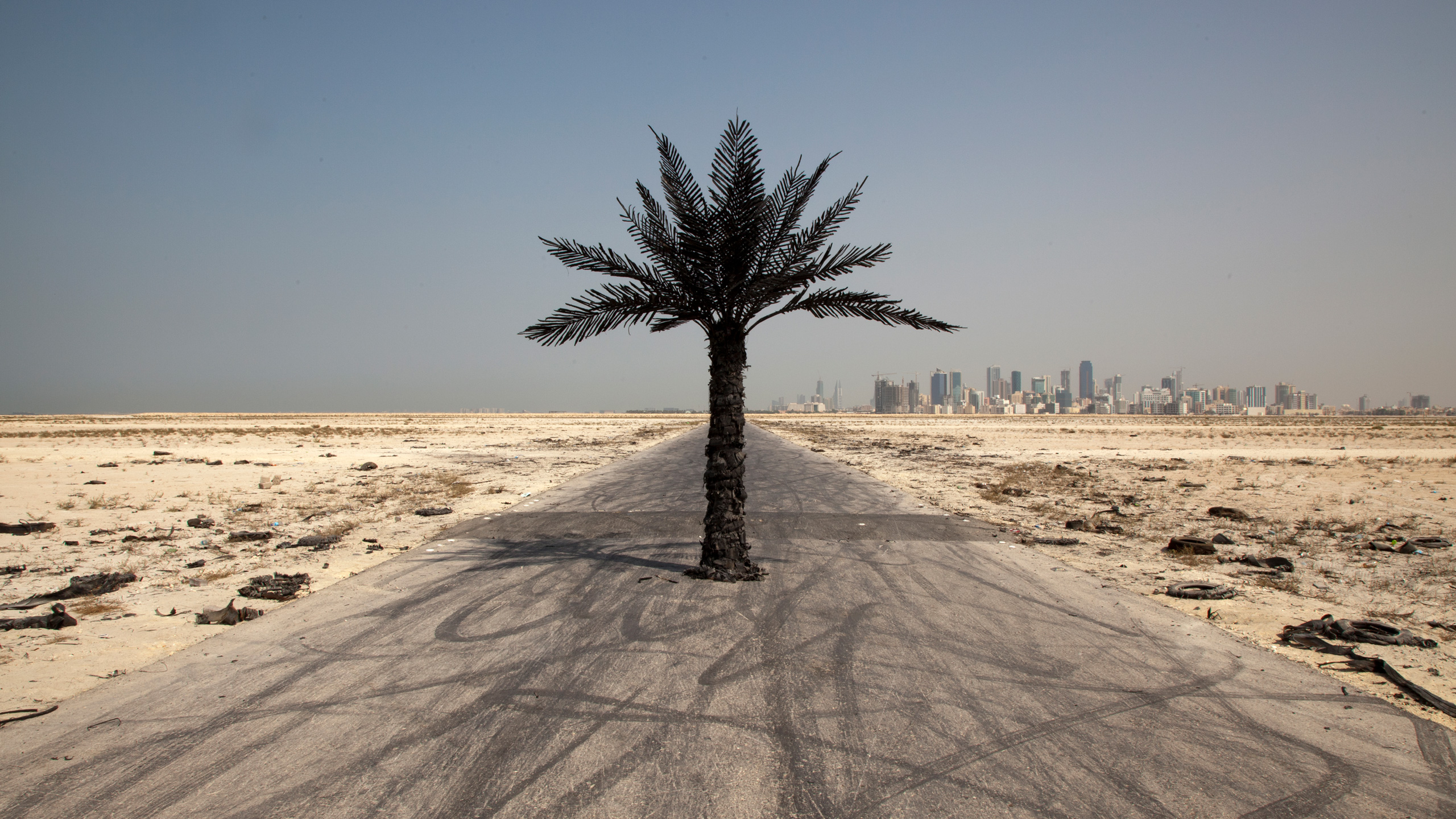 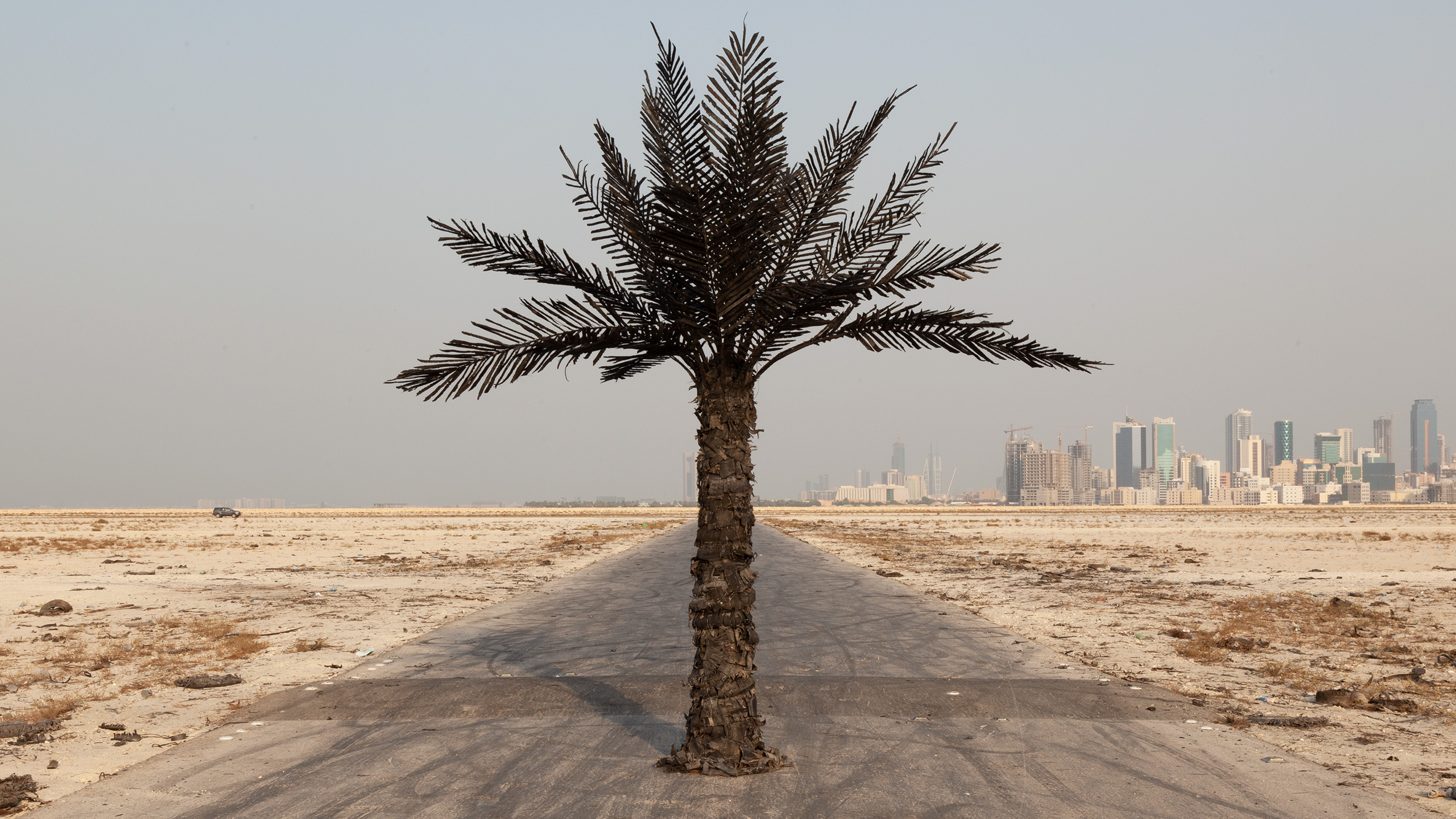 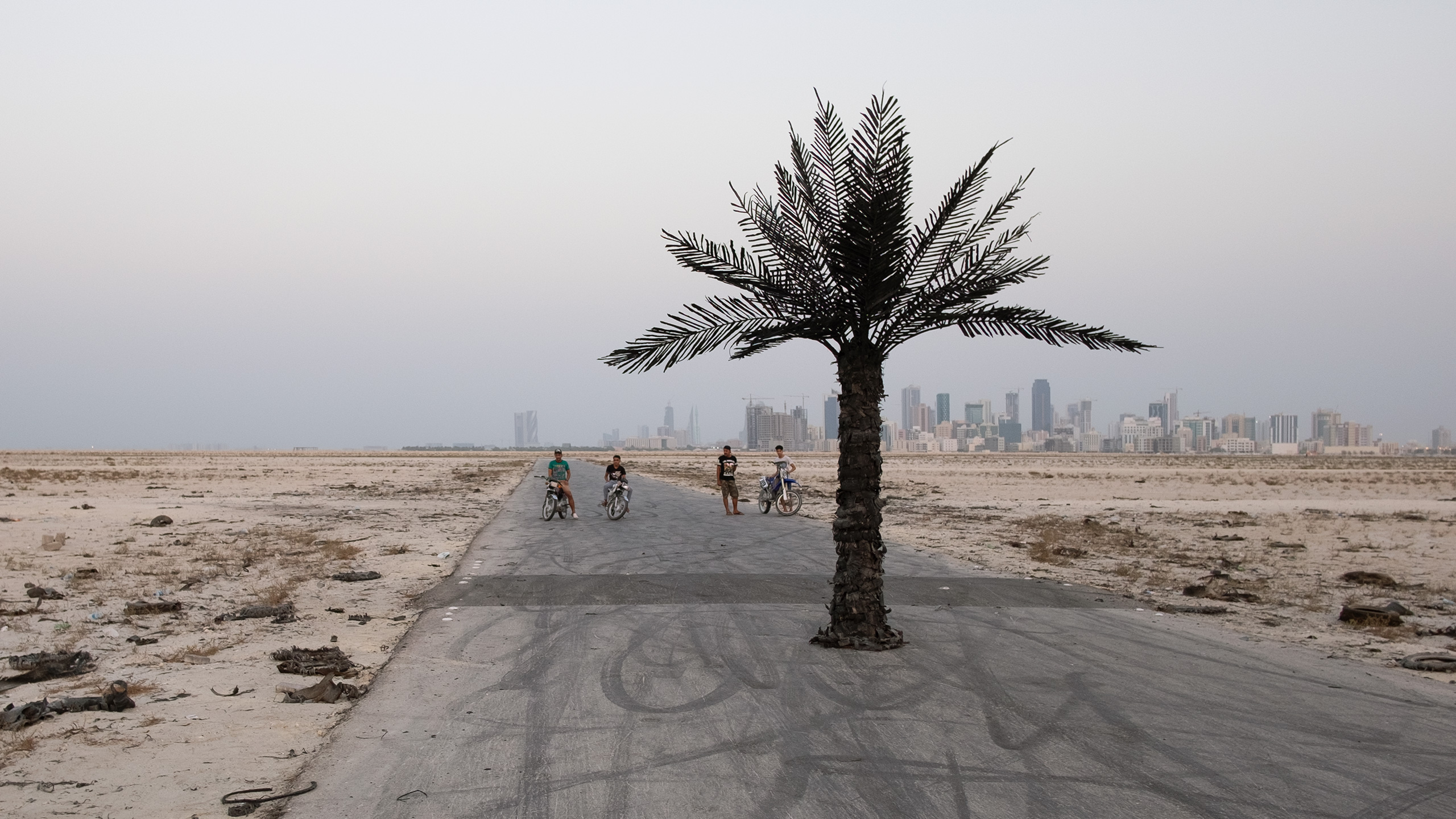 The Island of a Million Palm Trees

Project Stages: Video The Island of a Million Palm Trees

Bahrain was once a tropical paradise, known as the island of a million palm trees. But the iconic date palm groves have almost completely disappeared due to the rapid urbanization and the development of artificial islands. The project took place on the Nurana island, a man-made island on the northern coast of Bahrain. After the completion of the island all further construction projects were halted, leaving the island empty. This vast open space is now temporary reclaimed by people from the neighboring communities and used as a race track. As a result, the sides of the only asphalted road in the middle of the island are covered in huge amounts of rubber debris. The black palm tree is made from this material and installed in the middle of the island as a monument in commemoration of the many palm trees that have disappeared from Bahrain.

There used to be many natural springs in Bahrain but due to the rapid urbanization and the development of artificial islands it not only lost all of its fresh water sources but also most of its iconic date palm groves. In a few decades the face of the island has changed dramatically. After the discovery of oil in 1932 it has developed its resources at the expense of its agricultural lands. As a result, lands that might otherwise be productive and green are gradually claimed by the expansion of the desert. Furthermore the reclamation projects have extensively damaged coastlines, coral reefs and sea vegetation. The newly reclaimed land has destroyed the original coastline thereby affecting the livelihoods of the local fishermen.

These environmental problems stand in stark contrast to the references of paradise, found in most tourist guide books or in real estate advertisements which refer to the Sumerian and Mesopotamian mythos, declaring Bahrain as the land of eternal youth and paradise. The ancient past is used to restore Bahrain to its original beauty, as a sacred island, a place closely resembling the Garden of Eden, where death and sickness did not exist and sweet waters flowed abundantly. Today, a lot of effort is made to reemphasize this lost paradise, especially in the context of the tourist industry. But it is hard to imagine how this ‘holy and pure land’ resembles the current situation, considering the degrading natural surrounding and the turbulent political situation. The work aimed to show the contrast between Bahrain’s attempt in keeping up appearances and its darker underlying reality.

The project took place on the Nurana Islands, which can be accessed from the al Nakheel highway, locally known as the ‘palm tree highway’. (although most of the palm trees have long gone) The two man-made islands on the northern coast of Bahrain were constructed in 2010 and were imagined to become part of a new city with luxury apartments, villas, hotels, commercial spaces parks and waterfront promenades. But already in 2009 the northern municipal council members refused to grant a license to Al Manara Development Company to carry out the 1 billion dollar project. The council appealed against the continuation of the project, as there was no permit for land reclamation, which was a violation of the general structure plan of the country. Nevertheless, the reclamation continued, although all further construction projects were halted, leaving the islands bare and empty. This vast open space is now temporary reclaimed by people from the neighboring communities (mostly poorer ‘Shia’ villagers, who wouldn’t otherwise benefit from the new developments) and used as a temporary ‘park’ for walking, horse riding, swimming and car racing or ‘drifting’. As a result of the racing, the sides of the only asphalted road in the middle of the island are covered in huge amounts of rubber debris.

For the work I collected the rubber waste and use it to construct the first palm tree of the Nurana island. The sculpture was meant as a monument in commemoration of the many palm trees that have disappeared from Bahrain due to the urbanization and reclamation projects. The work tried to zoom in on the environmental crisis of Bahrain and reflect the depressing political reality of today. Documentation of the work was shown during the Nest festival in Bahrain in 2017.