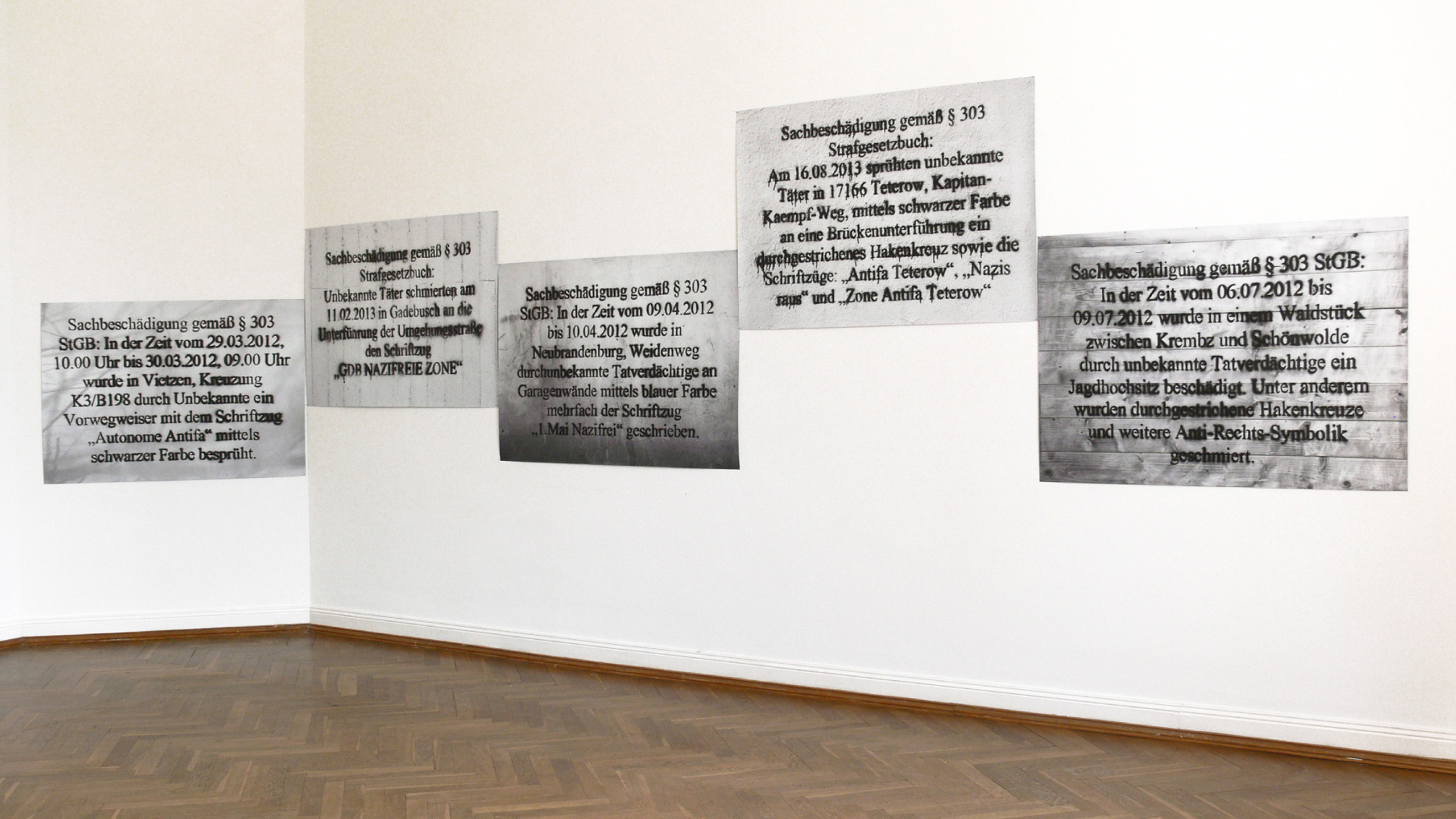 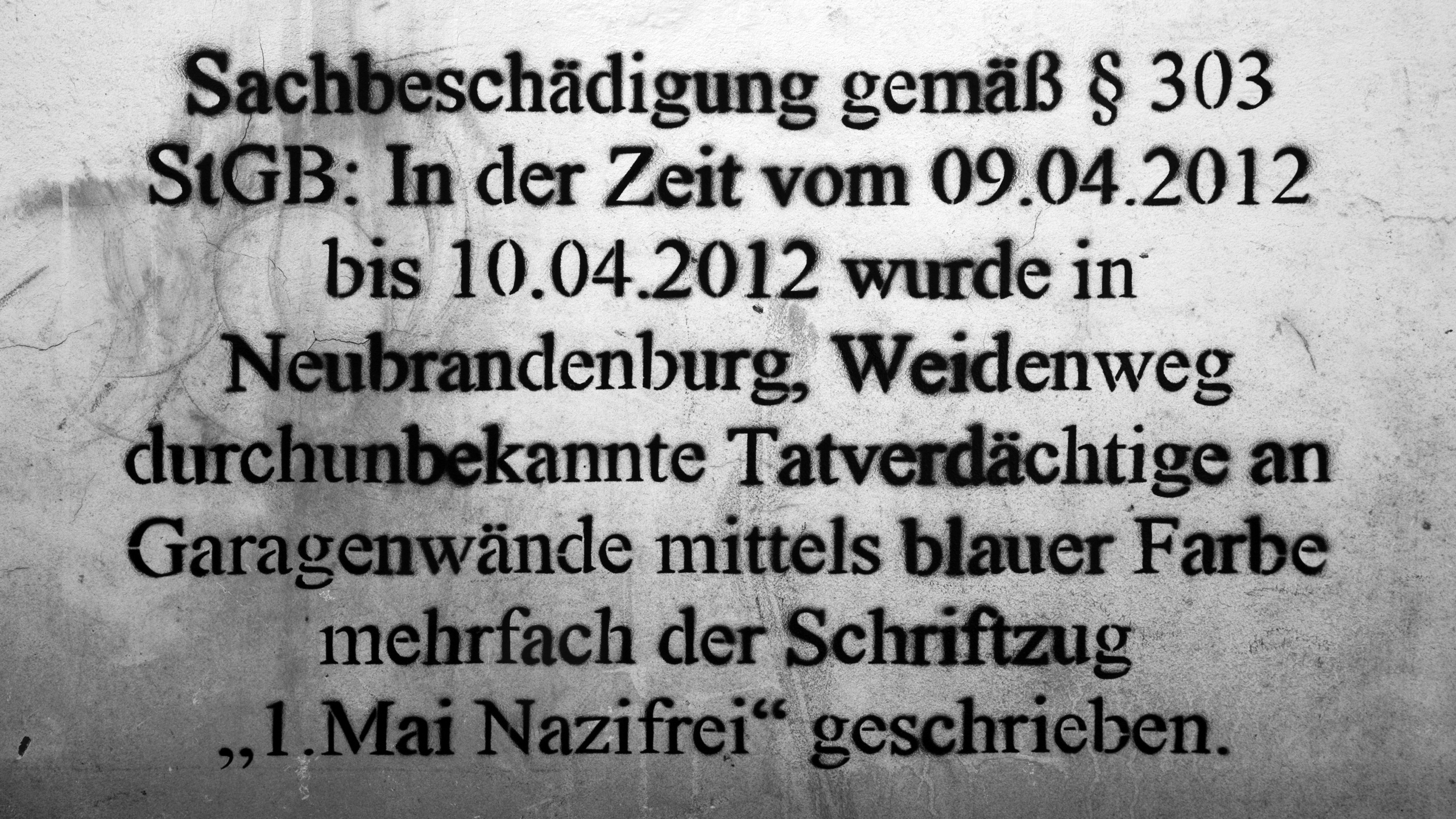 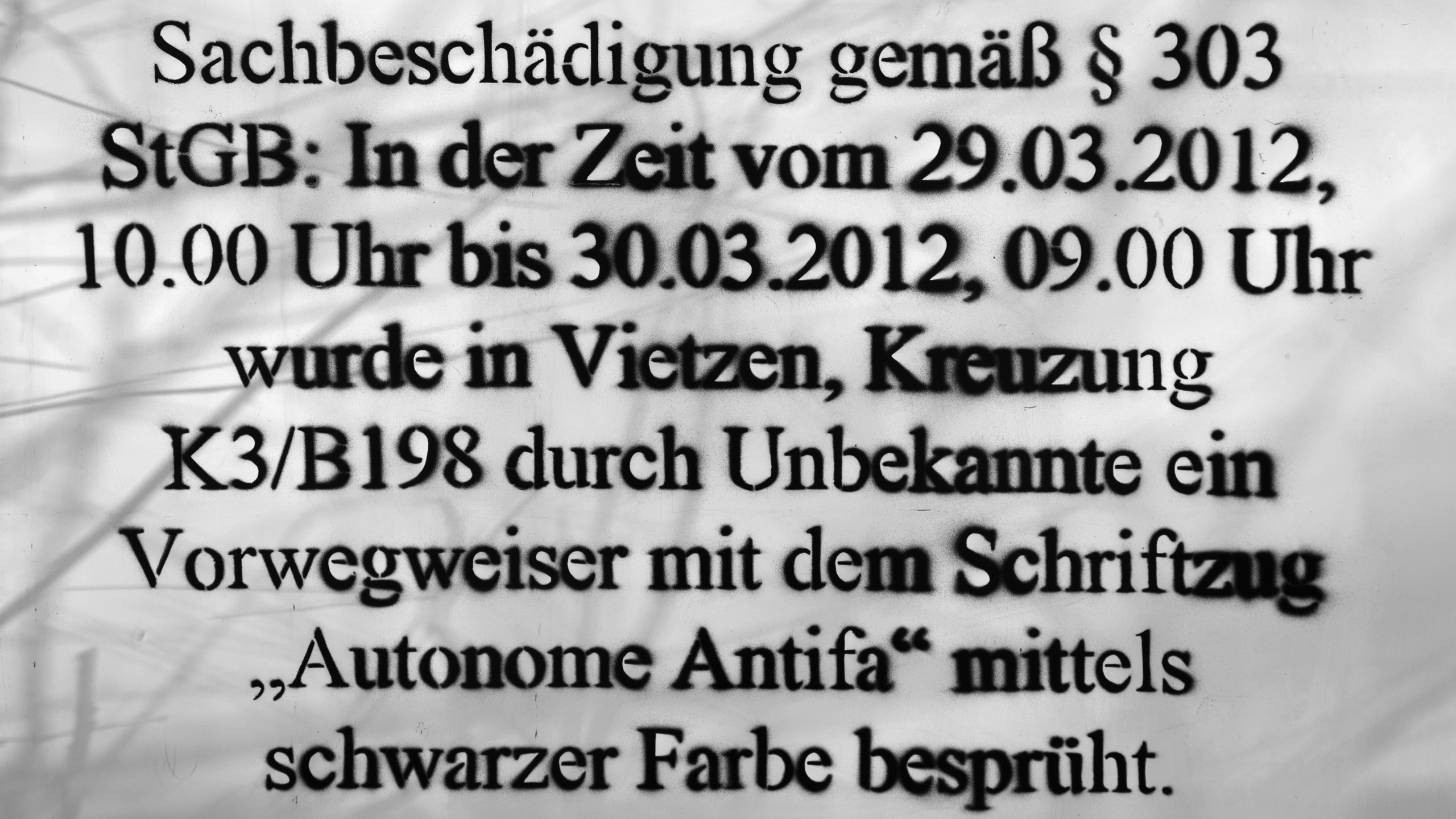 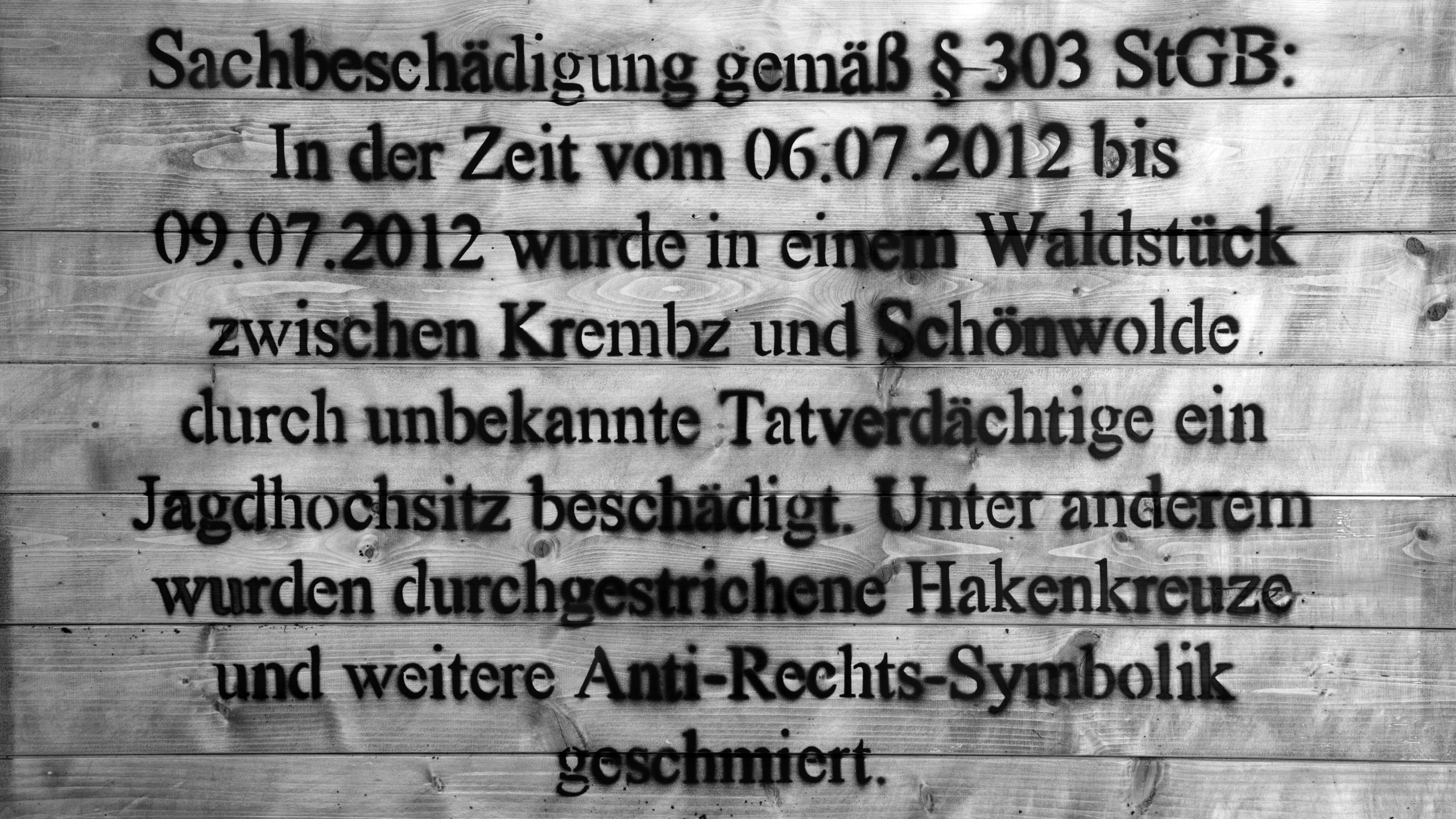 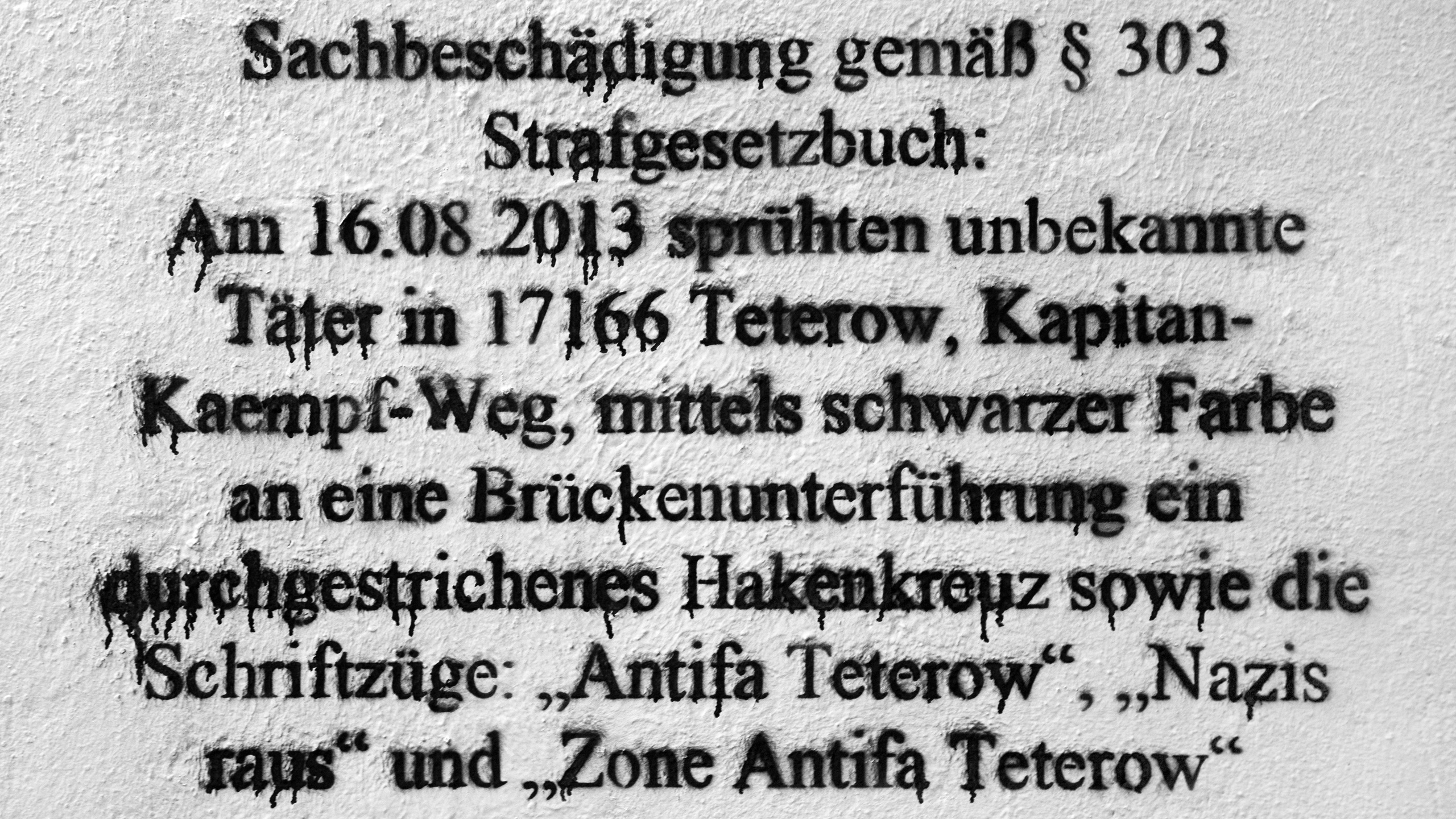 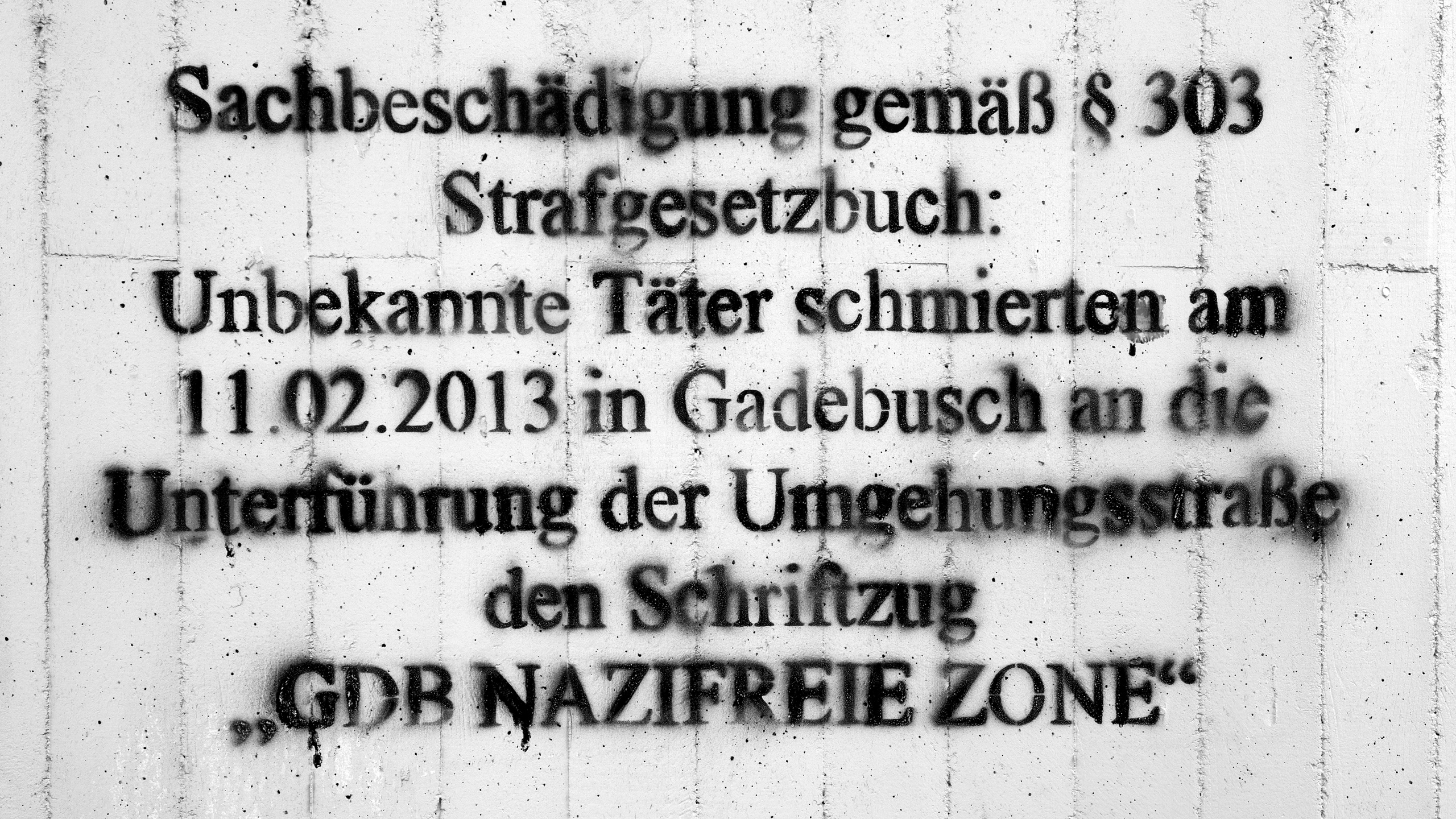 (German for ‘Property Damage’) deals with the debate on the legality of the German far-right political party (National Democratic Party). At the end of 2013, an application was submitted to the constitutional court, arguing that the party should be declared illegal. In its defense, the NPD collected information about politically motivated crime, which can be attributed to the far left. The ‘Sachbeschädigung’ project consists of graffiti from descriptions found on the website of the NPD. The interventions took place at the documented ‘crime-scenes’ across Mecklenburg-Vorpommern and were an attempt to bring the prohibition debate into the public domain.

The work is developed during a residency at Schloss Plüschow in Mecklenburg-Vorpommern. This is a region in Germany with a relatively strong presence of NPD sympathizers (far-right political party). In many of the small towns and villages neo-Nazi graffiti and counter-graffiti from anti-fascists groups can be found. These sprayings on the walls are a visual reminder of the ongoing discussion on the legality of the NPD.

The project ‘Property Damage’ is based on documents, found on the website of the parliament of Mecklenburg-Vorpommern. The documents are inquiries handed in by the NPD and completed with answers by parliament. The information gives an overview of left-wing crime in the region, collected by the police. Most of these offenses, such as graffiti, property damage, insults, threats and burglary are expressions of protest directed against the NPD. The queries are part of a research by the NPD to analyze and point out the problem of what they call: “left-wing extremism”. In an extensive inquiry of almost 300 pages they request information about everything that has to do with the far-left ideology.

The irony of this investigation into the culture of the extreme left is that the NPD copies the same mechanisms that are used against them. Their parliamentary inquiries are an attempt to distract public attention away from the fact that they themselves are about to be declared unconstitutional.

During the residency I visited many of these ‘crime scenes’ and developed a method in order to visualize this collection of so-called left-wing crime. I decided to work with graffiti directed against the NPD and made stencil sprayings out of the descriptions found in the inquiry list. The stencil graffiti (size A0) were sprayed on the same location of the original graffiti. The interventions took place all around Mecklenburg-Vorpommern at the end of 2013, and were an attempt to illustrate the absurdity of the NPD’s investigation into far-left crime.