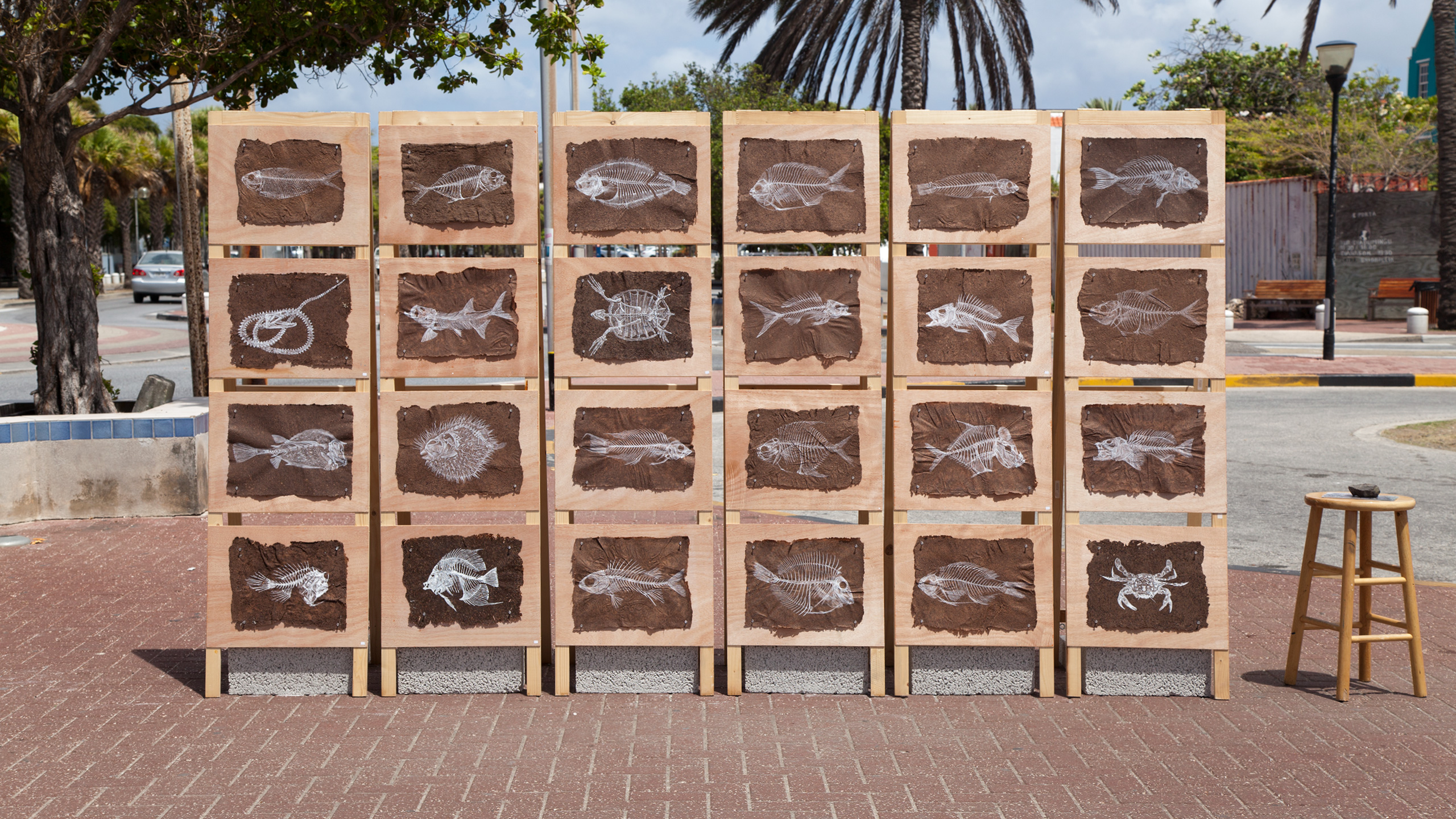 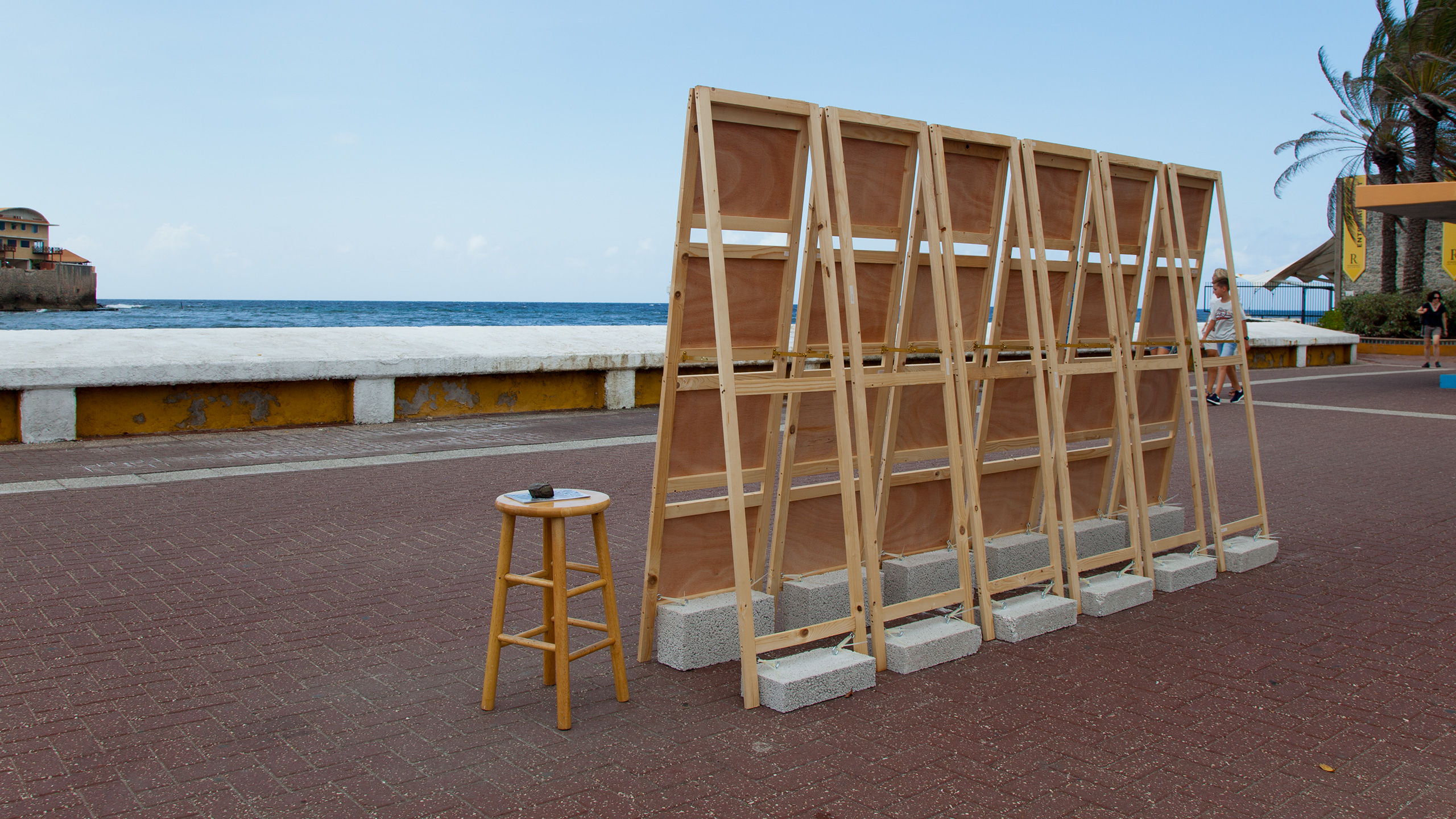 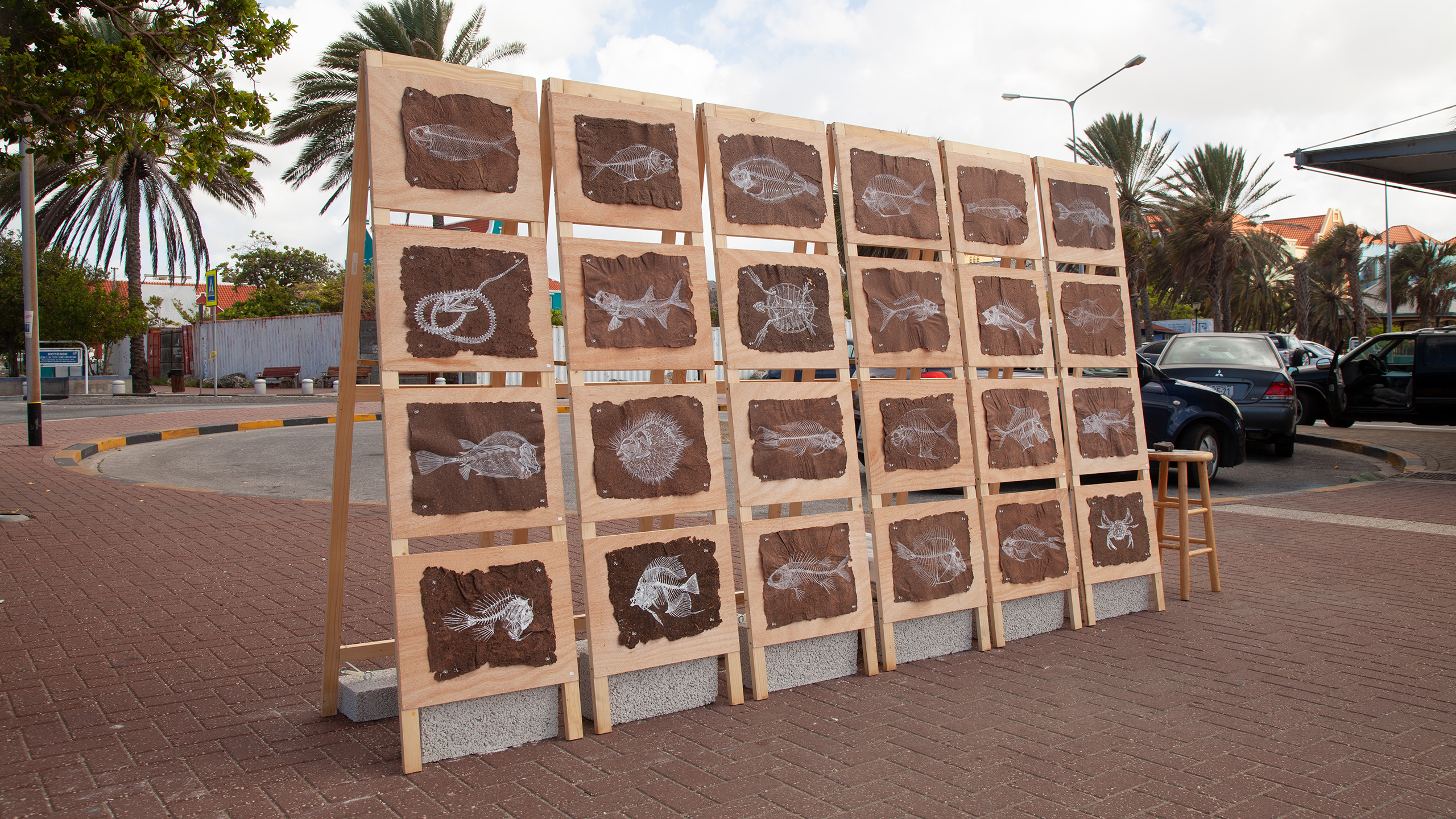 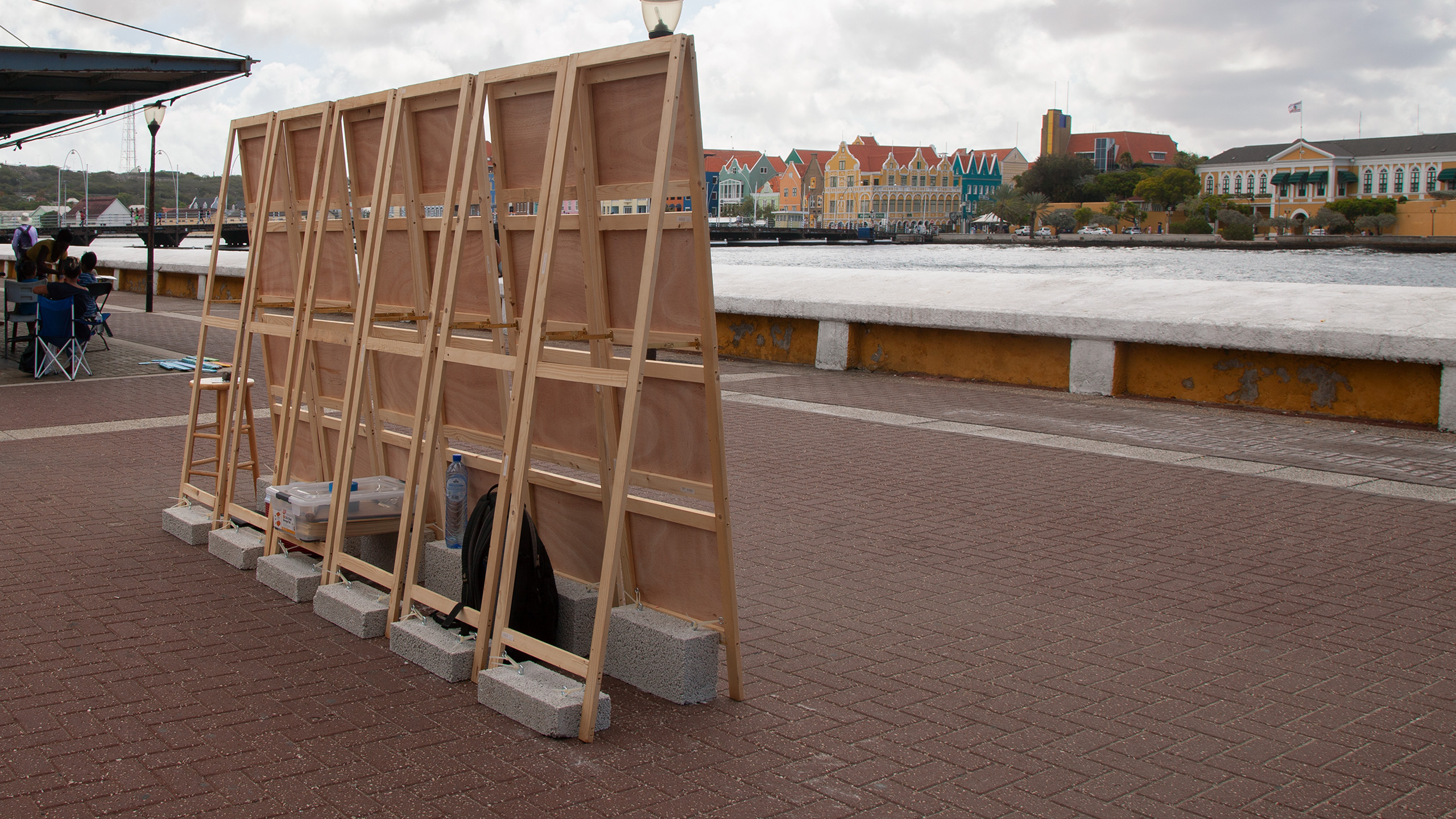 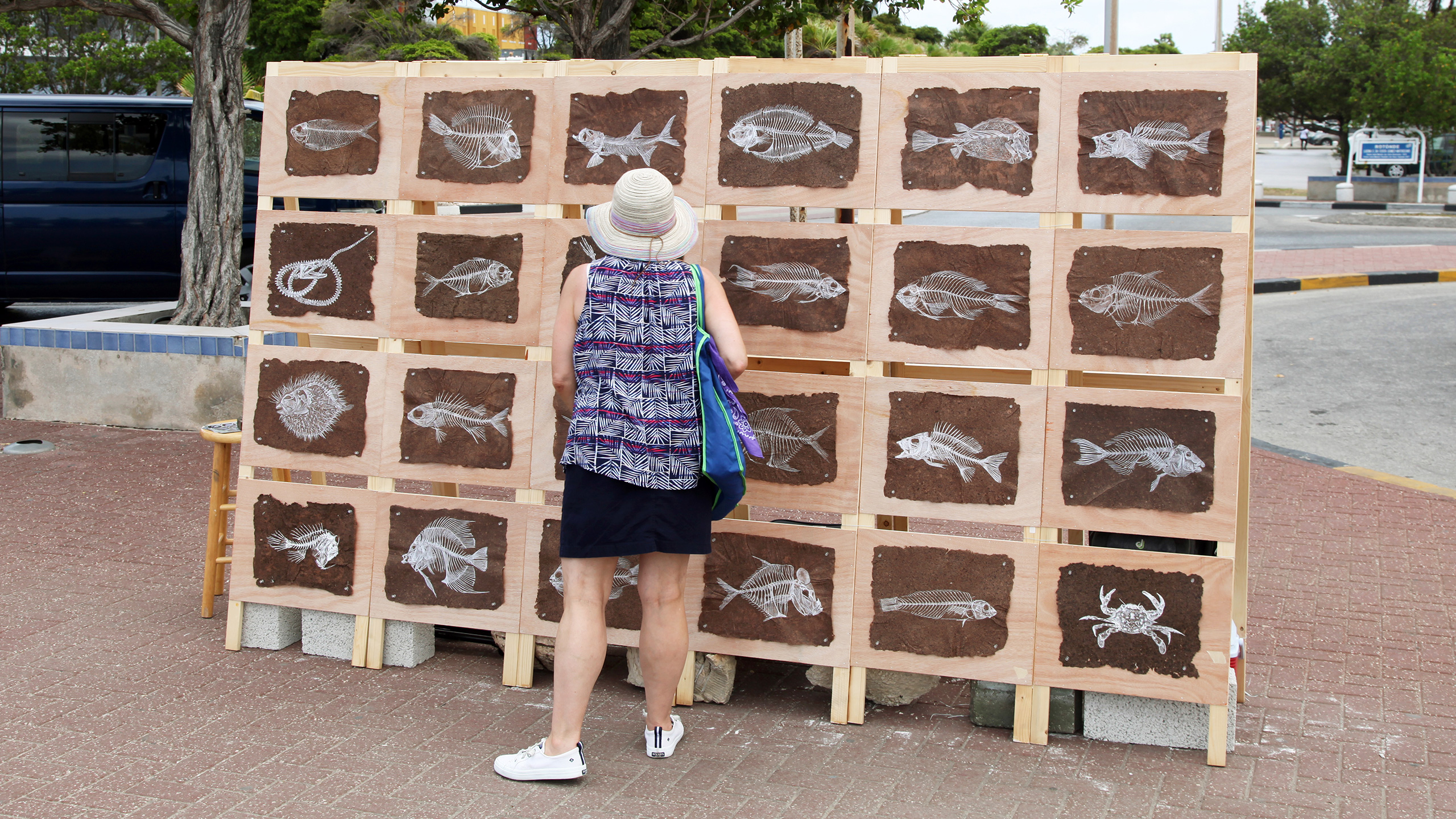 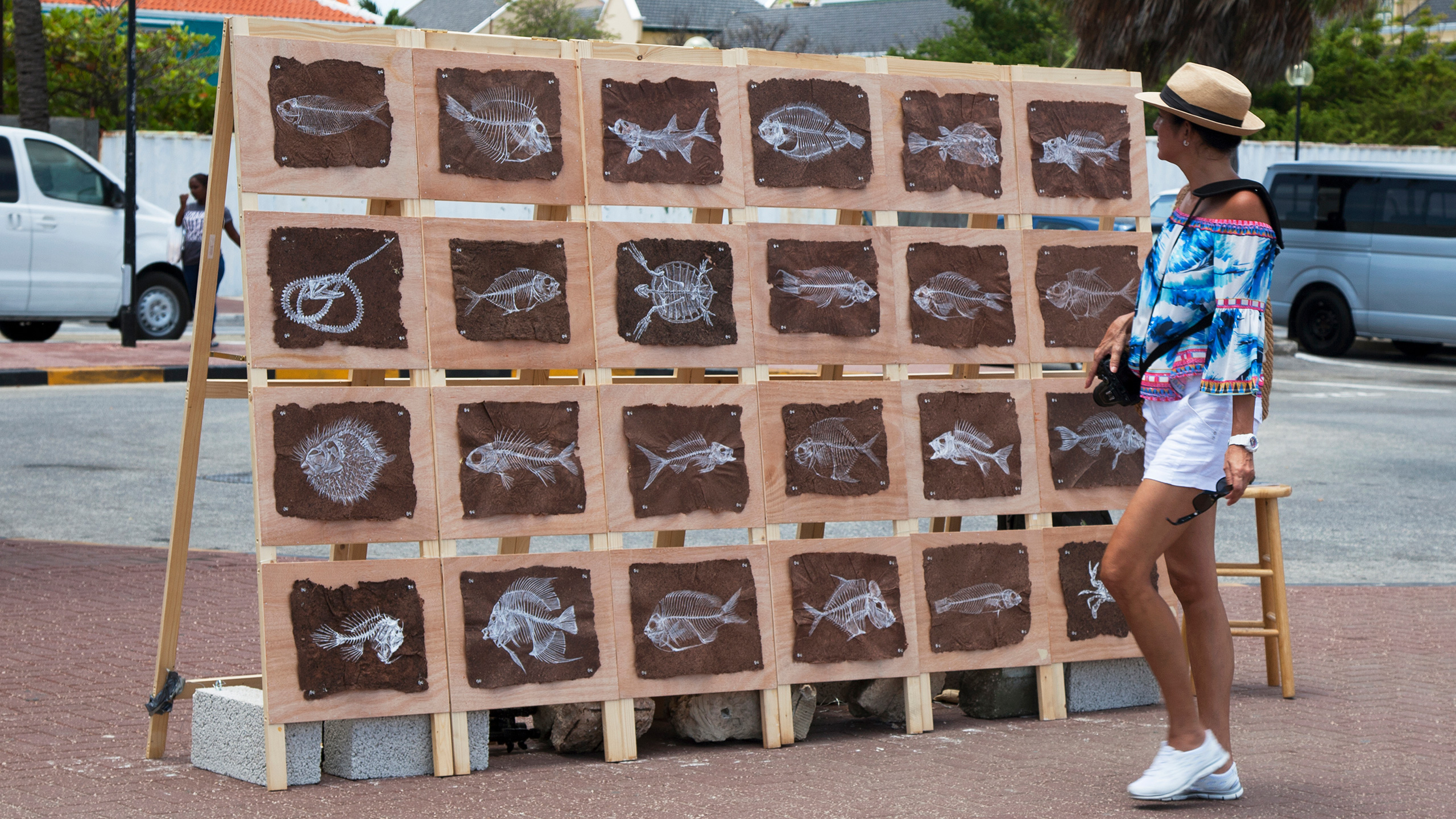 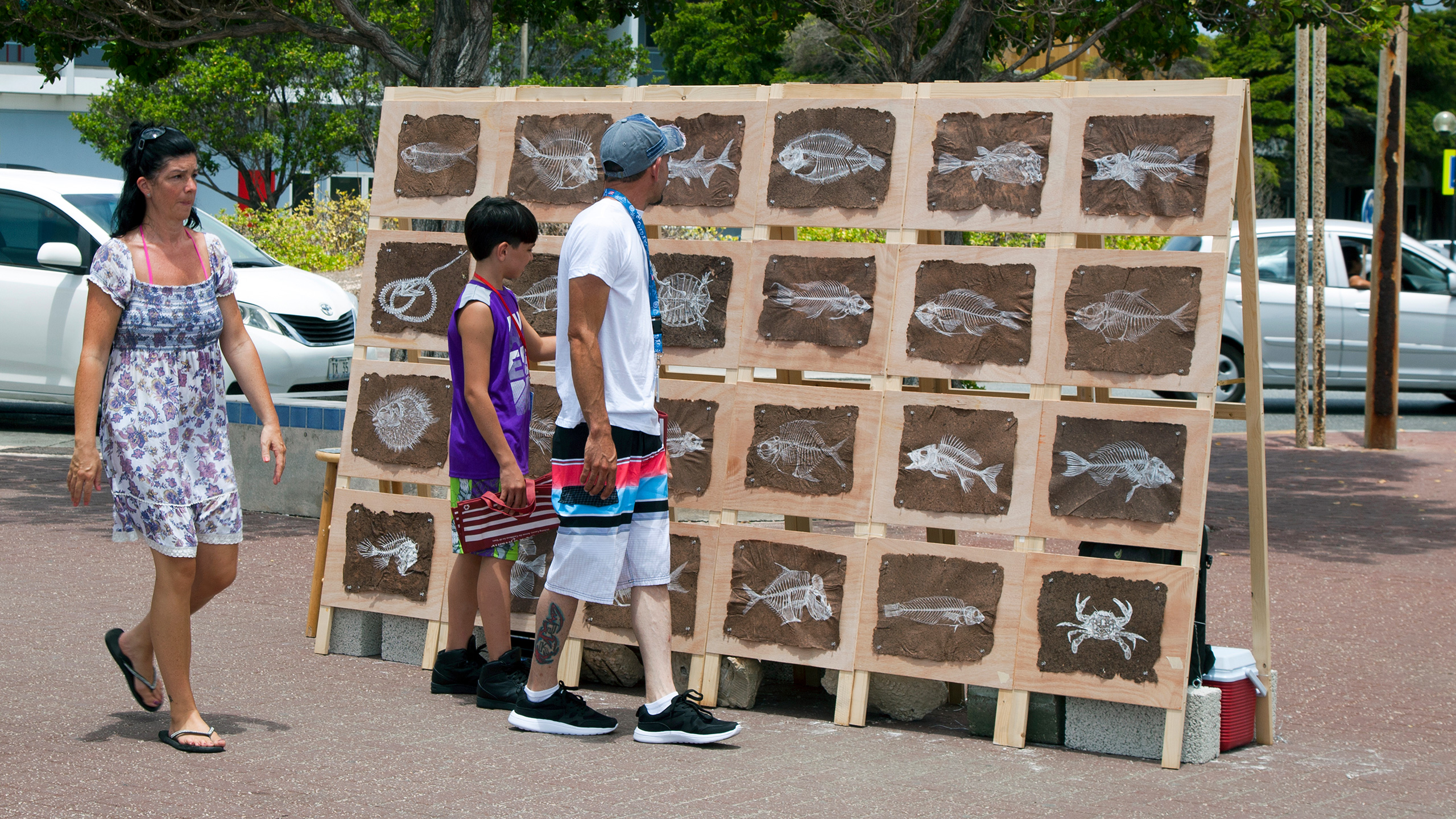 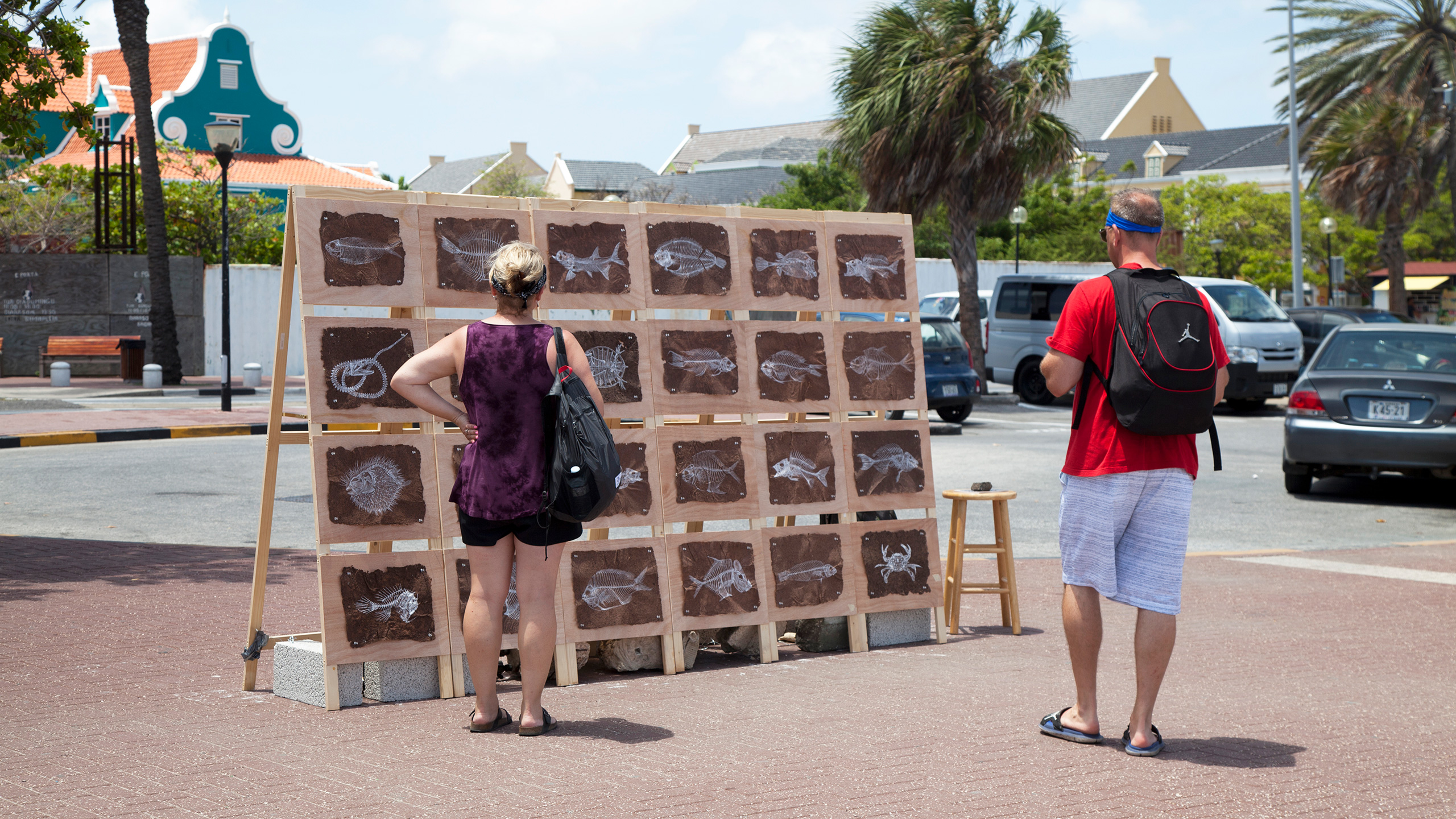 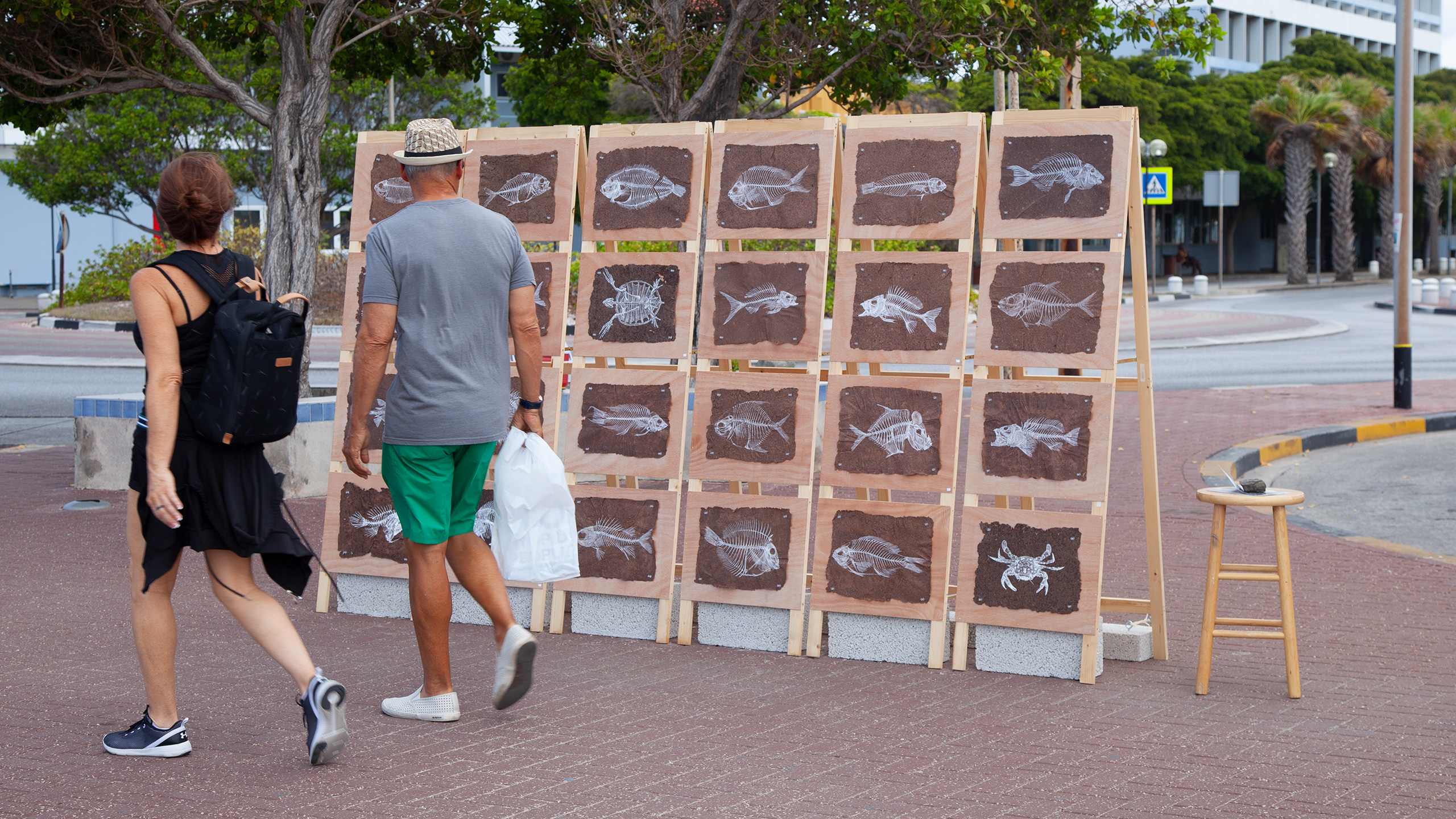 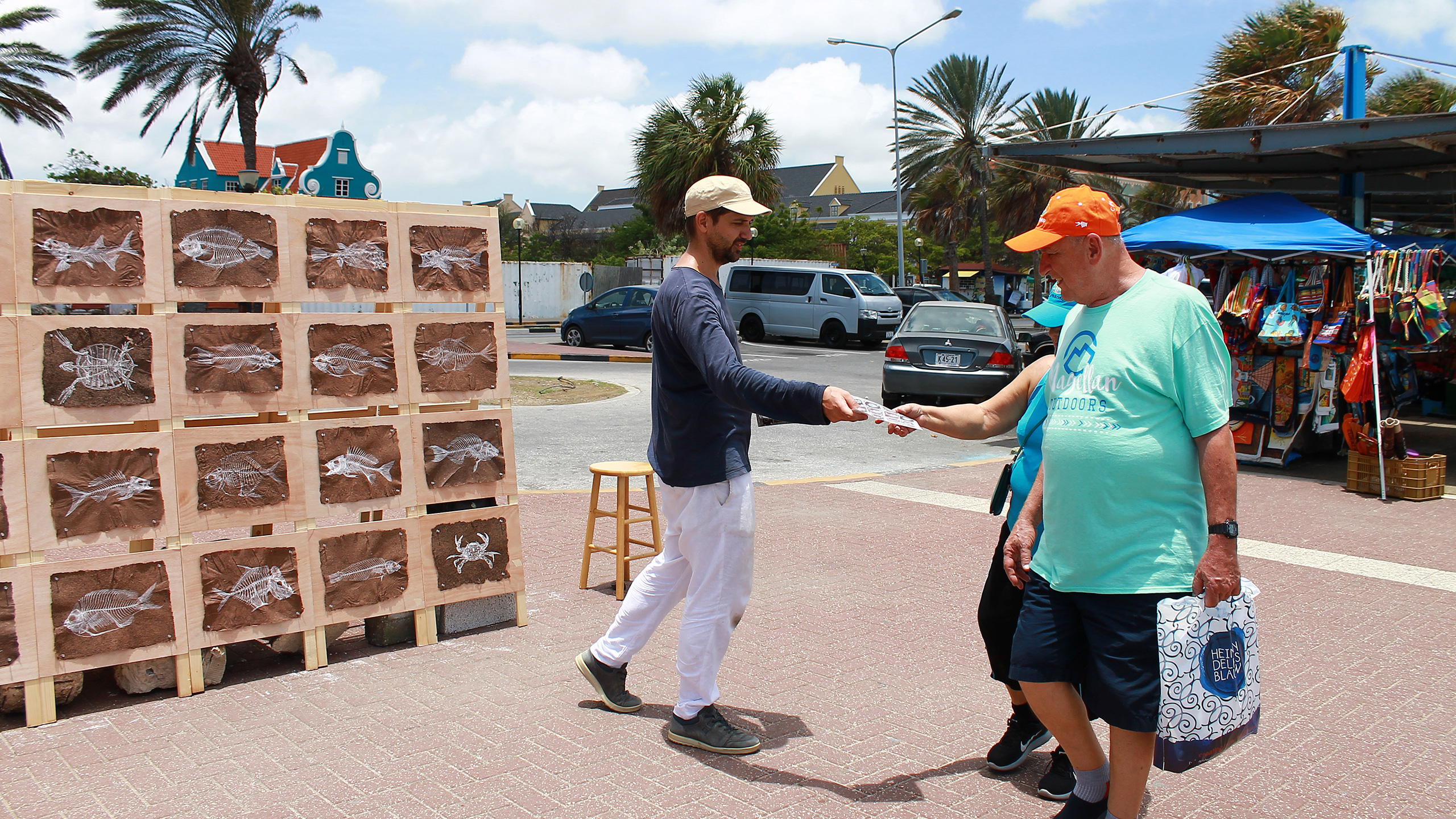 Golden Tide* was the final result of a work period at the ‘Instituto Buena Bista (IBB) on the island of Curaçao and dealt with the recent influx of the sargassum seaweed in the Caribbean sea, which kills local fauna and destroys natural habitats. The images of the skeletal remains were painted on paper made from sargassum. Scientists believe that the sudden growth of the algae is linked to the fertilizer run-off from the amazon river in addition to rising ocean temperatures due to climate change. The paintings were sold on the local tourist market and the proceeds were donated to Amazon Watch, an environmental organization in Brazil.

Since 2011, the Caribbean Sea and the Gulf of Mexico have seen a steady growth of the Sargassum seaweed. One of the main causes of this sudden growth is the large-scale cutting of trees and the expansion of industrial farming in the Amazon region. As a result, large amounts of fertilizer are being carried by the Amazon river towards the sea. These extra nutrients in combination with an increasingly warmer ocean form the ideal conditions for the further growth of sargassum.

When the large patches float on open sea they form a cradle of life but when a sargassum bloom washes upon the white Caribbean beaches, the golden seaweed turns into a deadly brown layer, removing oxygen from the water and releasing dangerous gases, such as hydrogen sulfide and ammonia; harmful to humans and animals. These so-called ‘dead zones’ make all life impossible. On Curaçao, these zones are mostly found on the north side of the island, leaving the tourist beaches on the south side unaffected. For the island it’s a blessing in disguise. Although the tourist industry is spared, it nonetheless poses a major risk for Curaçao. The disruption of the ecological balance in places like ‘Boka Ascencion’ has consequences for the entire fish population and the turtle population.

Because the problem in Curaçao is mostly out of sight, comparatively little attention is paid to it. Therefore the project tried to make the situation visible through a public intervention in the center of Willemstad. The action took place in the form of a souvenir booth where paintings were sold that were painted on paper made from sargassum and depict species that died as a consequence of the rotting seaweed. The animals were found during field research on Curaçao by myself and other environmental organizations. The paintings were sold for 100 guilders (ANG) each and the proceeds were donated to ‘Amazon Watch’, an organization that supports indigenous communities in their fight against the deforestation of the Amazon rainforest.

* massive inundation events are known as golden tides due to the golden brown colour of Sargassum. Furthermore, in Portugal, the seaweed used to be seasonally harvested and used as fertilizer on the land. The golden colour of the seaweed was seen as a sign of prosperity as it increased crop growth.