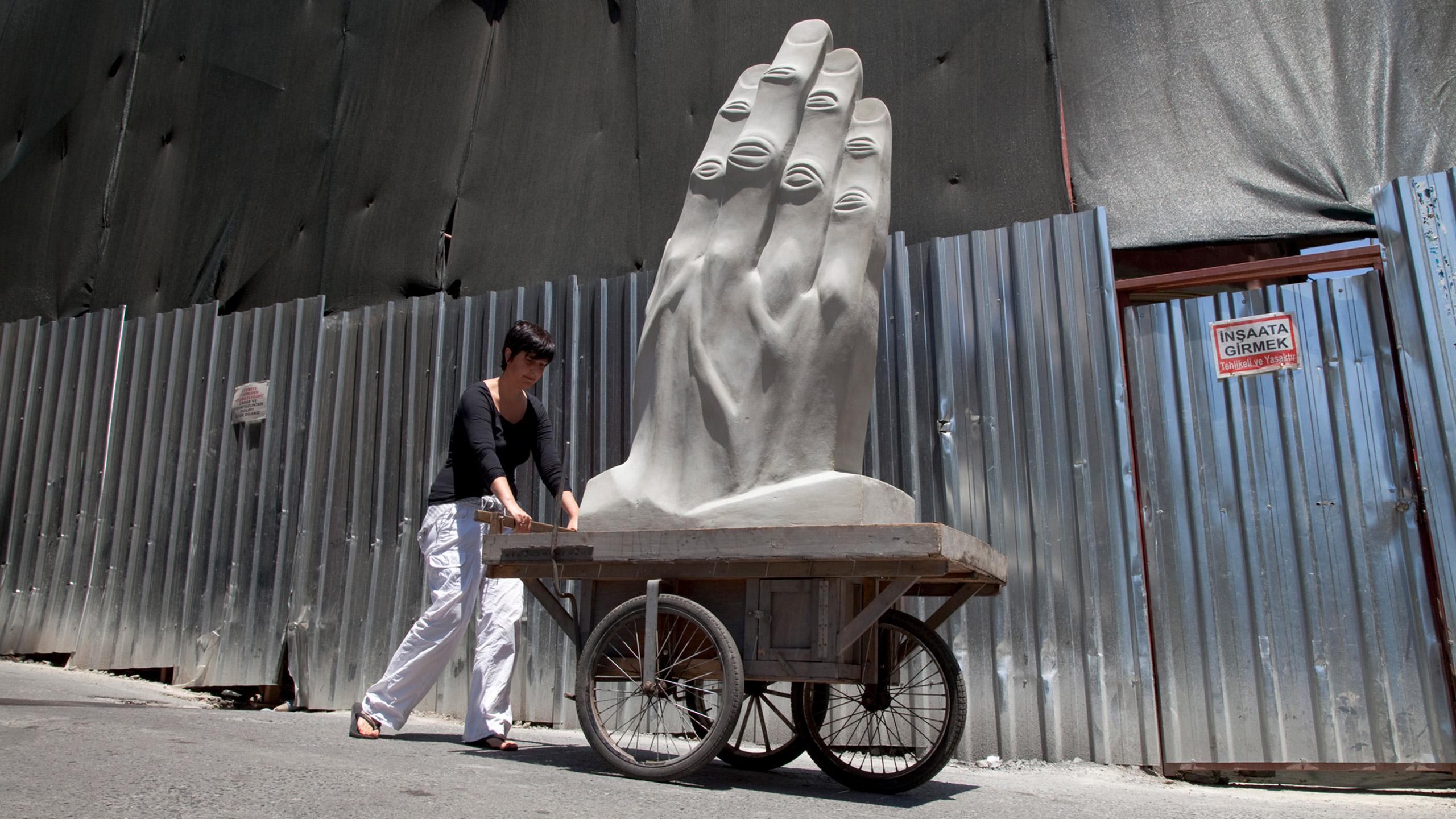 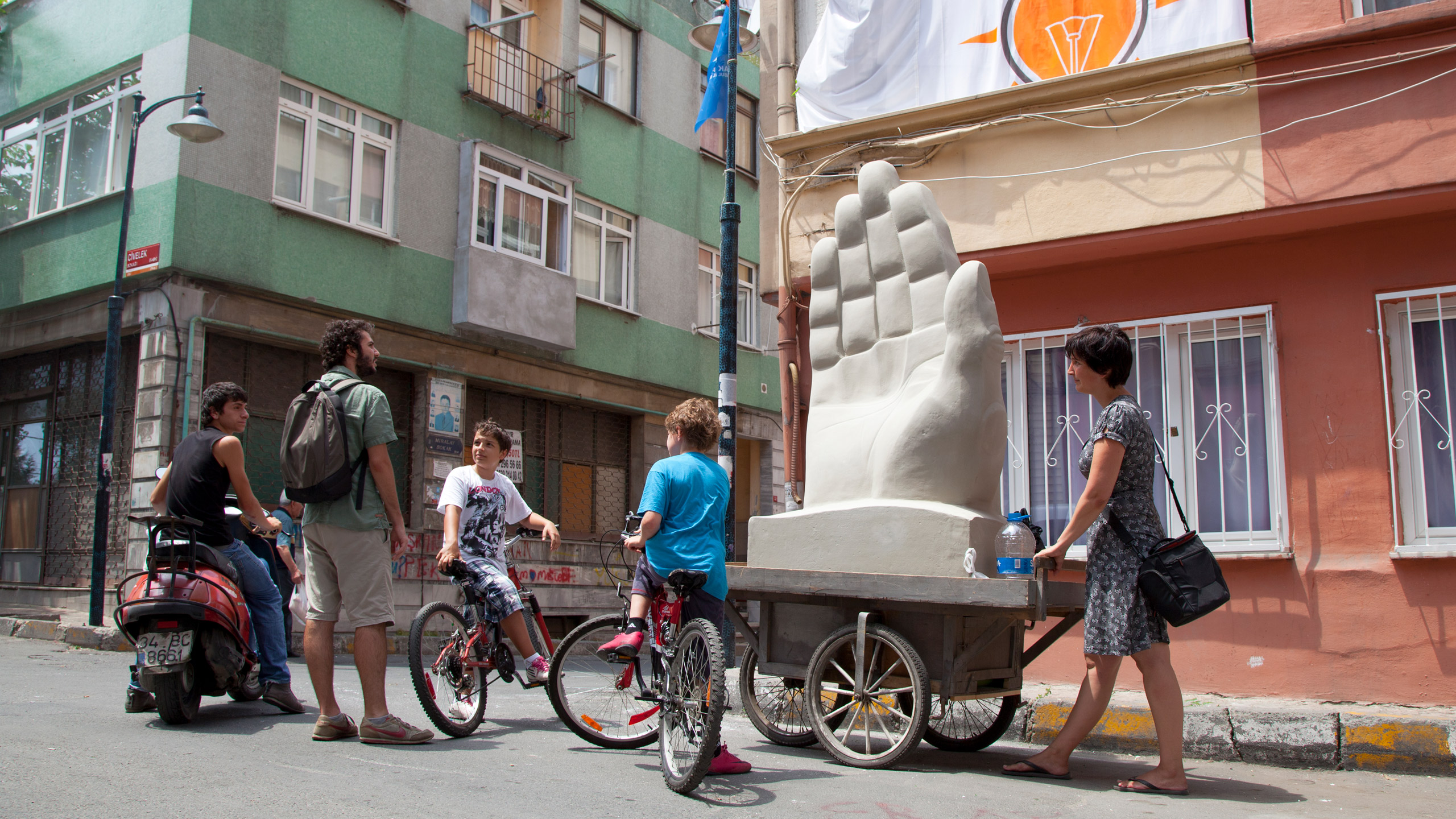 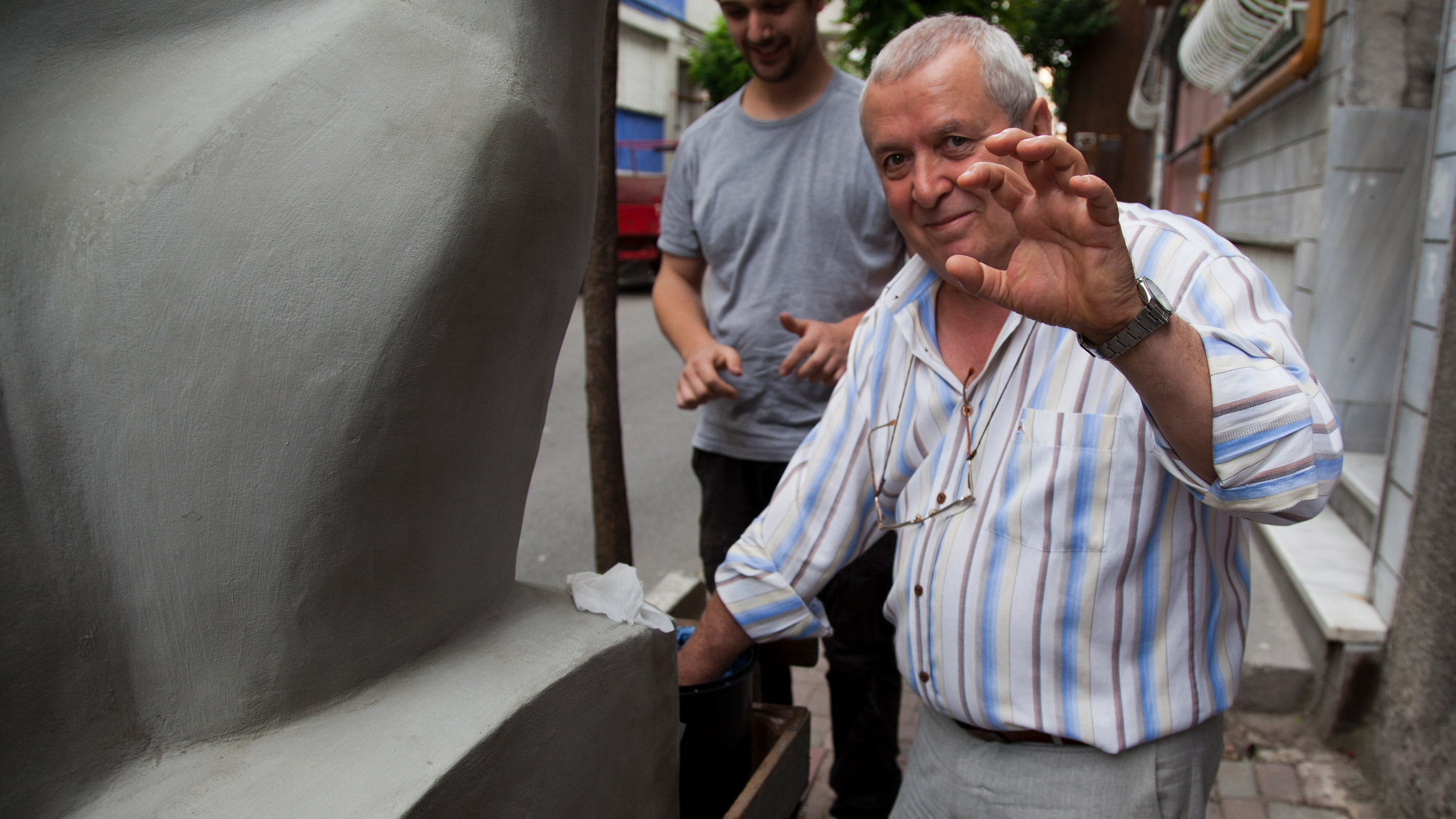 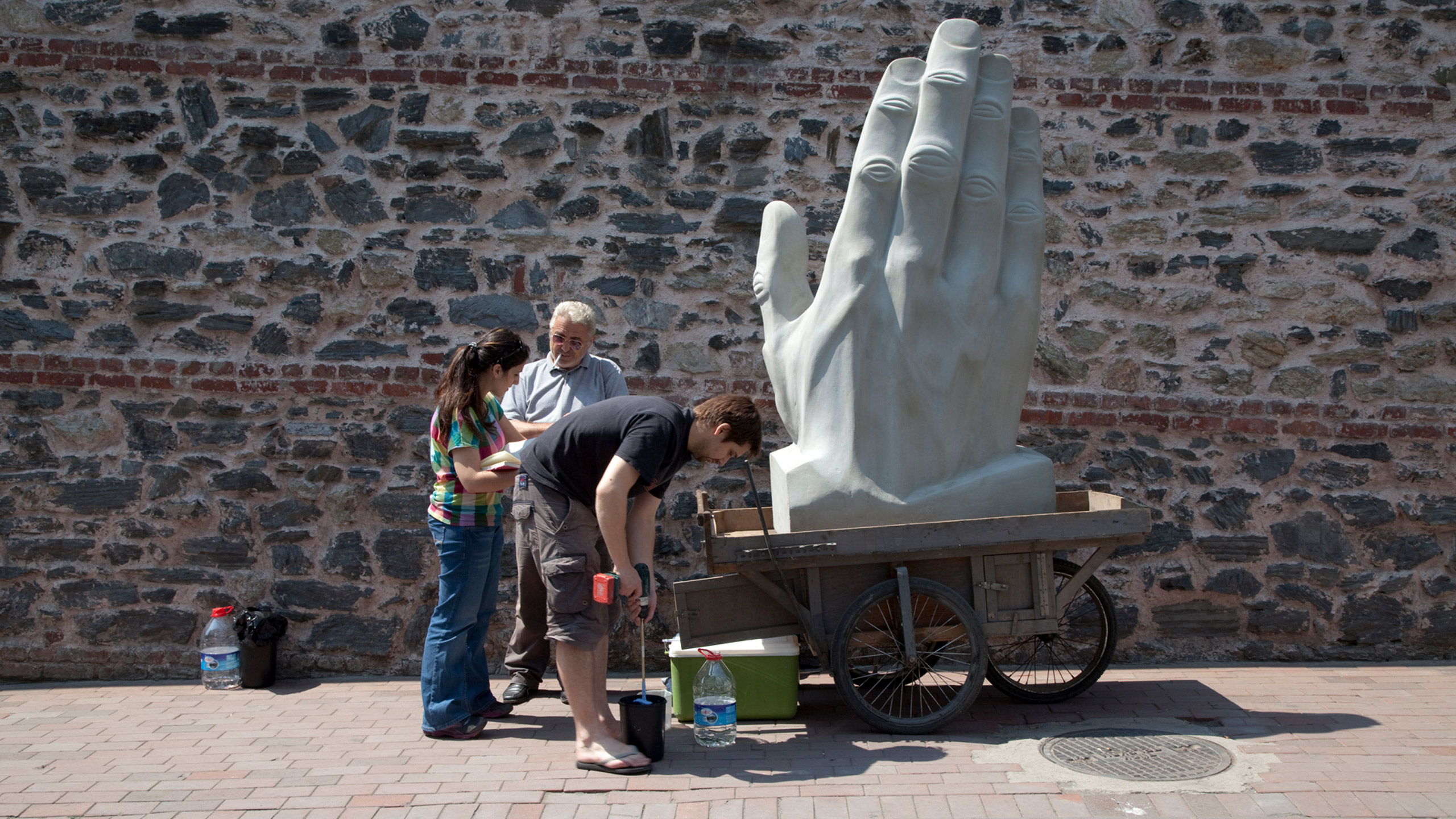 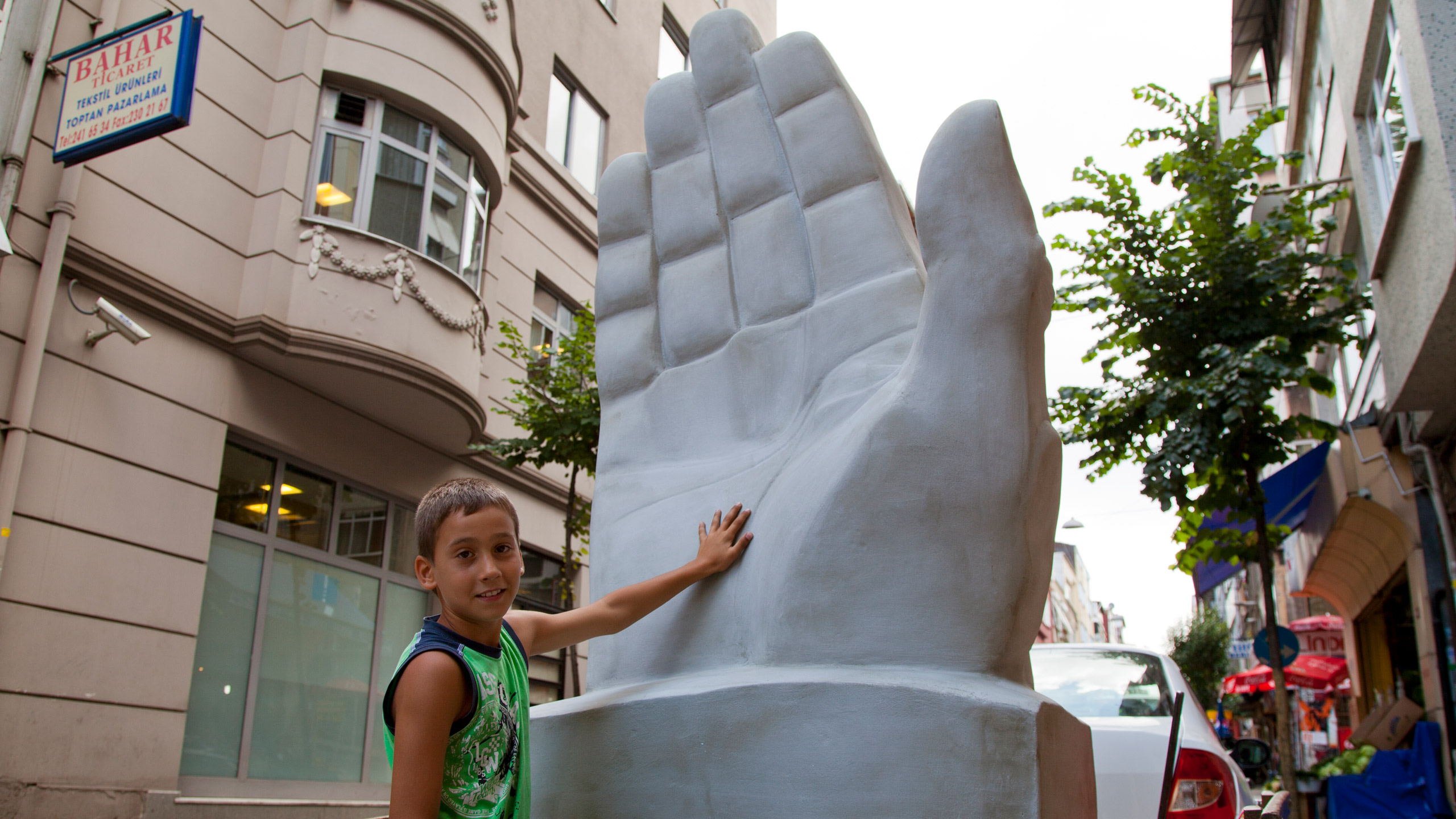 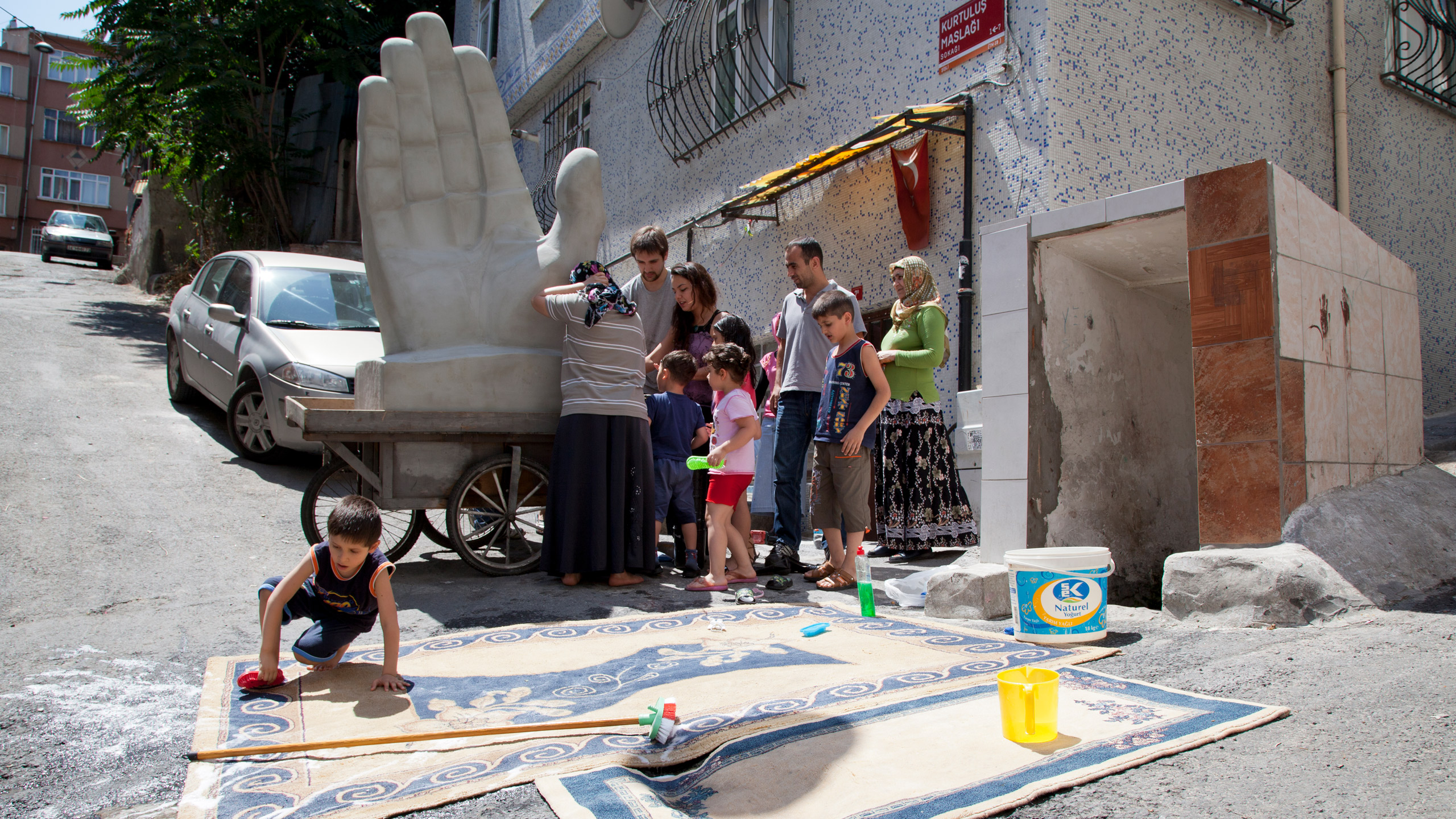 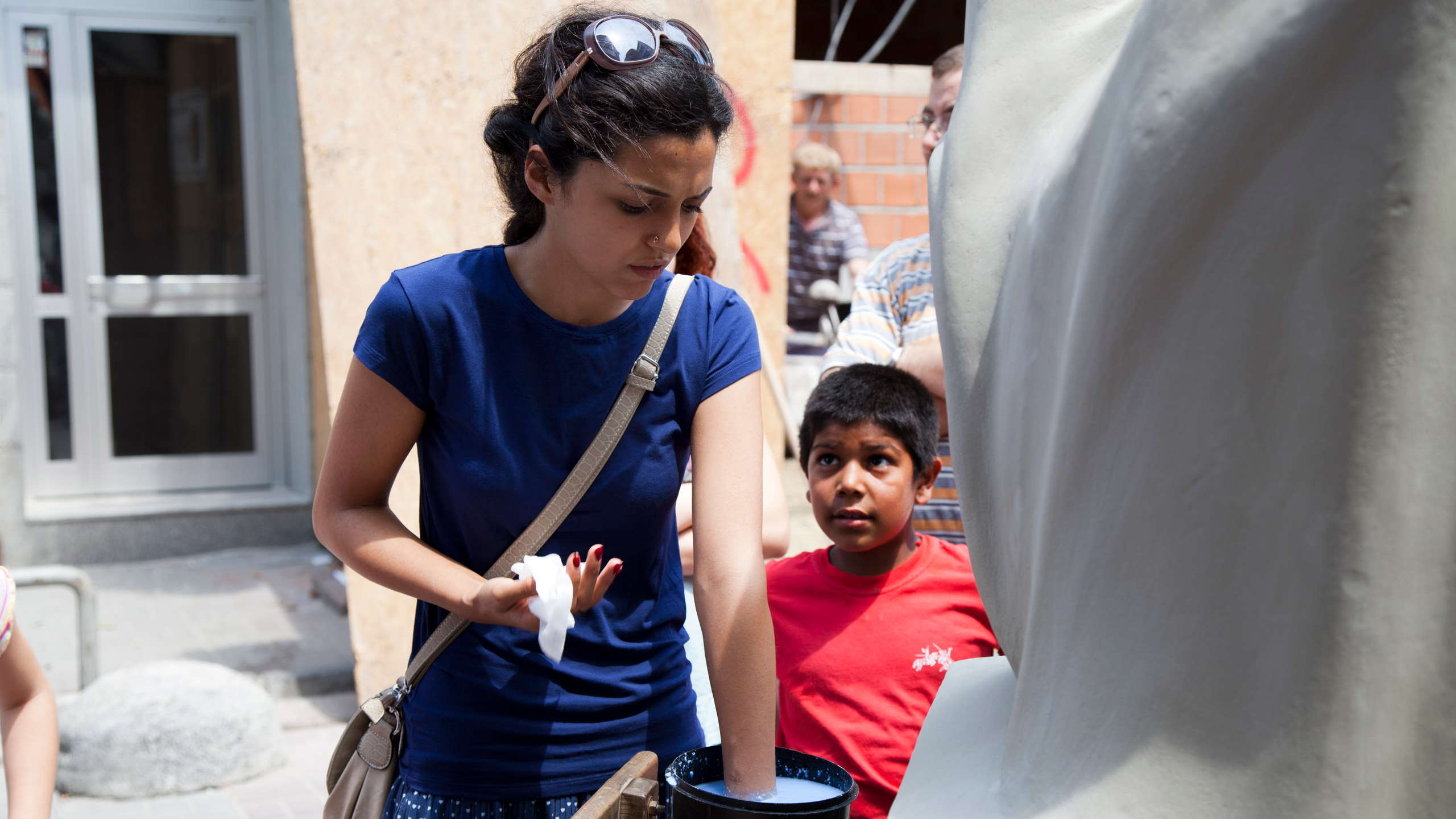 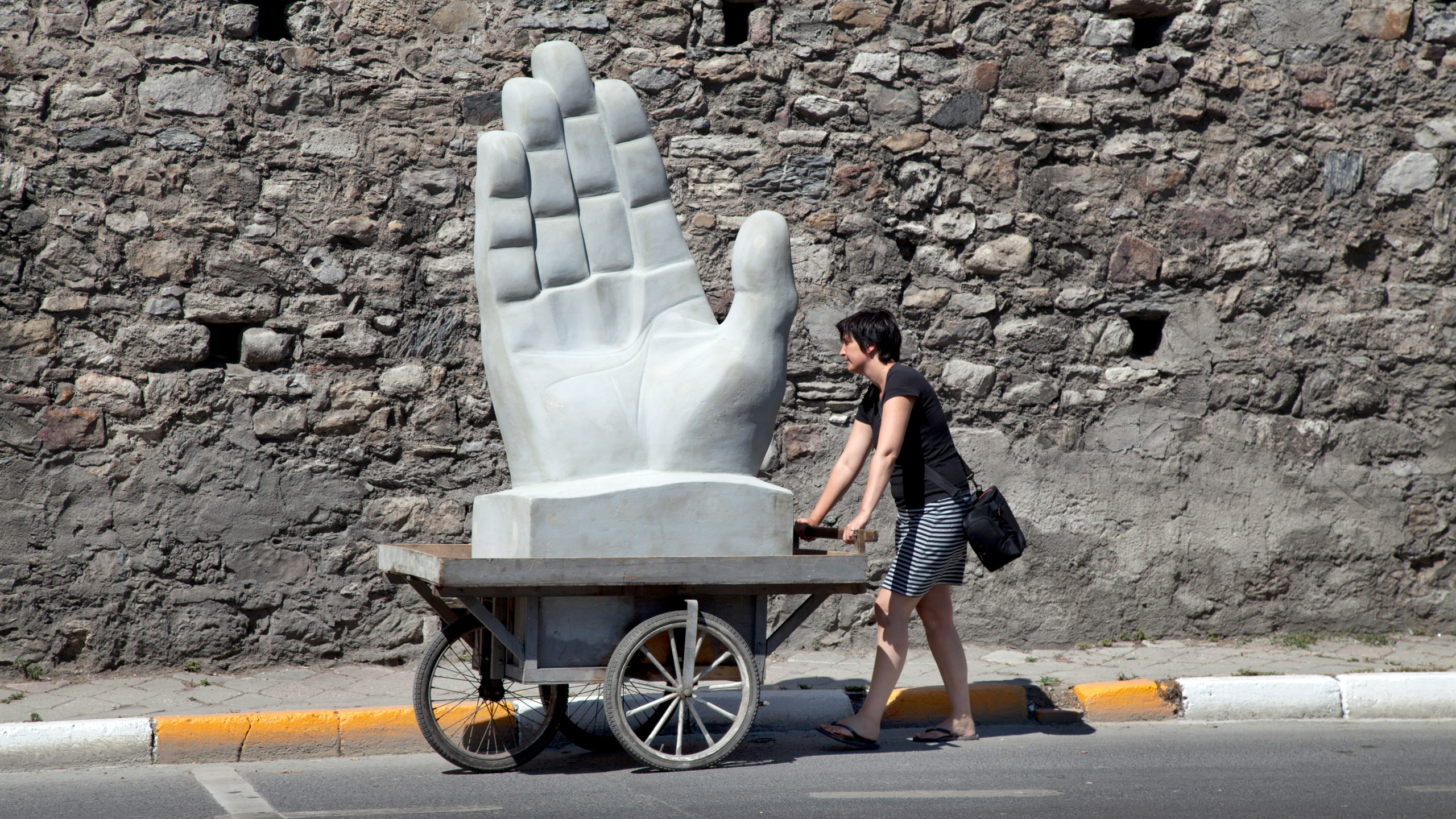 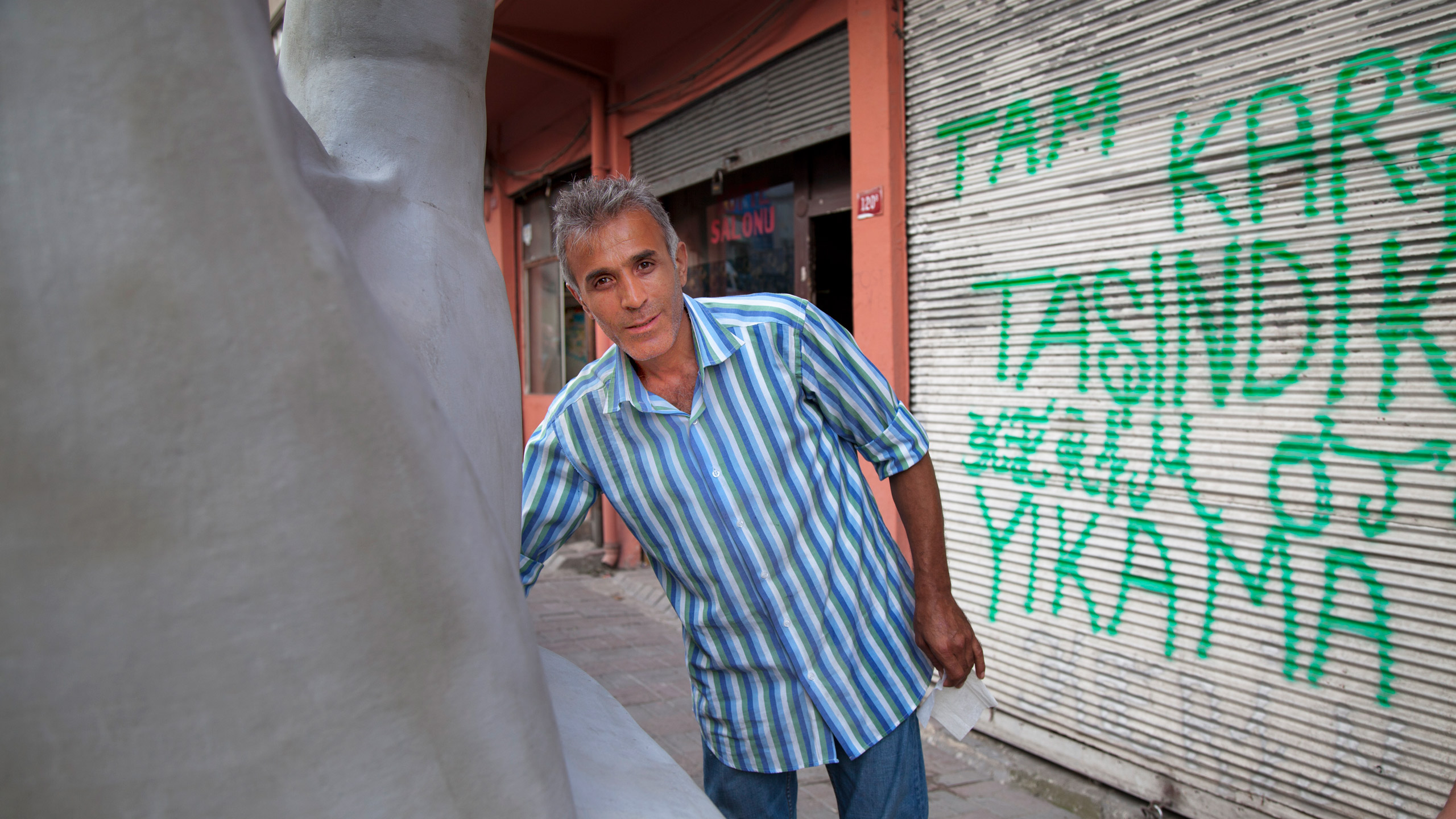 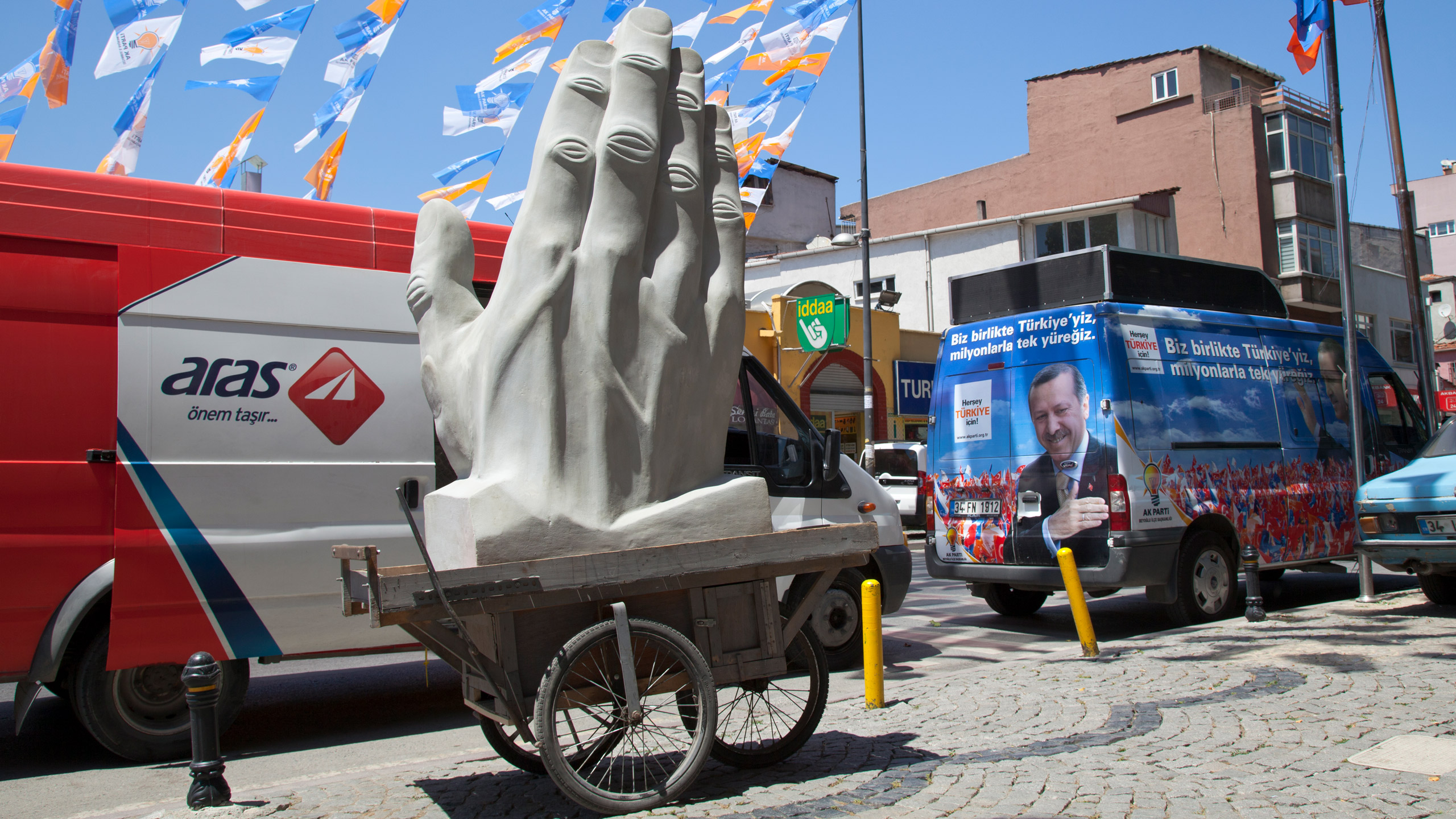 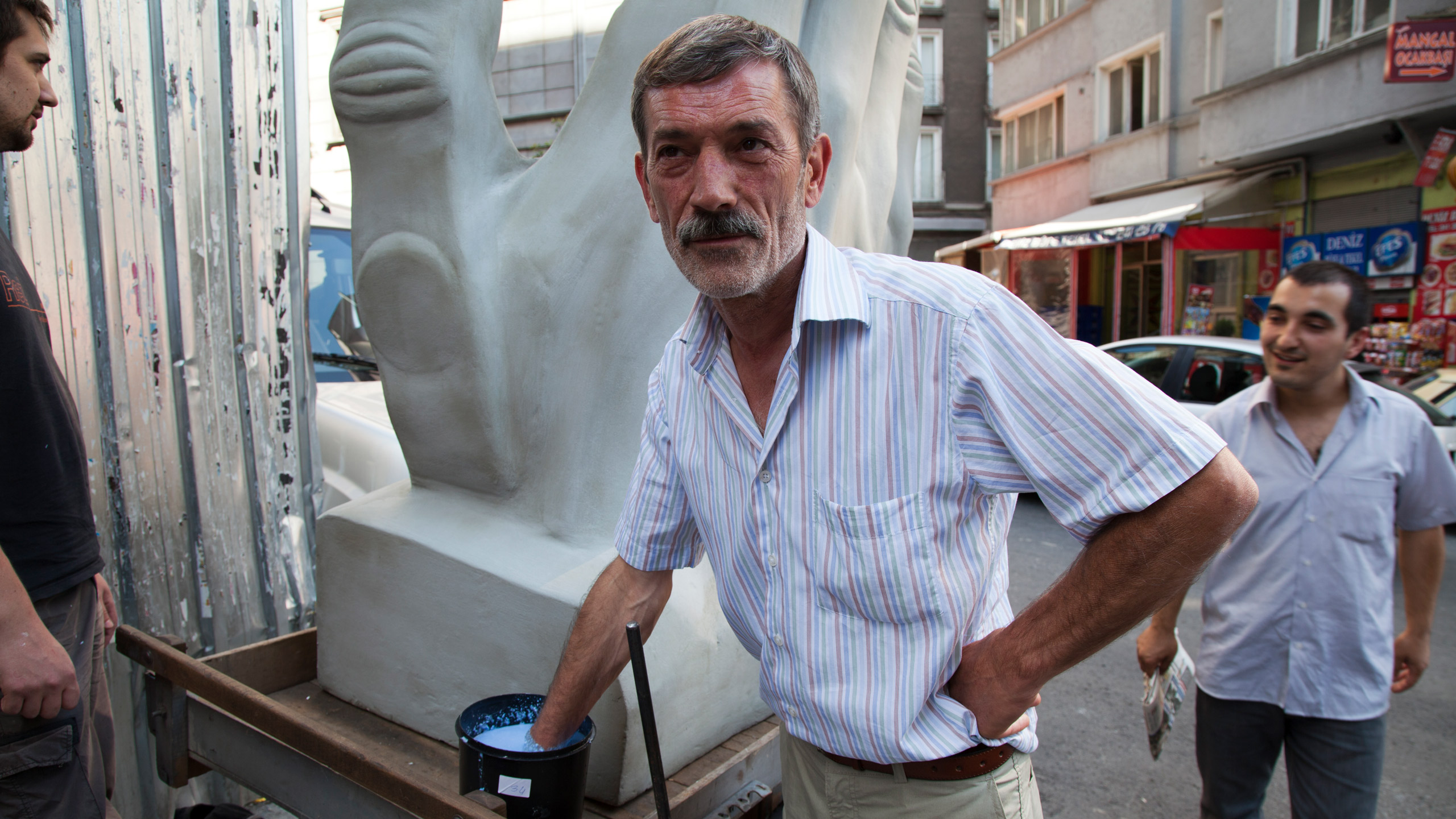 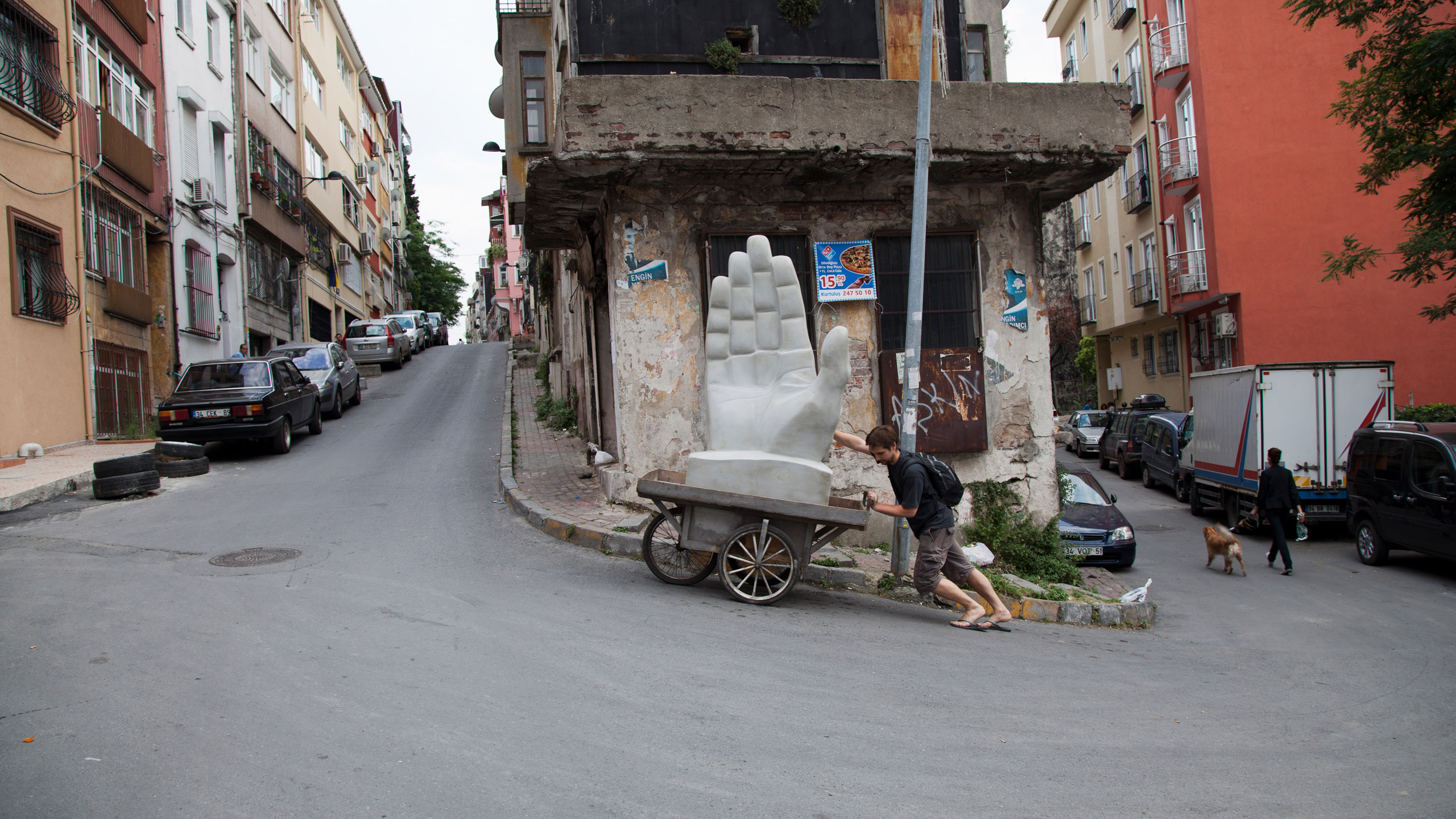 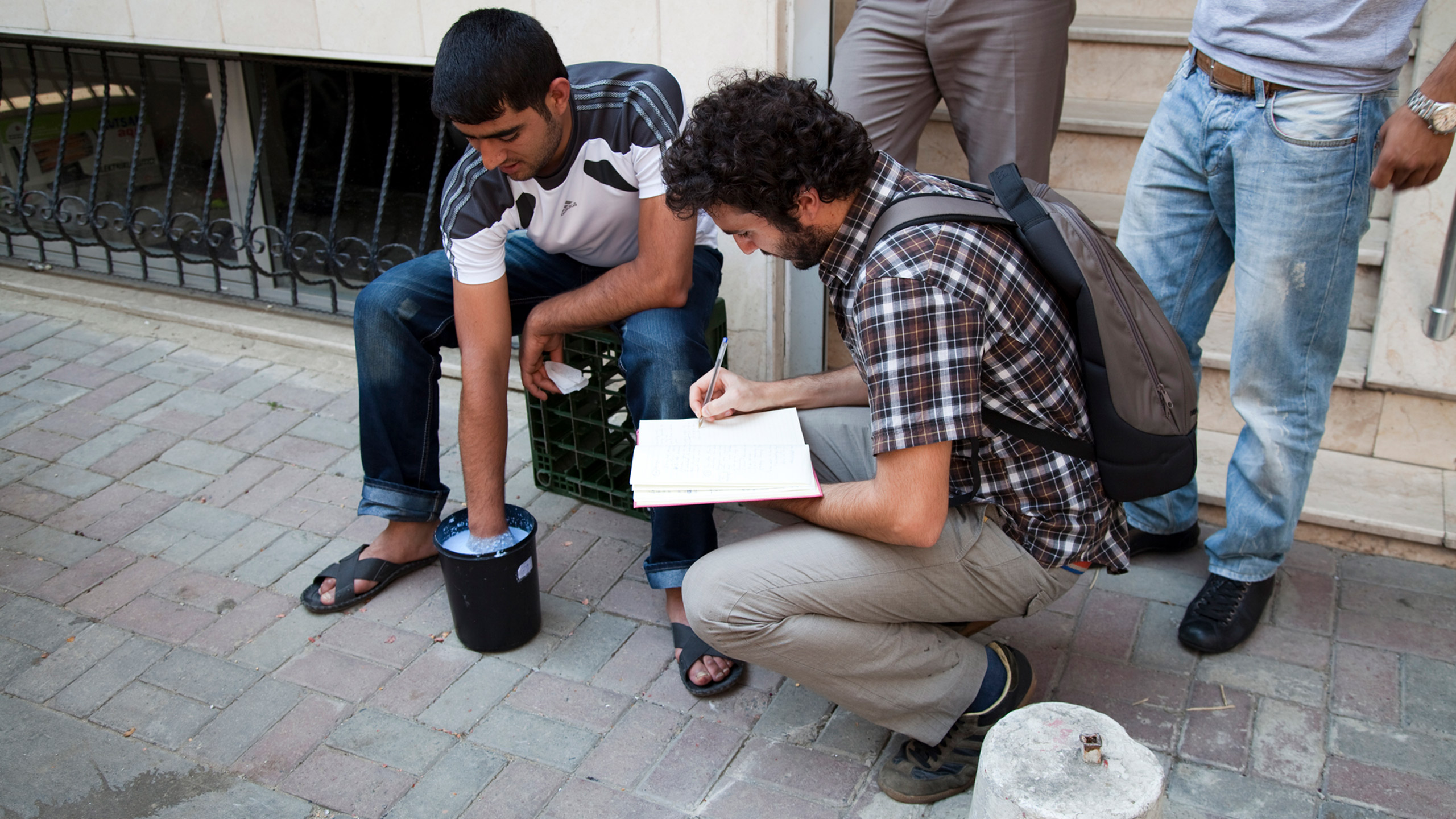 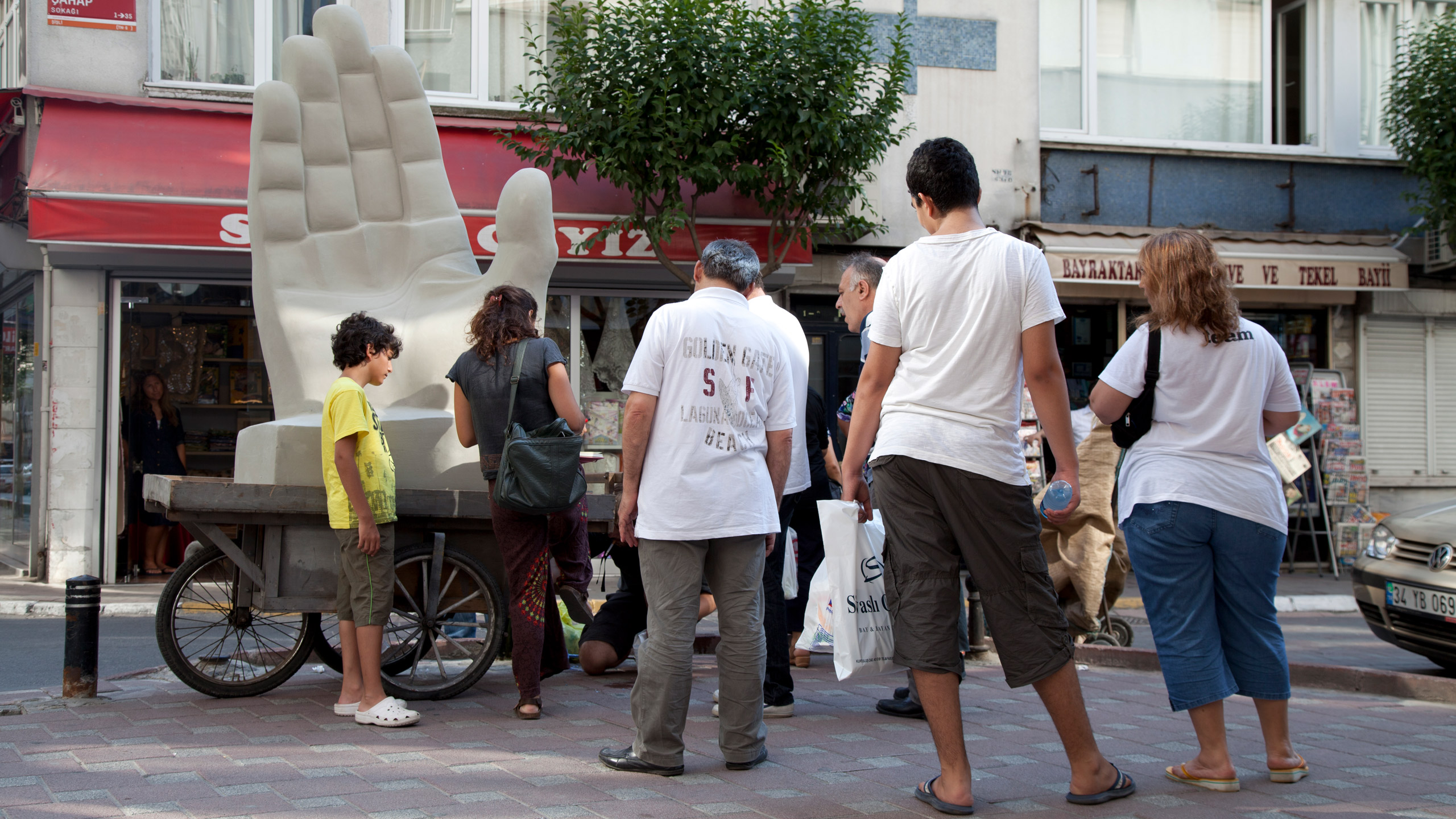 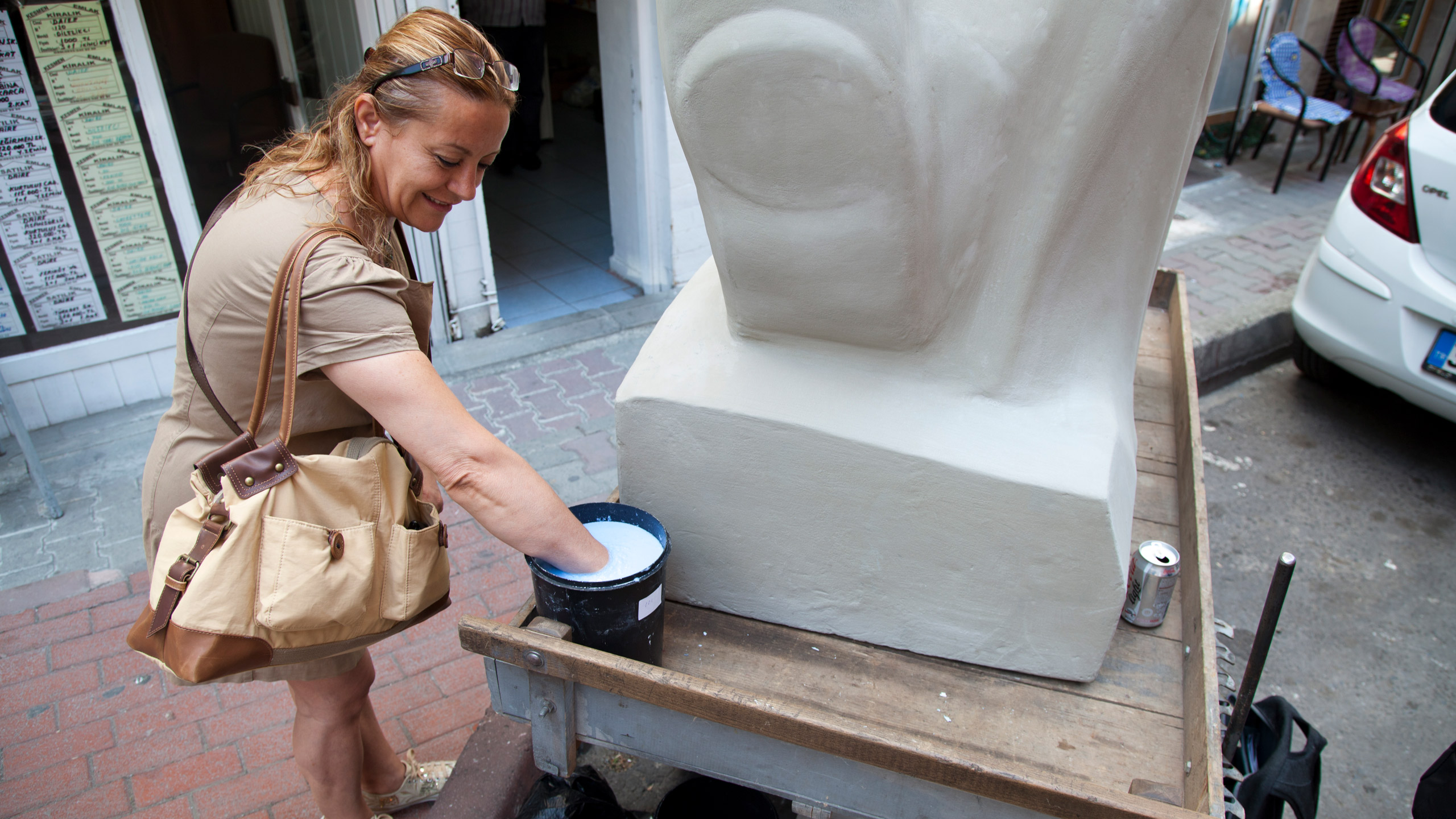 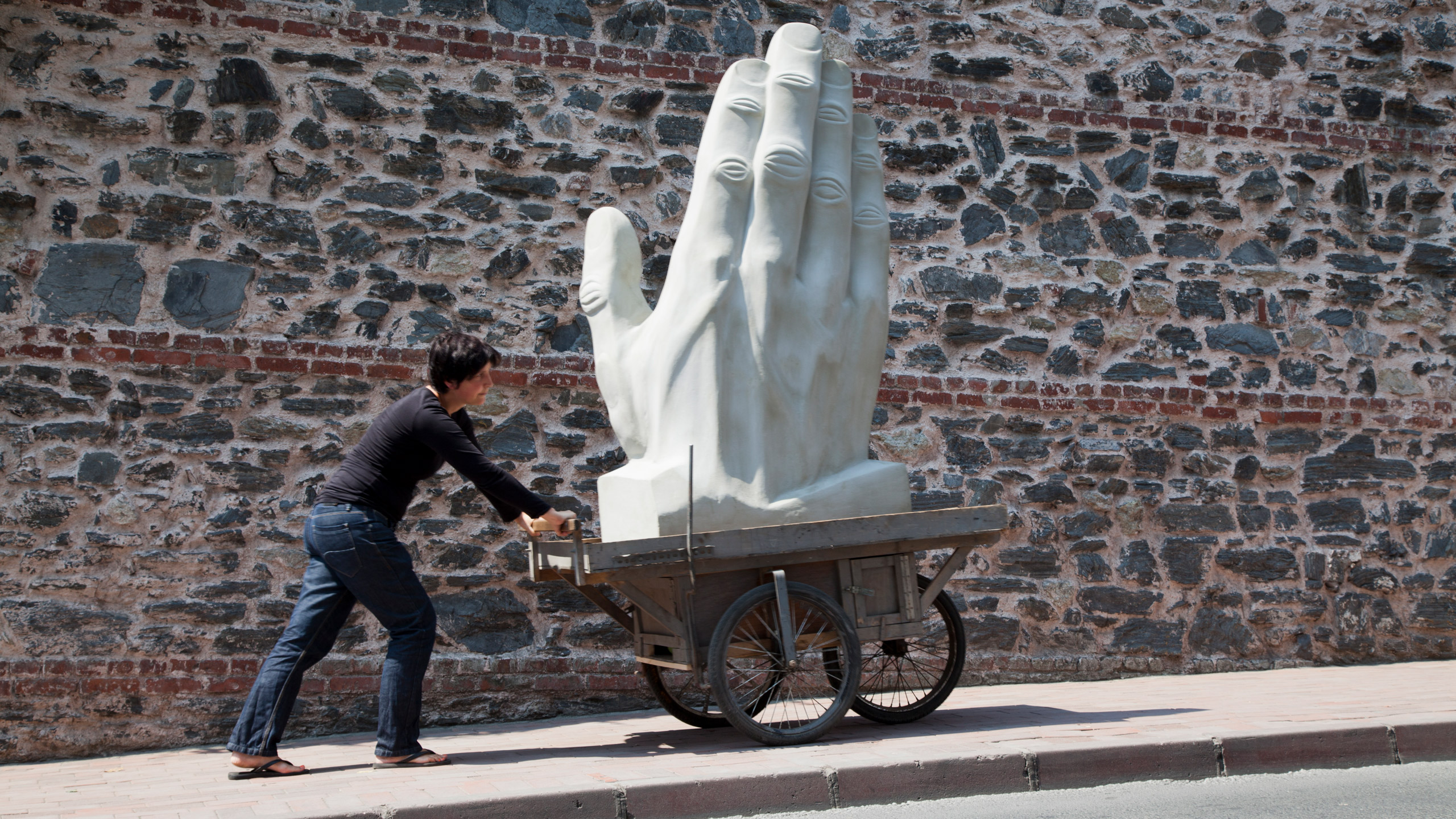 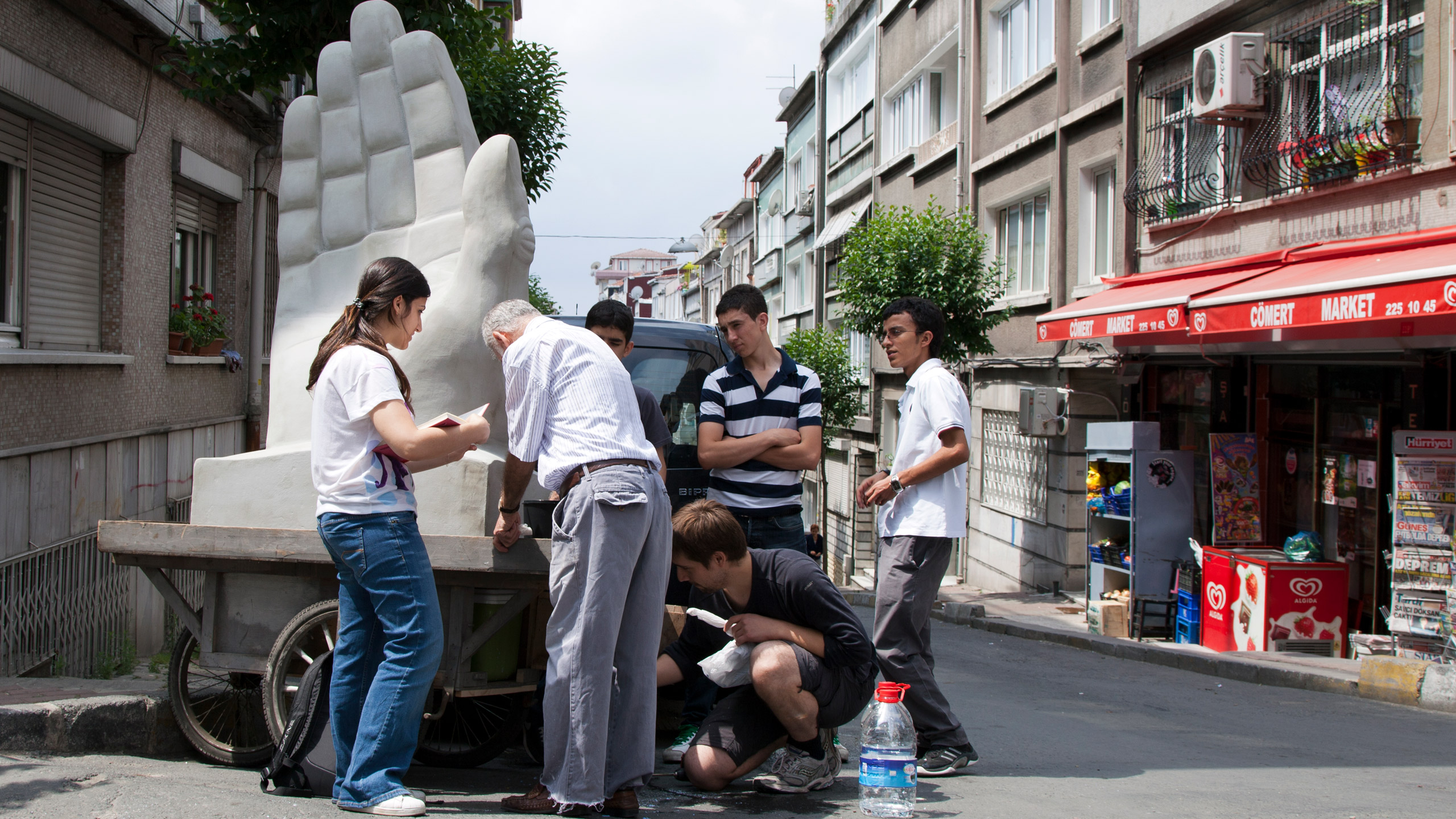 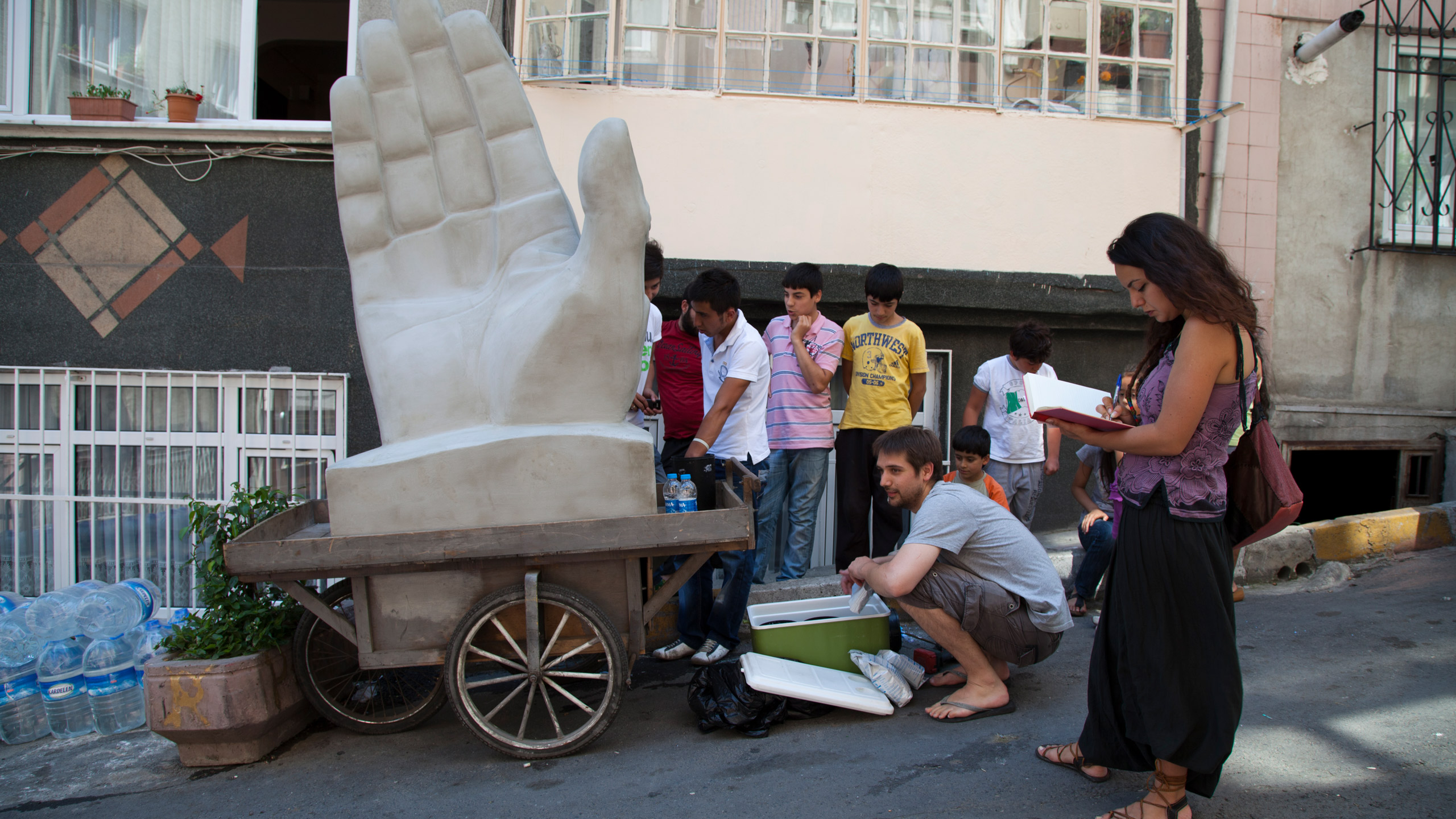 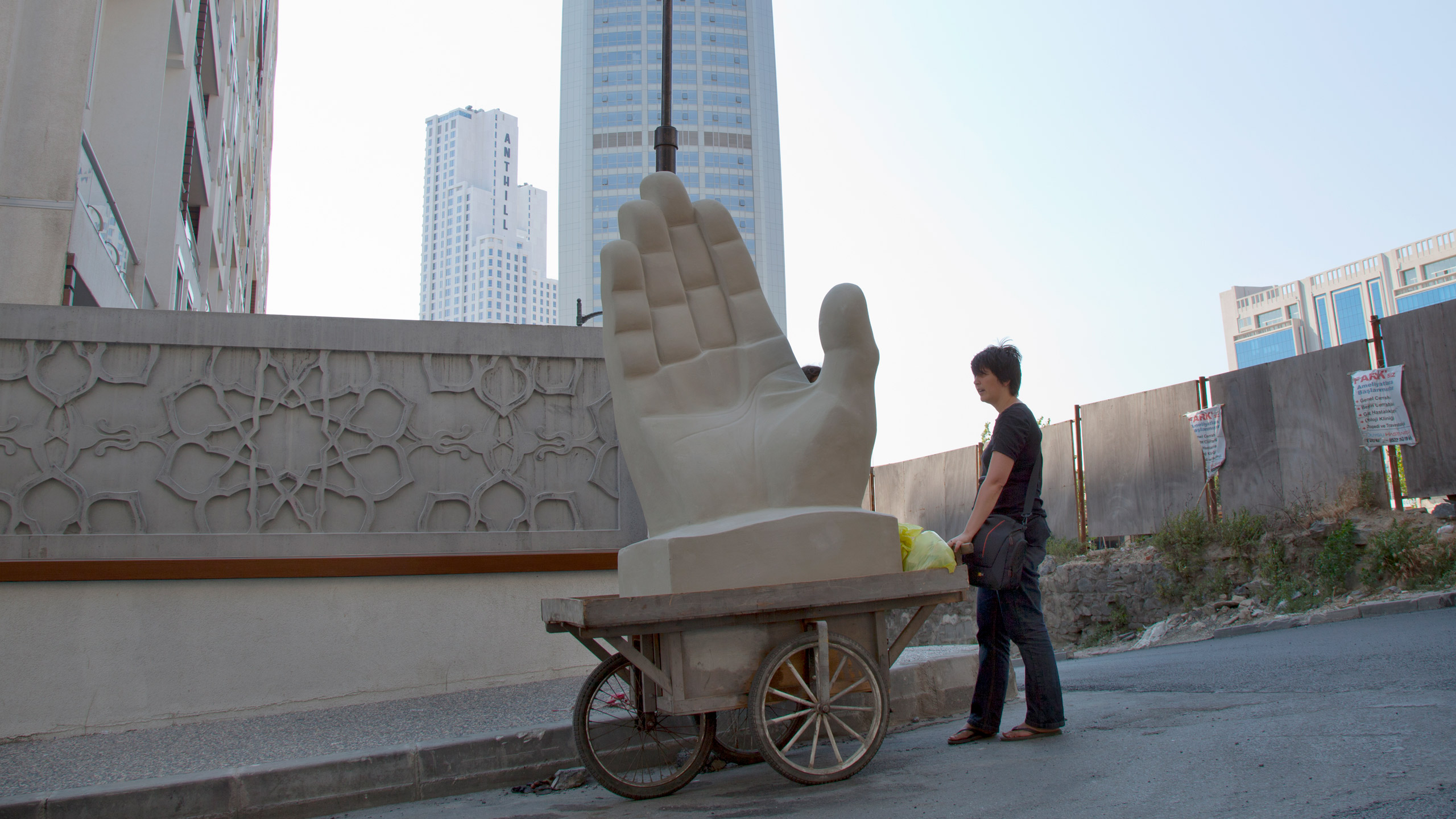 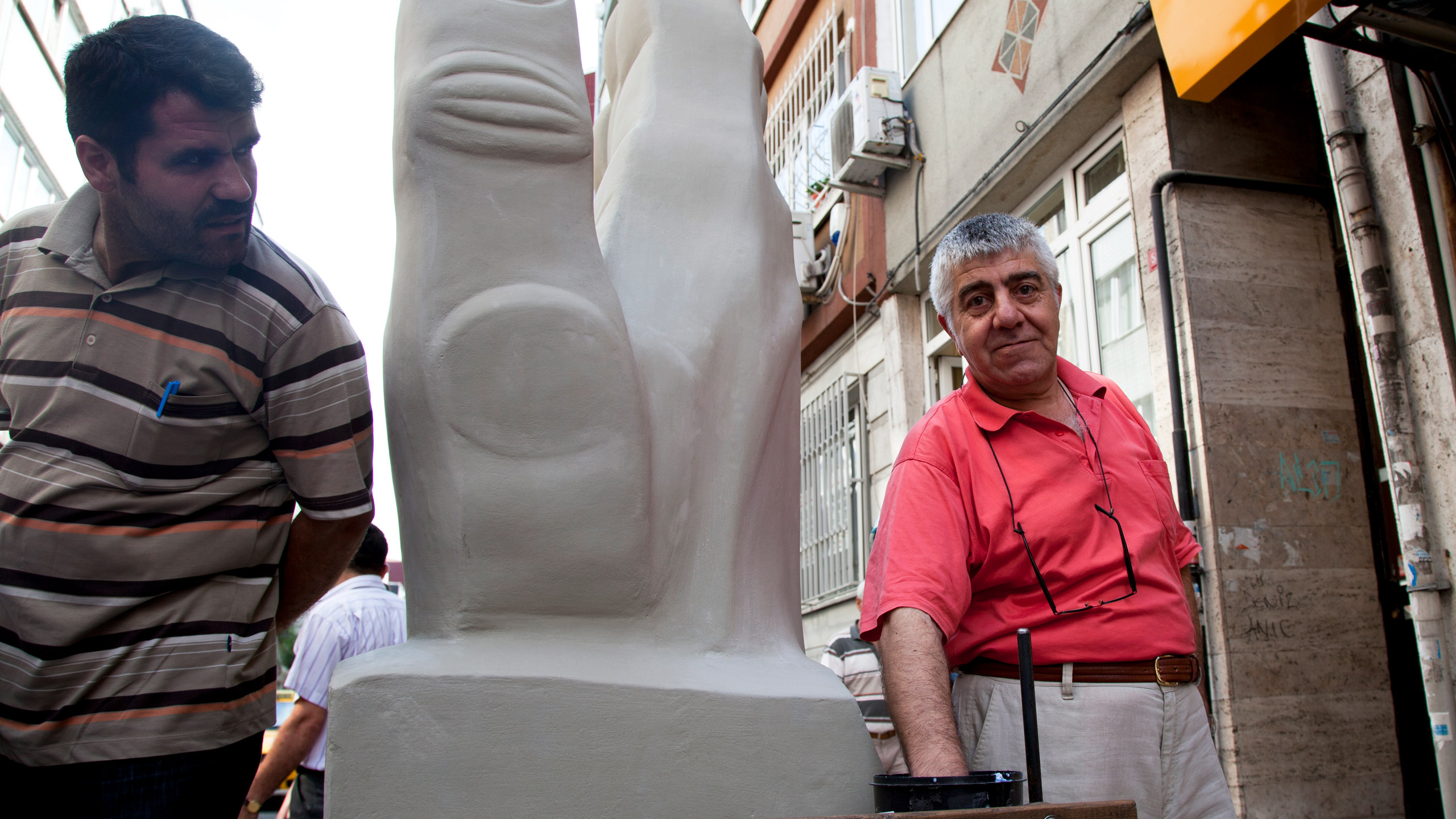 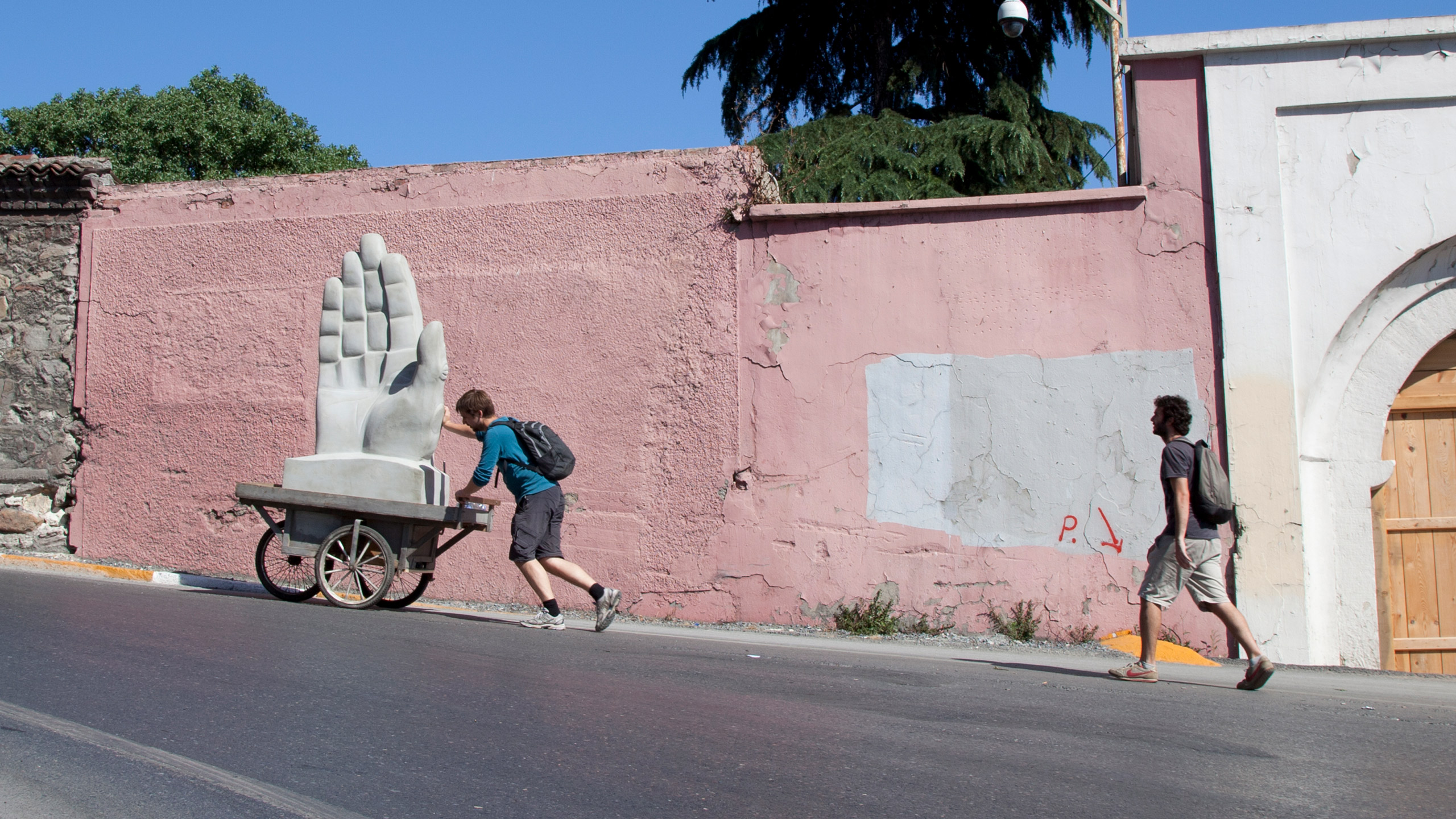 (Turkish for Monument to Humanity – Helping Hands) dealt with the demolition of a controversial monument in Kars, 2011. The project tried to offer a stage for a public debate on the topic through the construction of an alternative monument. A mobile studio was used as a catalyst for engaging the citizenry. While wheeling the cart through different neighborhoods in Istanbul, passersby were asked to lend a helping hand and contribute to the construction of a new monument. They were interviewed and a plaster copy of one of their hands was made. The plaster hands served as the building blocks for the new monument. After this intervention, the hands were installed on the site of the demolished sculpture. The interviews were published in a publication, together with pictures of the process.

In 2011, the demolition of a controversial monument in Kars, a small historical city on the border between Turkey and Armenia made the headlines. The monument was located outside the city and consisted of two concrete figures, both 35 meters high. The sculpture, called ‘Monument to Humanity’, was designed by the sculptor Mehmet Aksoy and symbolized reconciliation in the relations between Armenia and Turkey.

In January 2011, Prime Minister Recep Tayyip Erdogan visited Kars and further sparked the debate around the Monument to Humanity, calling it “freakish” and demanding its demolition. Soon afterward, the sculpture was cut into 18 pieces and dumped in a nearby junkyard. Some say that Erdogan used the political momentum resulting from the sculpture’s demolition to gain nationalist votes in that year’s election.

The symbolic image of the mobile studio referenced the deplorable state of the original monument: it consisted of a junk-cart with a copy of the hand sculpture placed on  top. The hand was an important element of the former monument to humanity. When the construction was put on hold, the sculpture was almost completed. The only missing element was the right hand of one of the figures. For years, this last segment stood at the base of the sculpture, waiting to be attached to the amputated arm. The Hand of Friendship, as it became known, functioned as a visual promise of peace.

While wheeling the junk-cart through the city’s neighborhoods, people were asked to give a helping hand and contribute to the construction of a new monument by giving permission to make a plaster copy of one of their hands. Molds of volunteers’ hands were made on the spot, and the people were interviewed about their personal views of the construction and demolition of the monument. The plaster hands served as building blocks for the new Monument to Humanity in Kars

After the intervention in Istanbul, the hands were transported to Kars and installed on the site of the demolished sculpture. In less than an hour, the police arrived and the temporary monument was broken down.