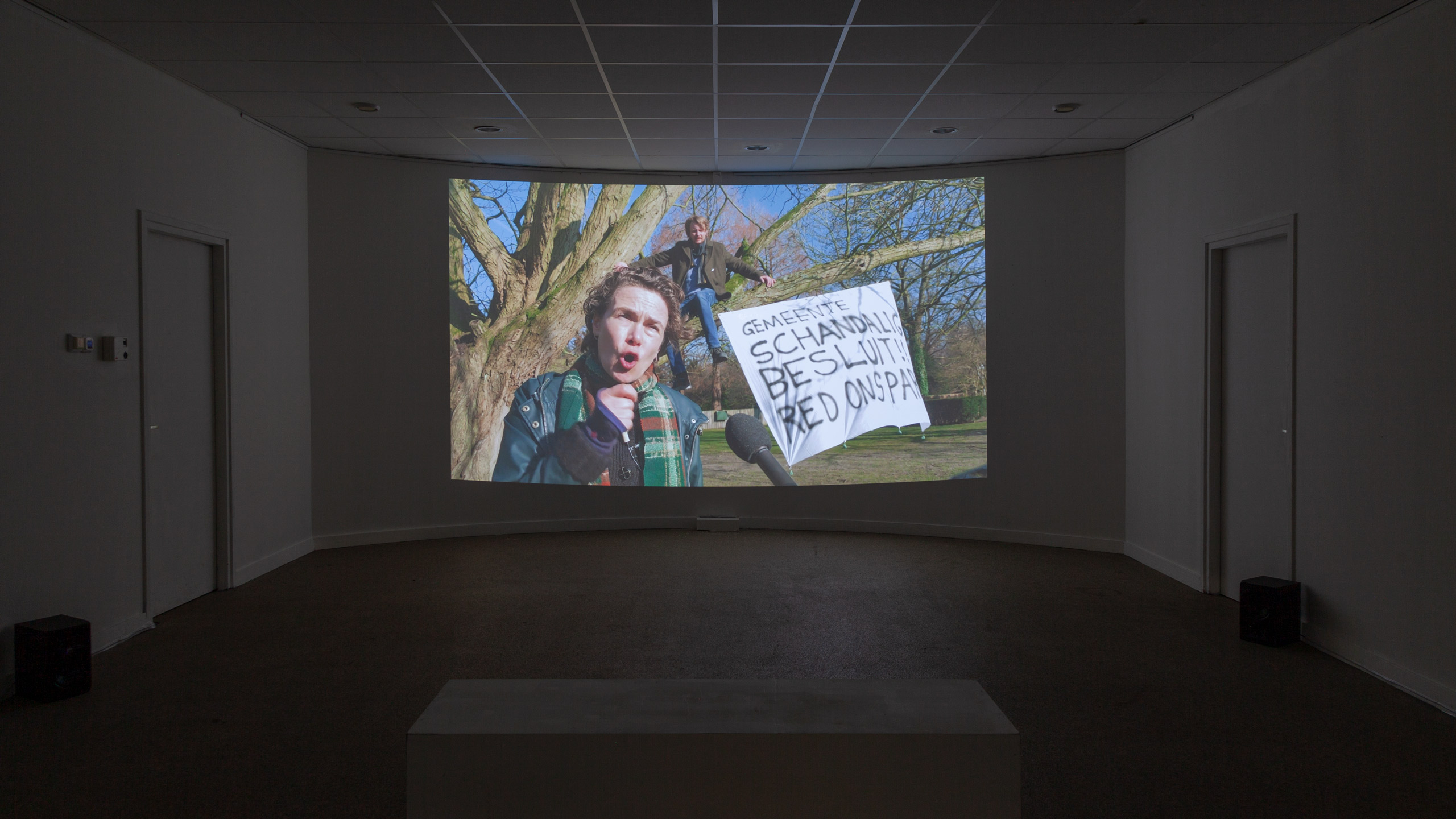 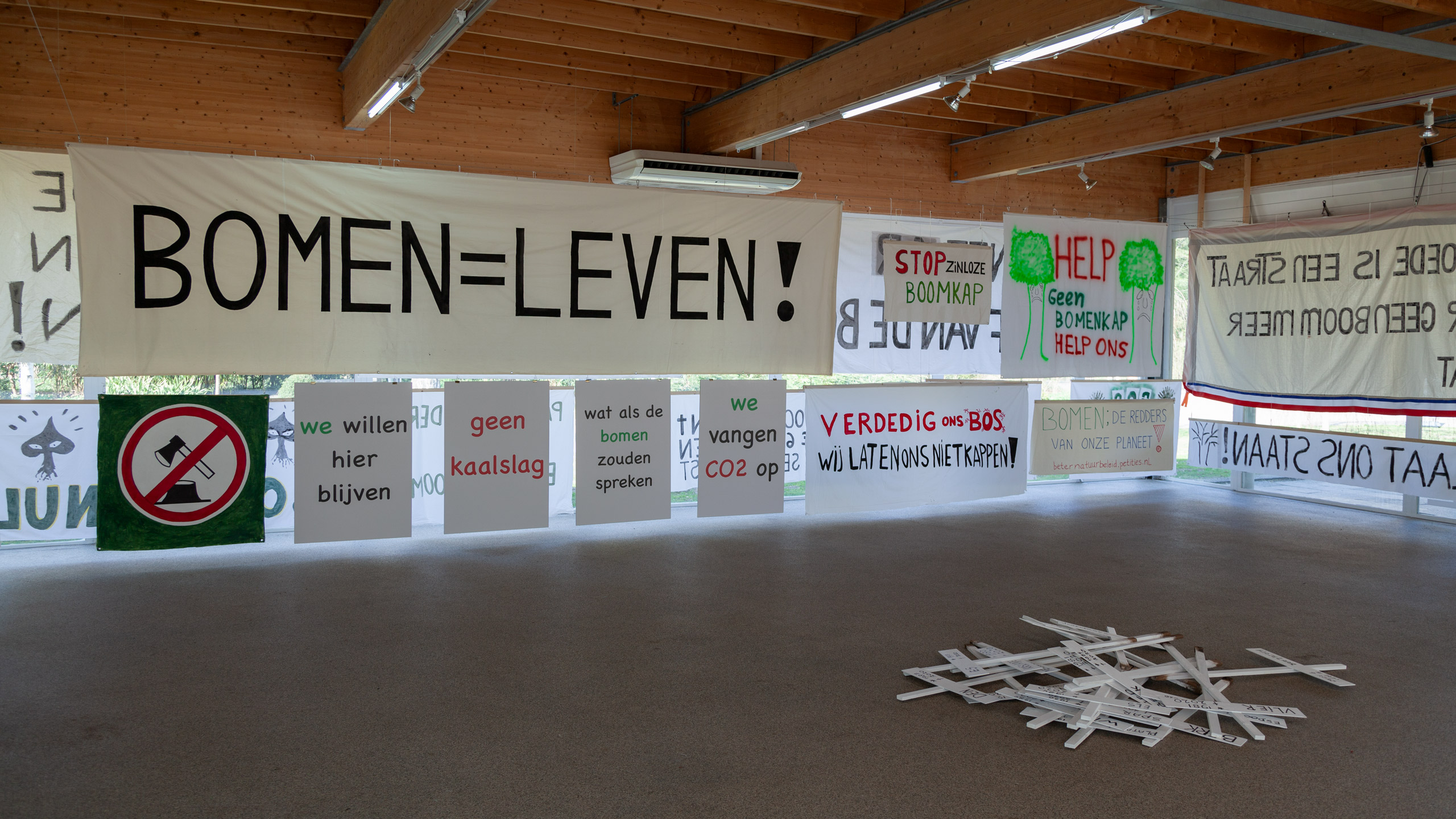 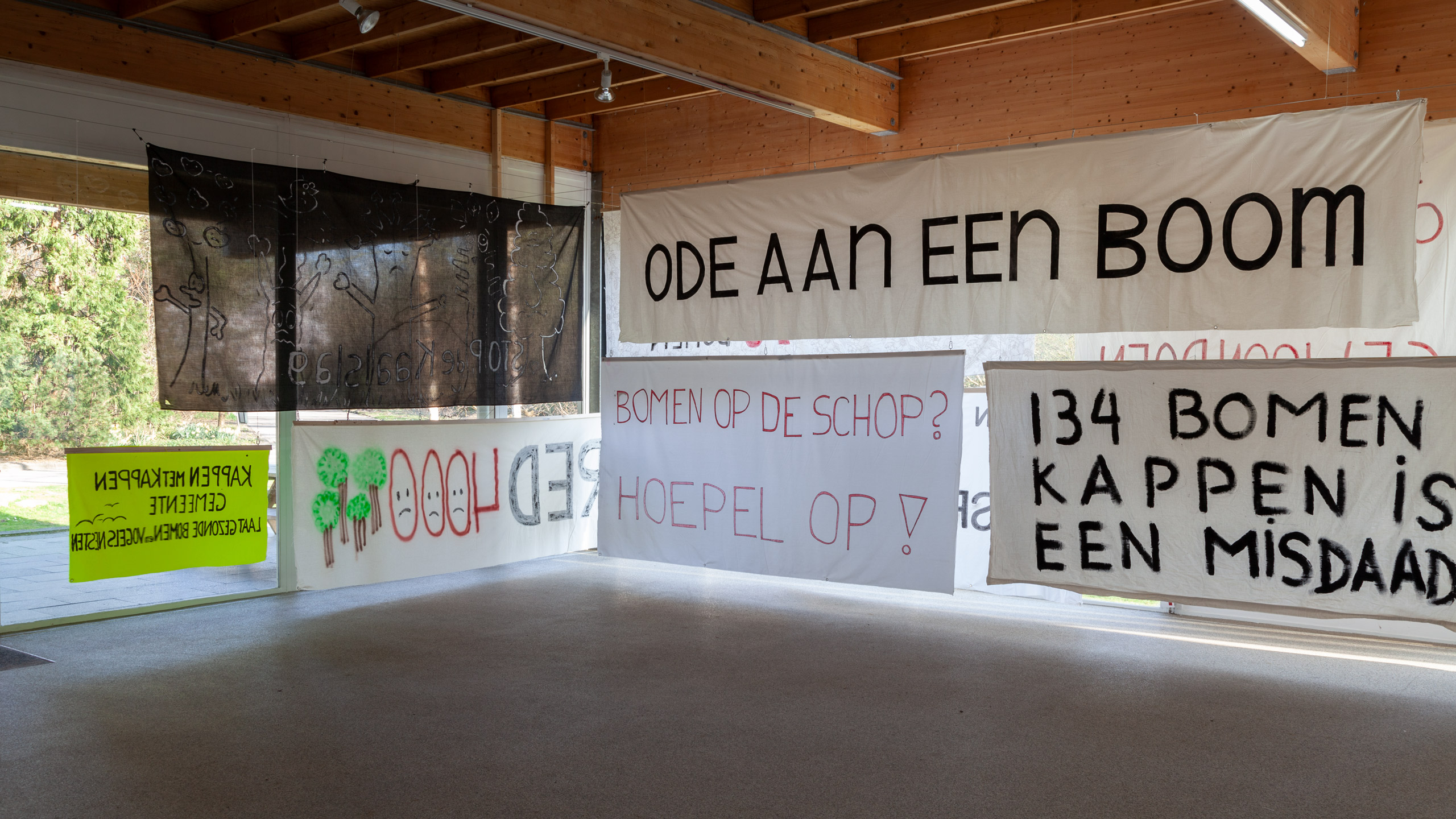 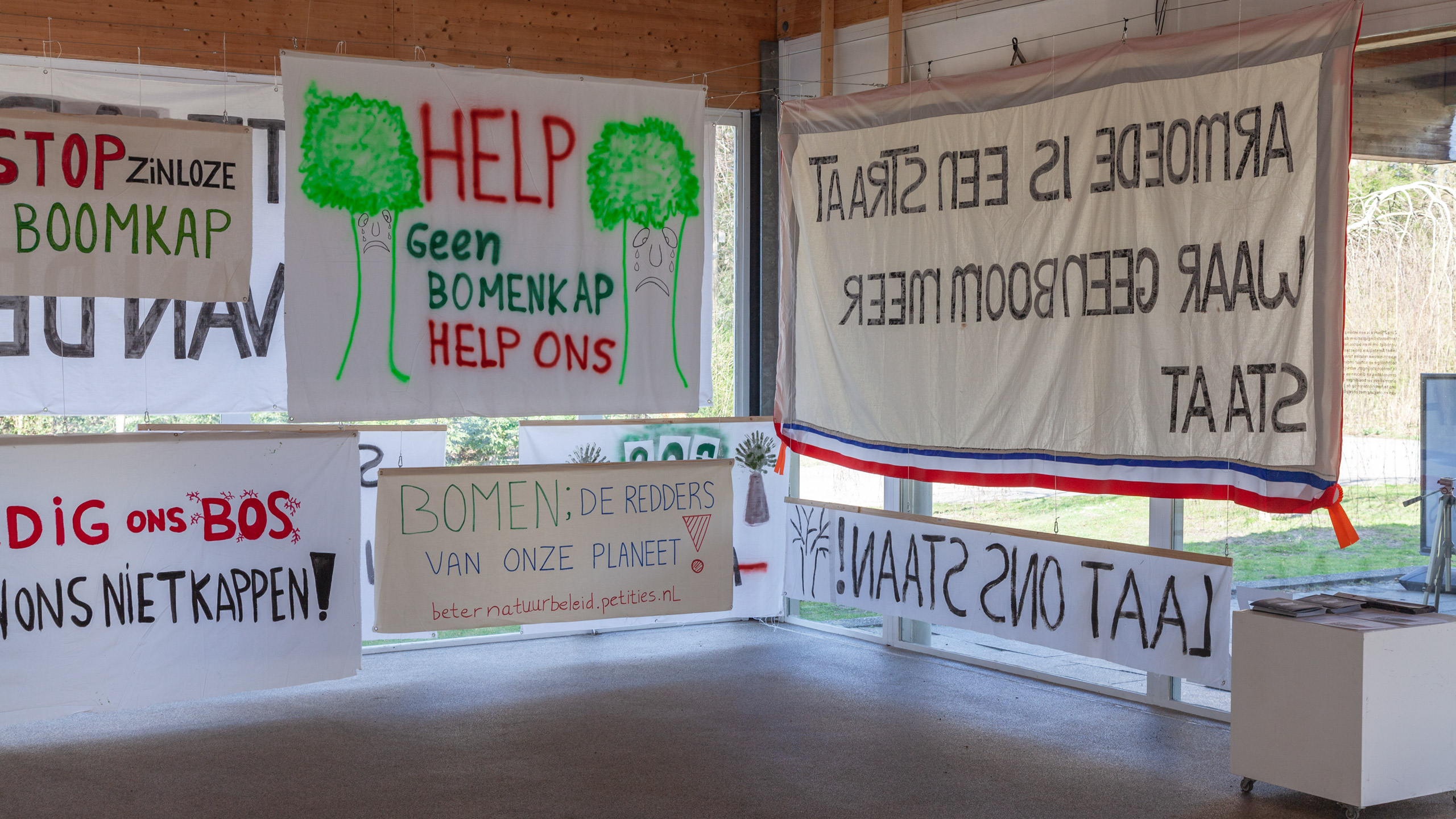 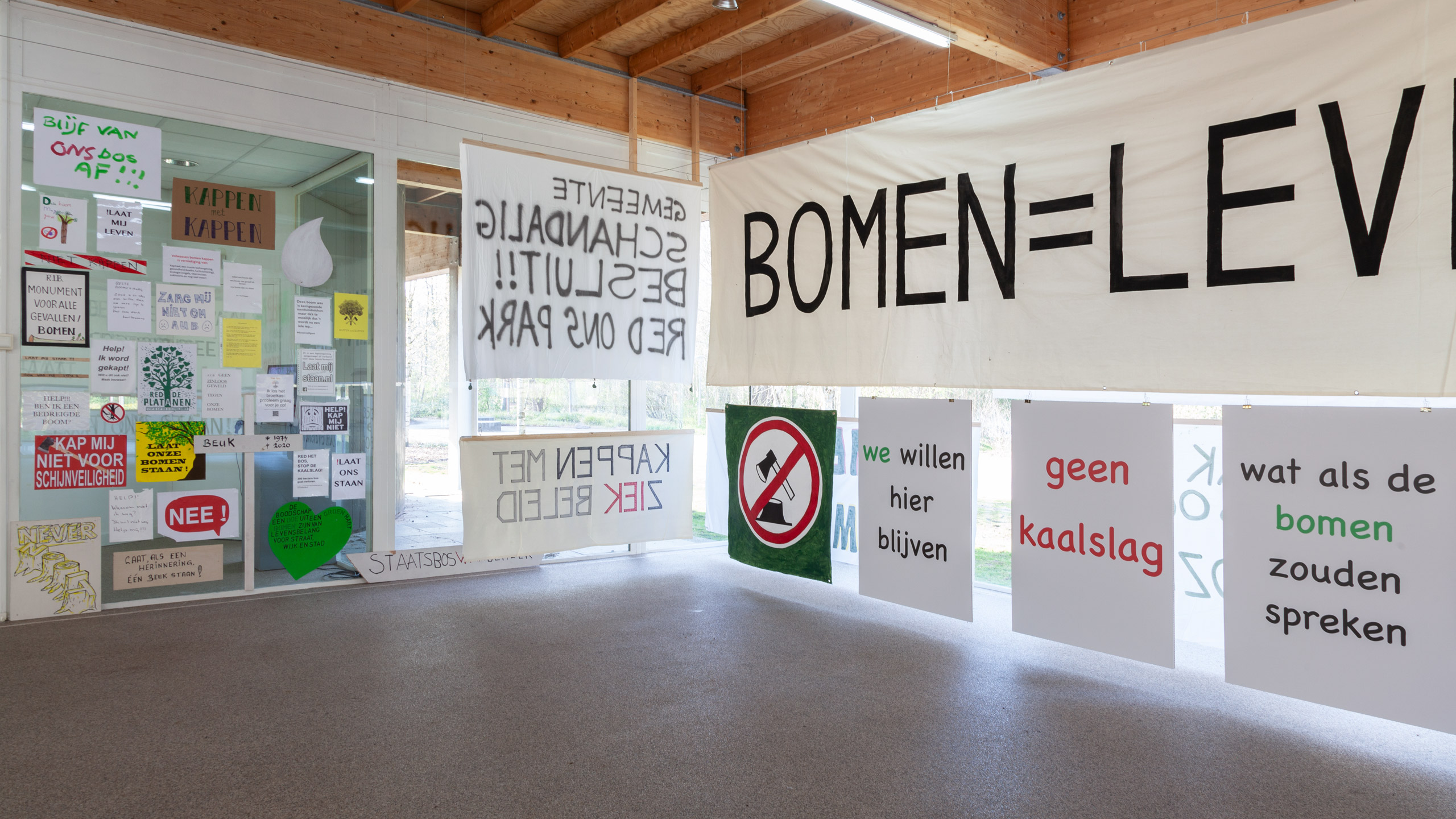 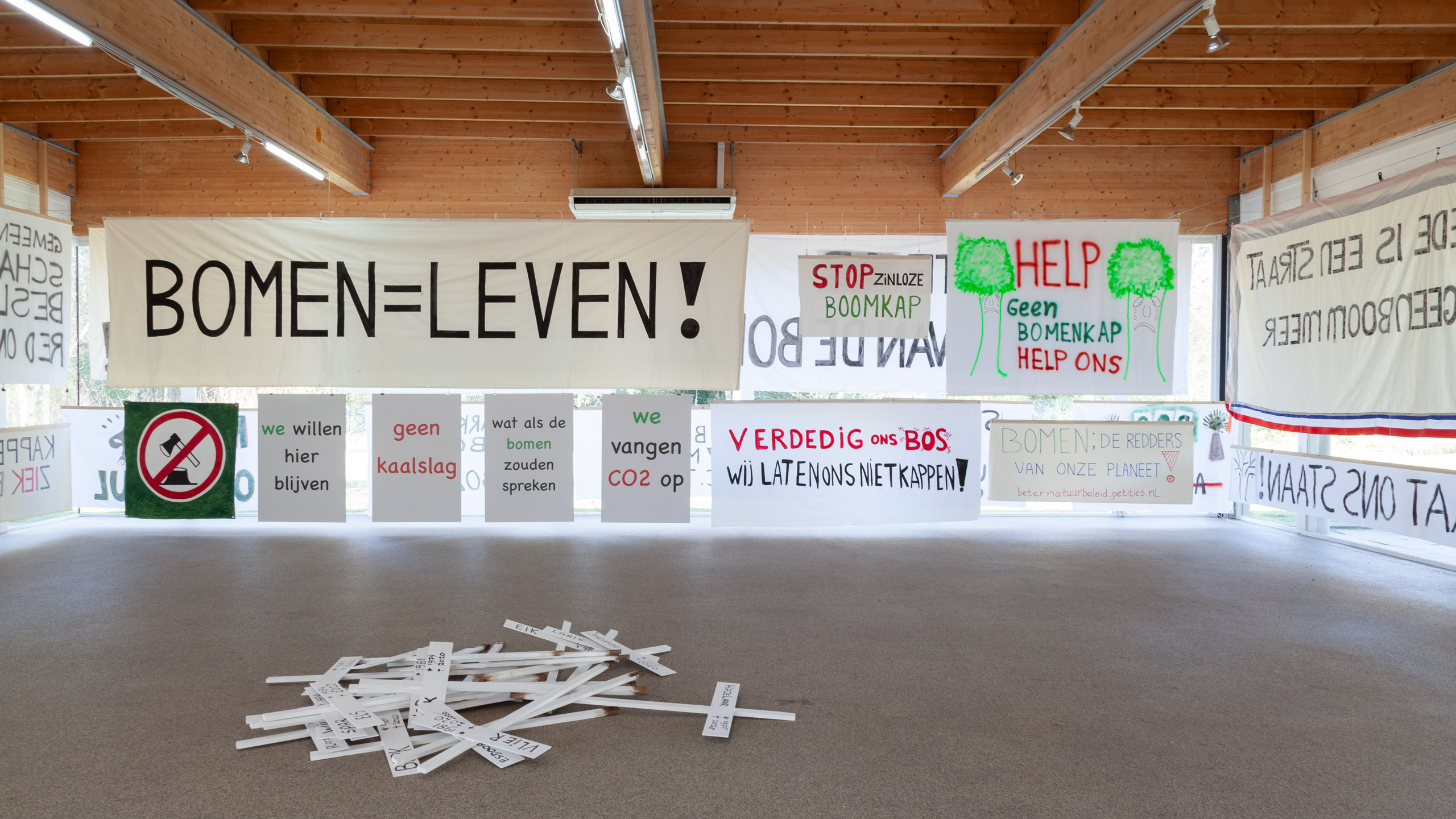 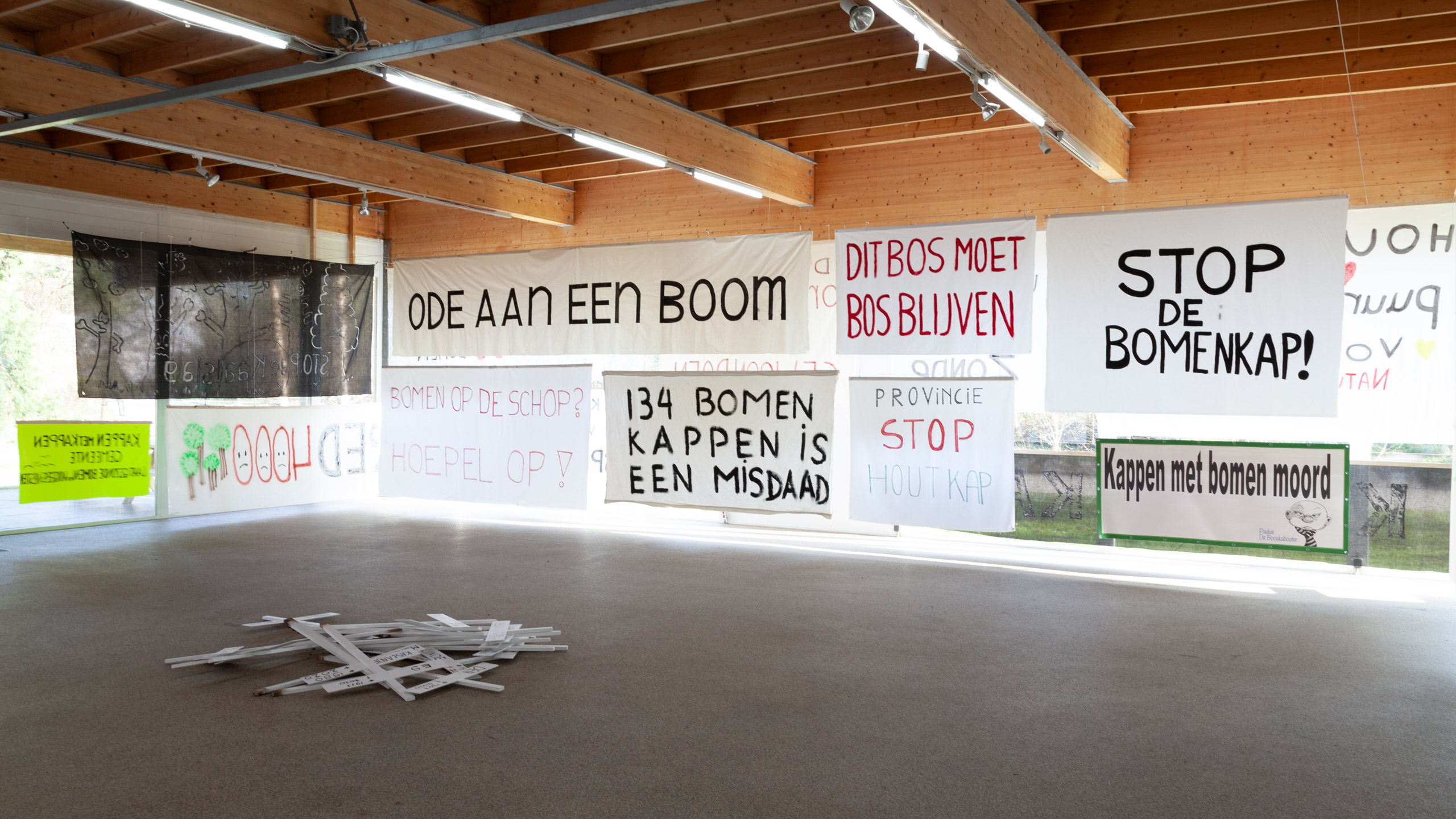 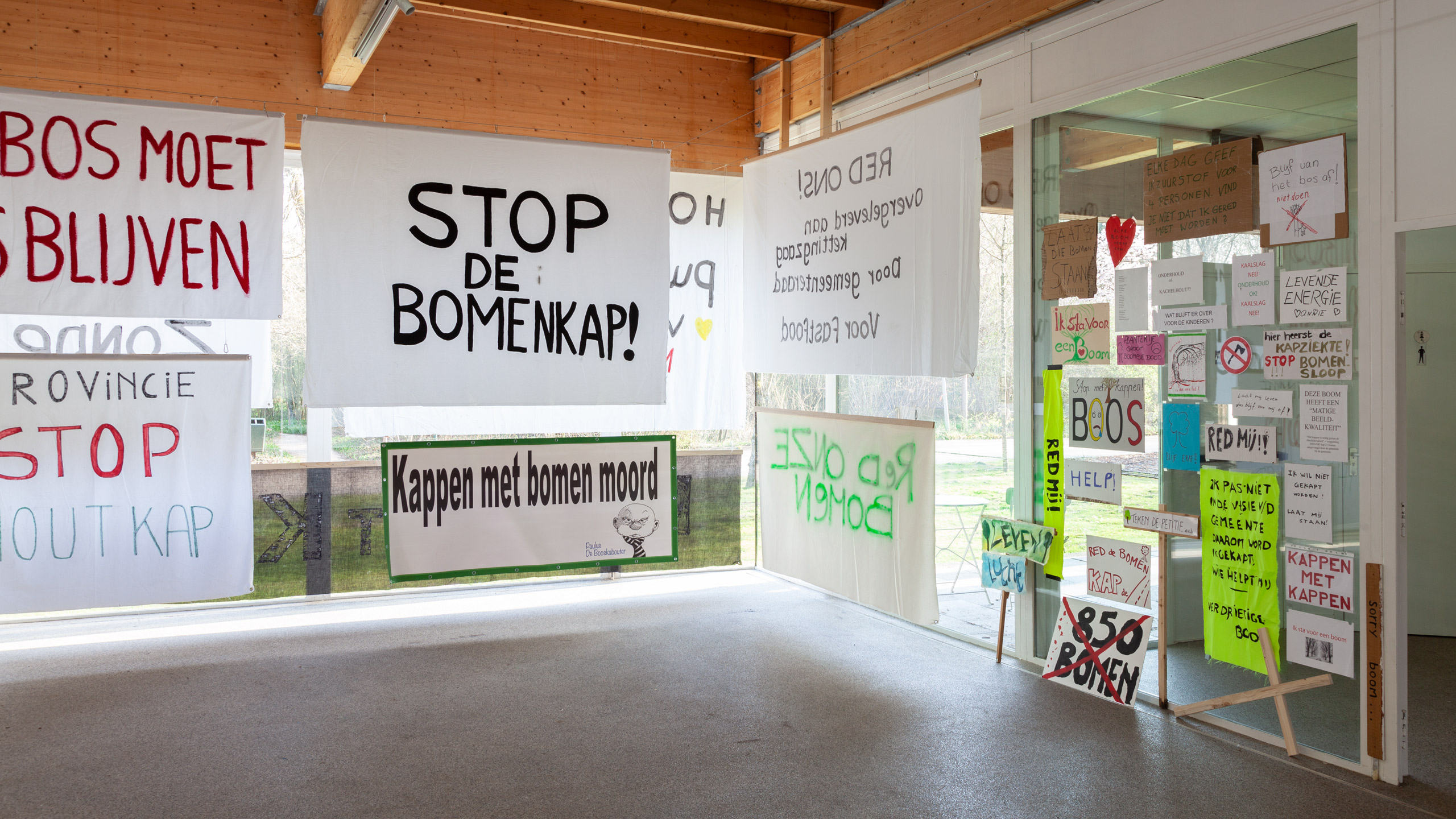 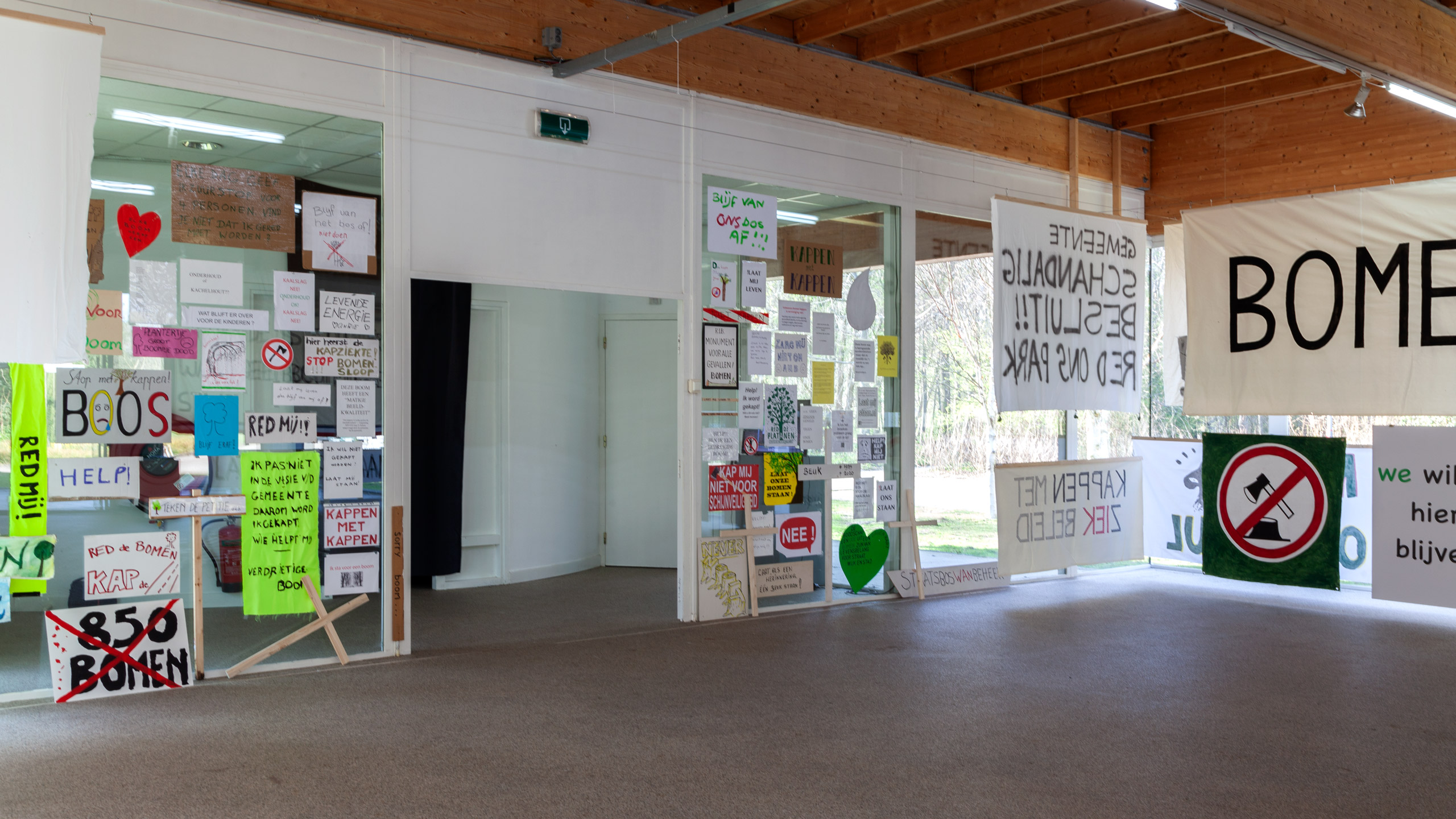 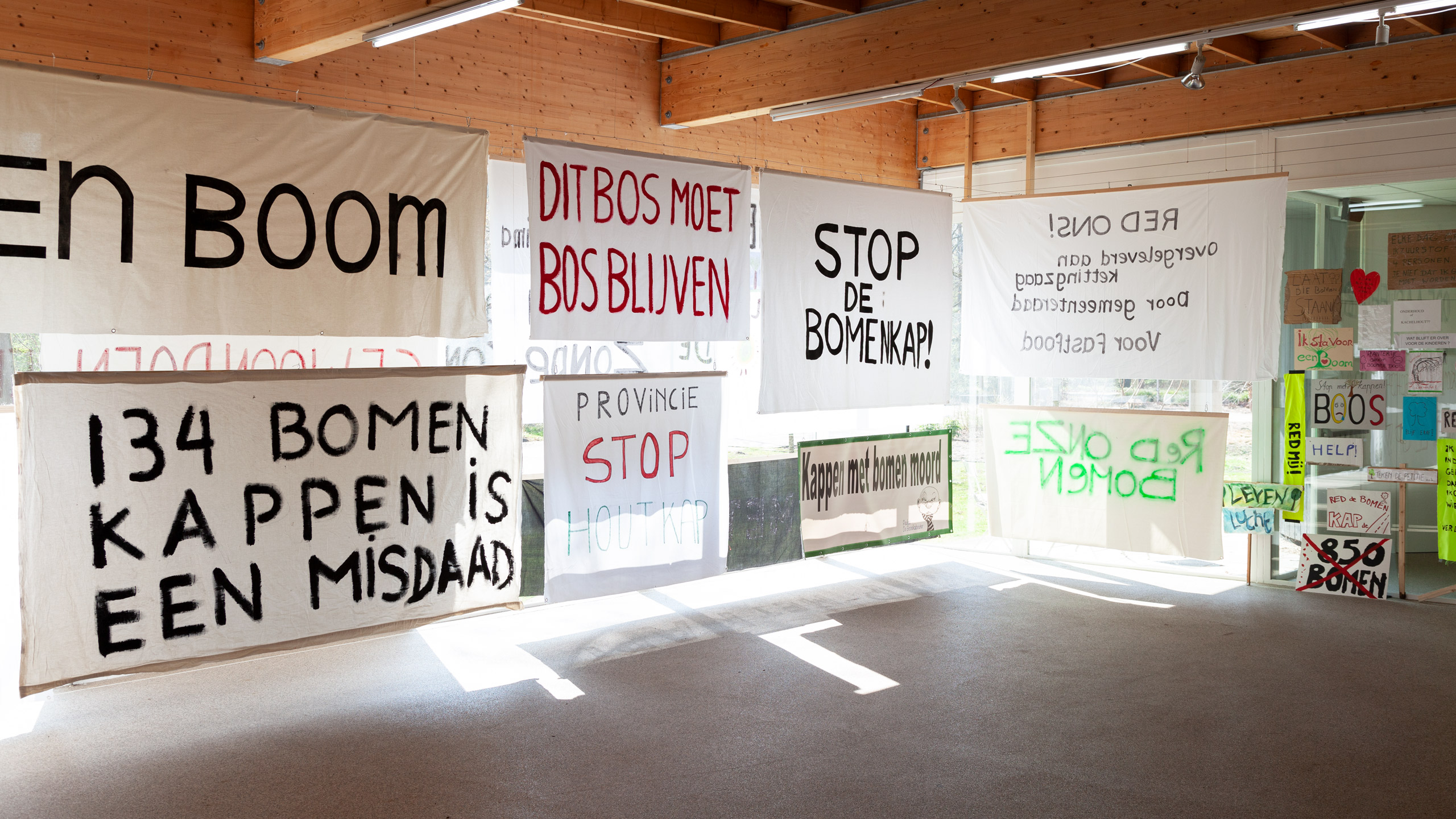 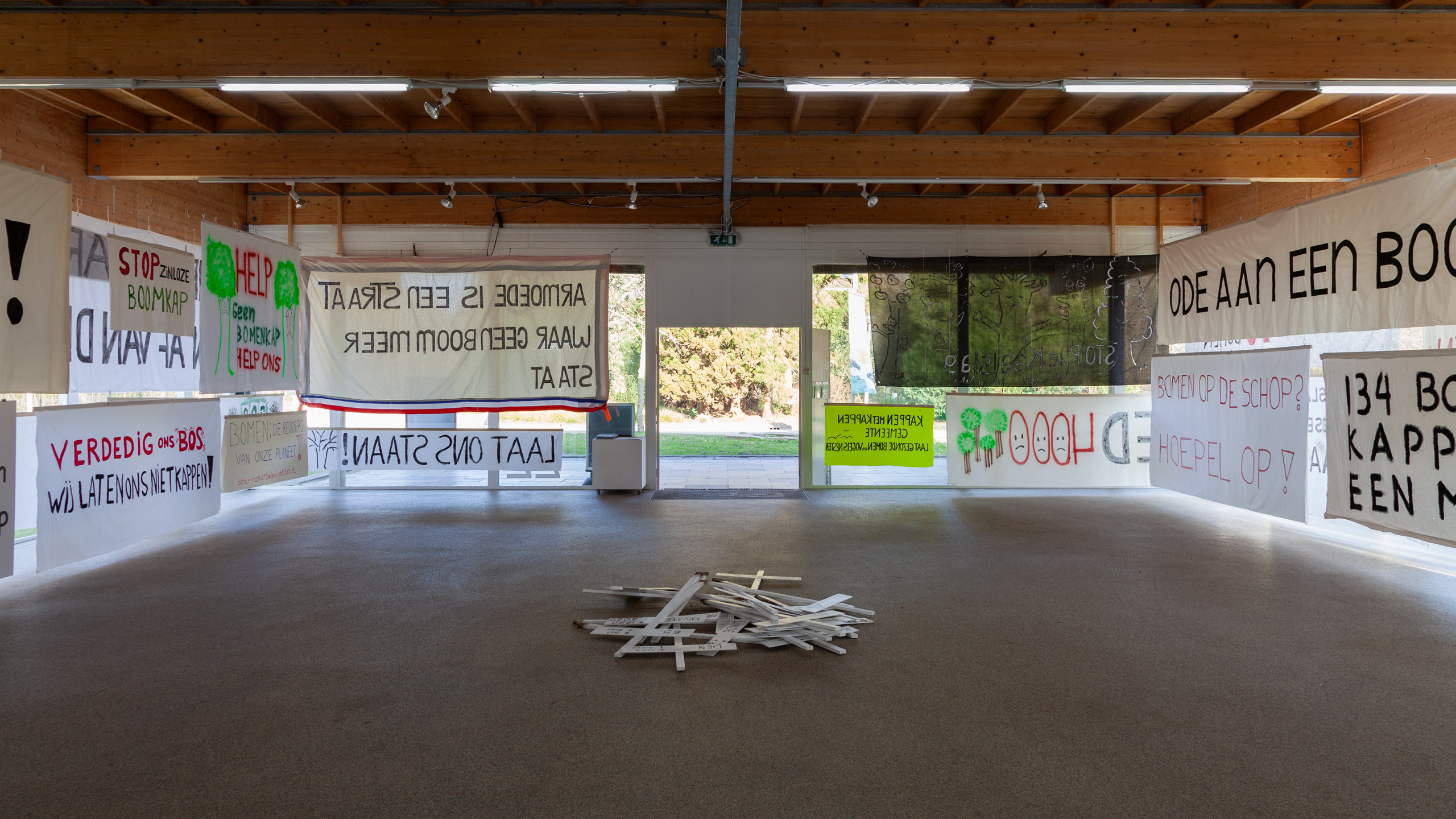 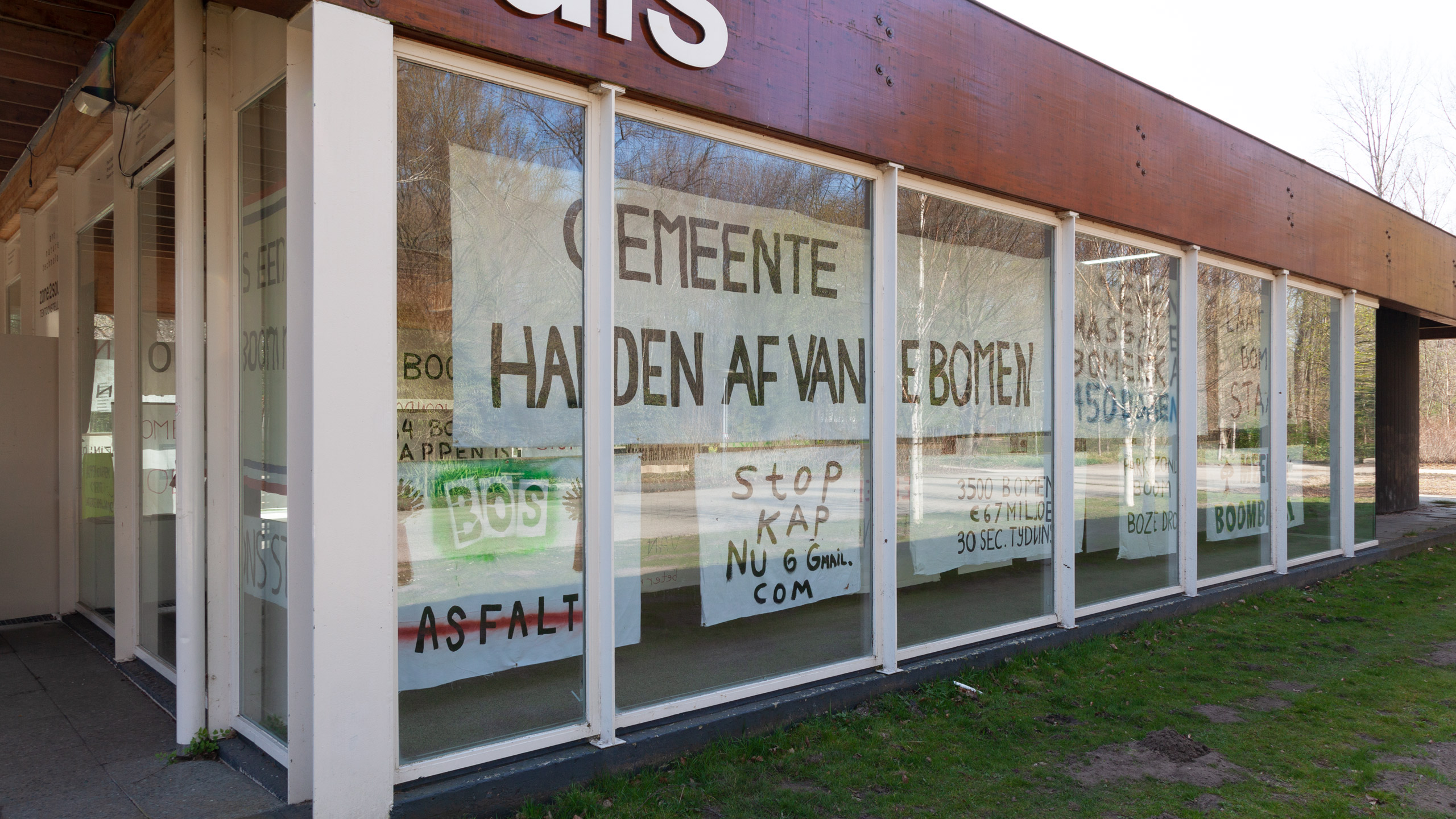 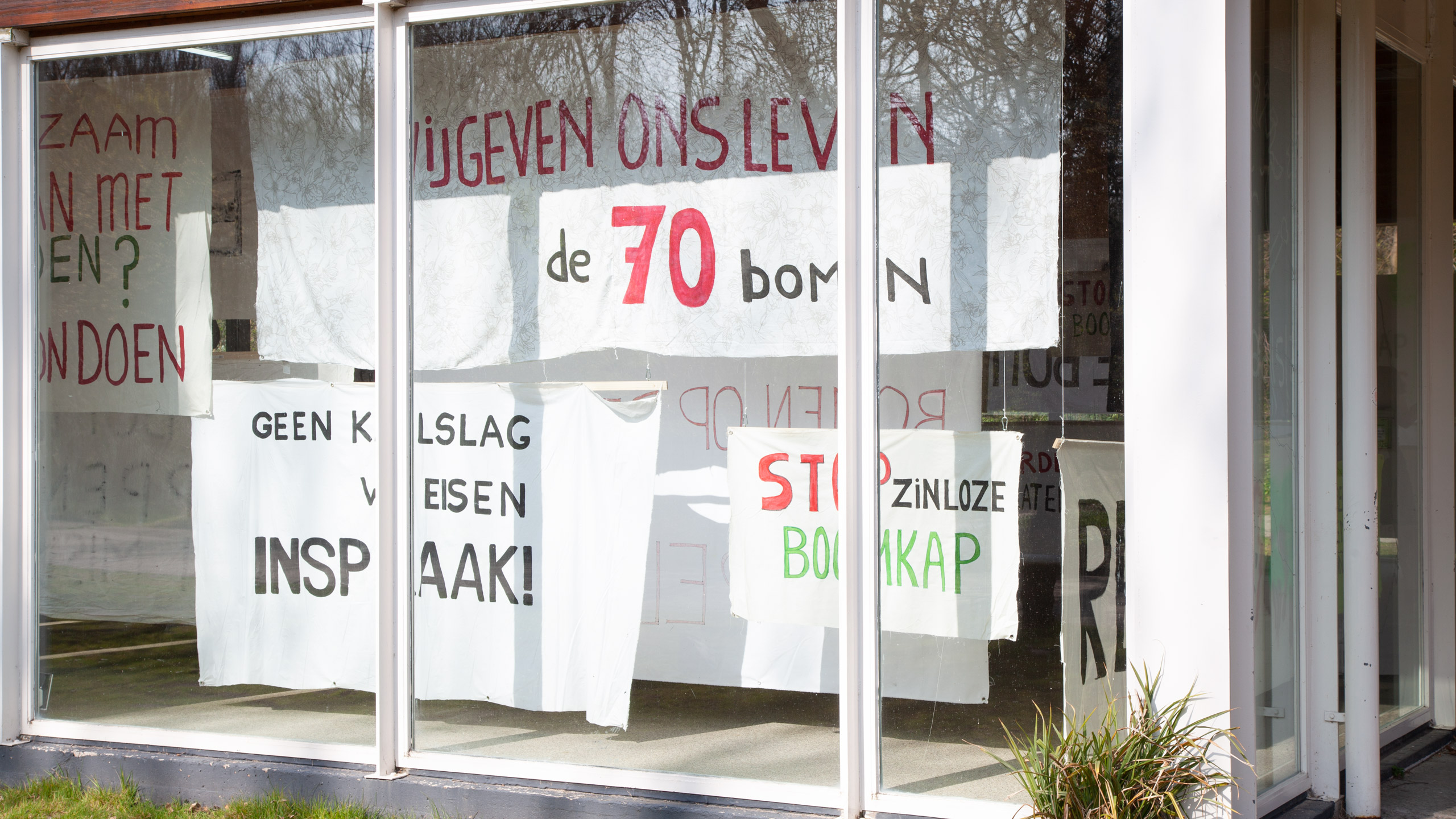 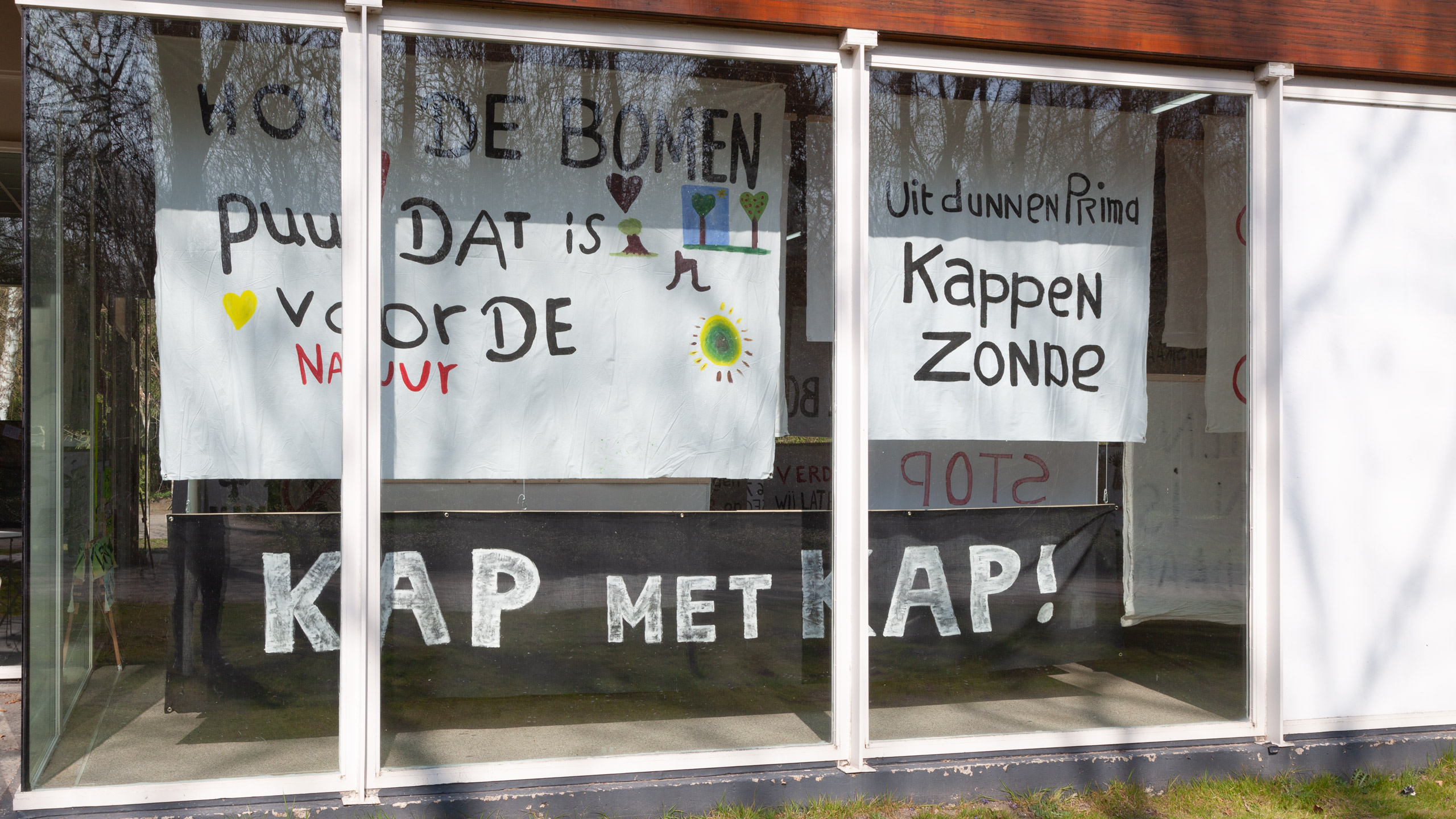 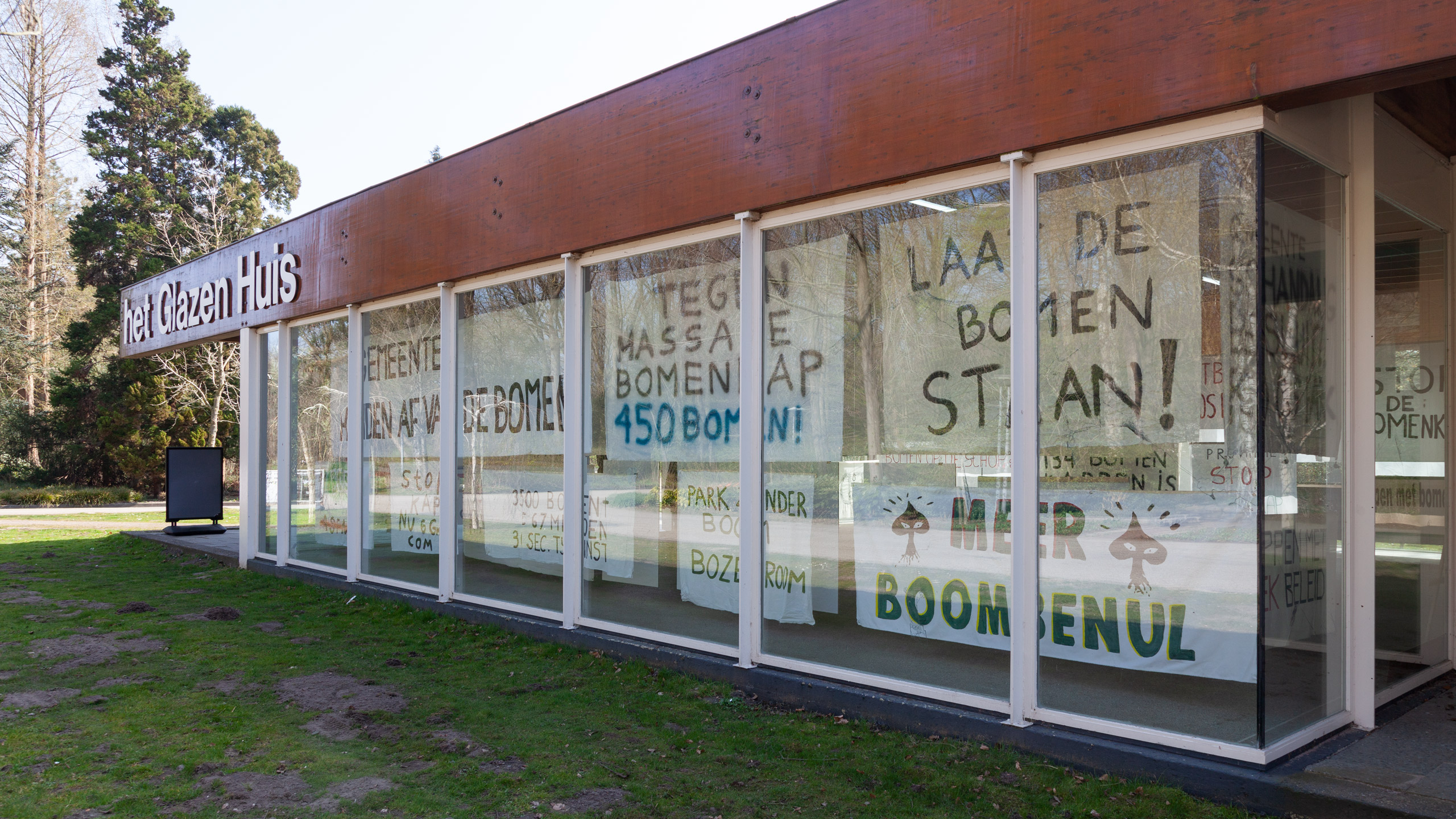 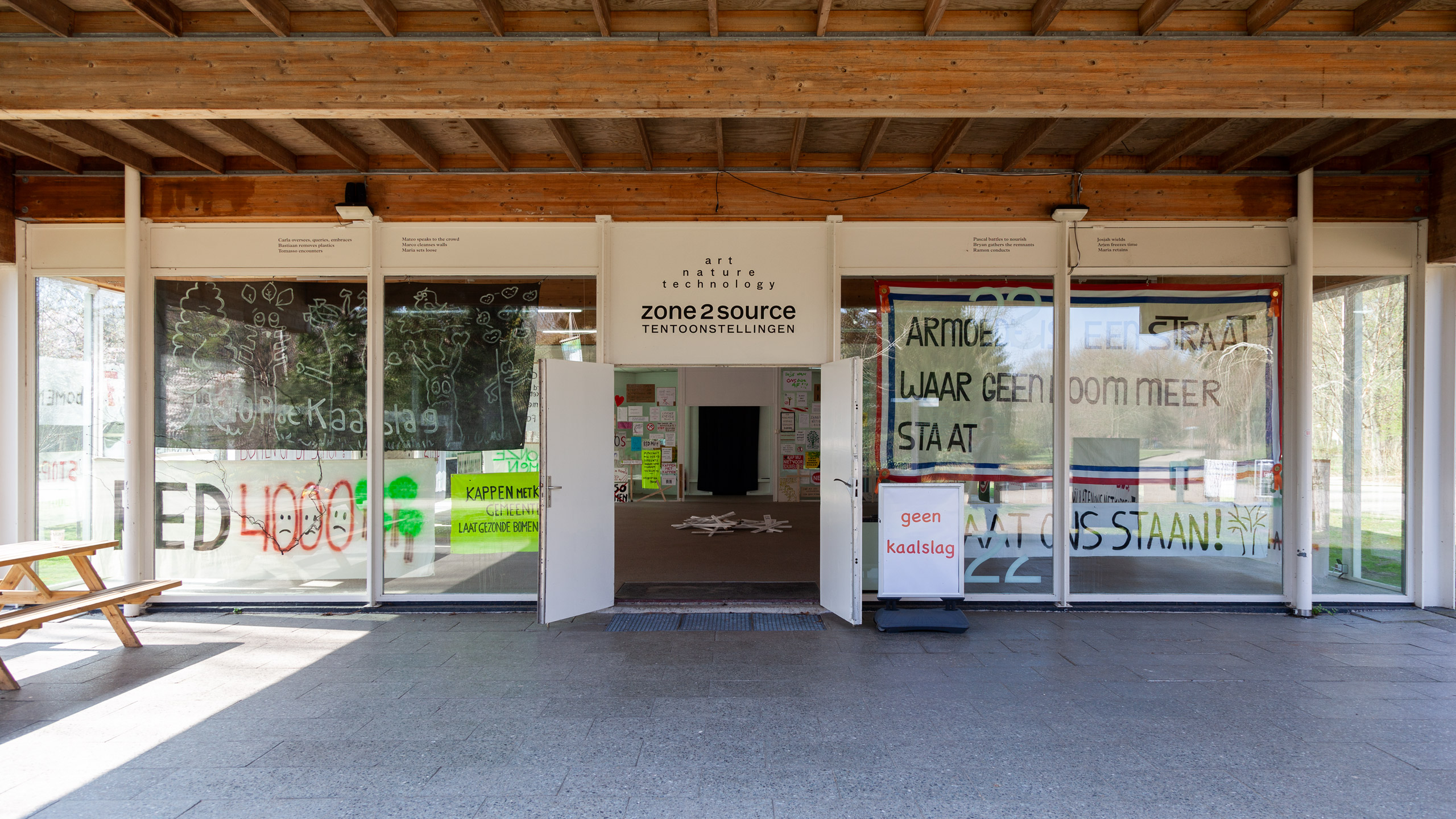 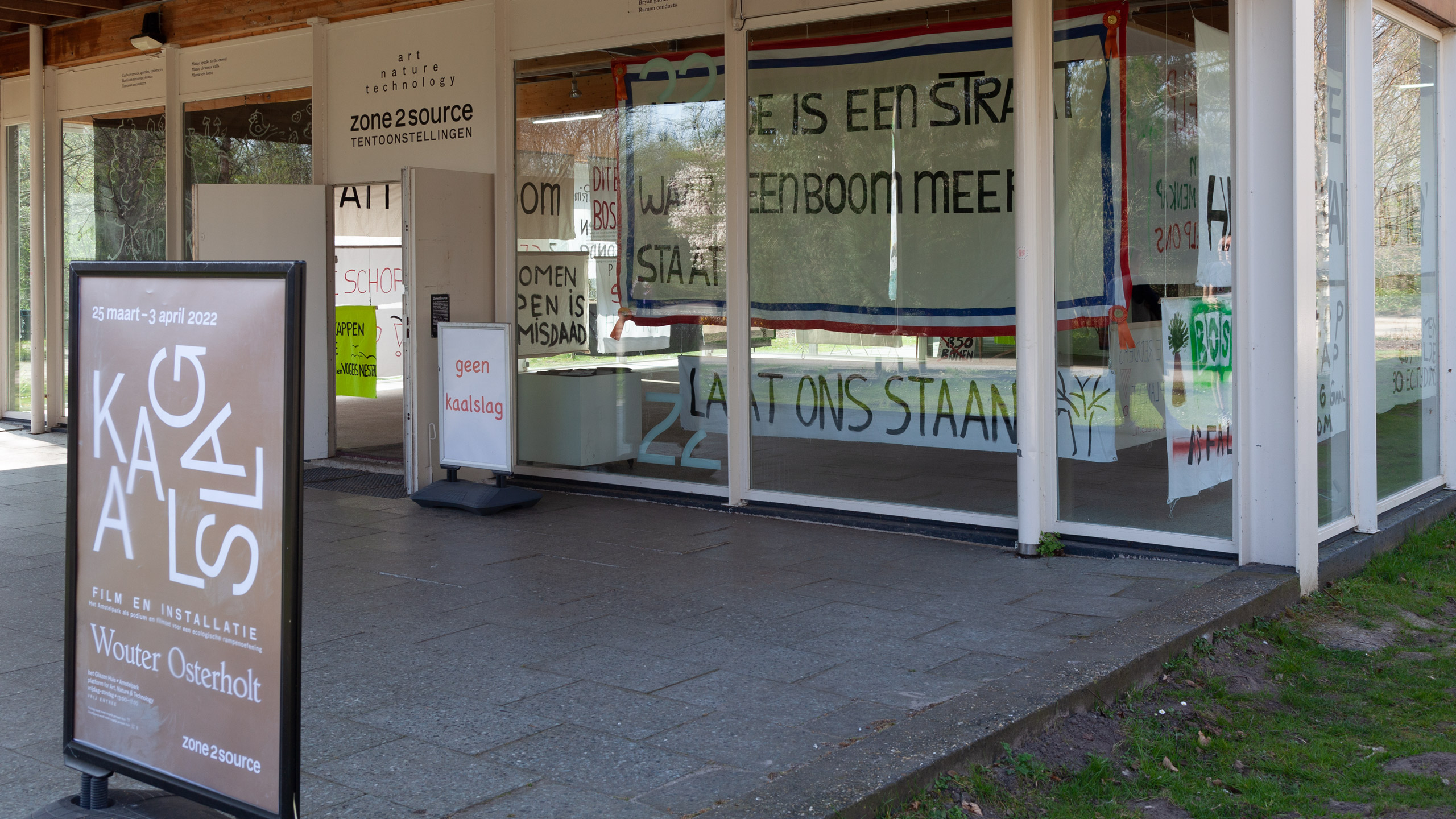 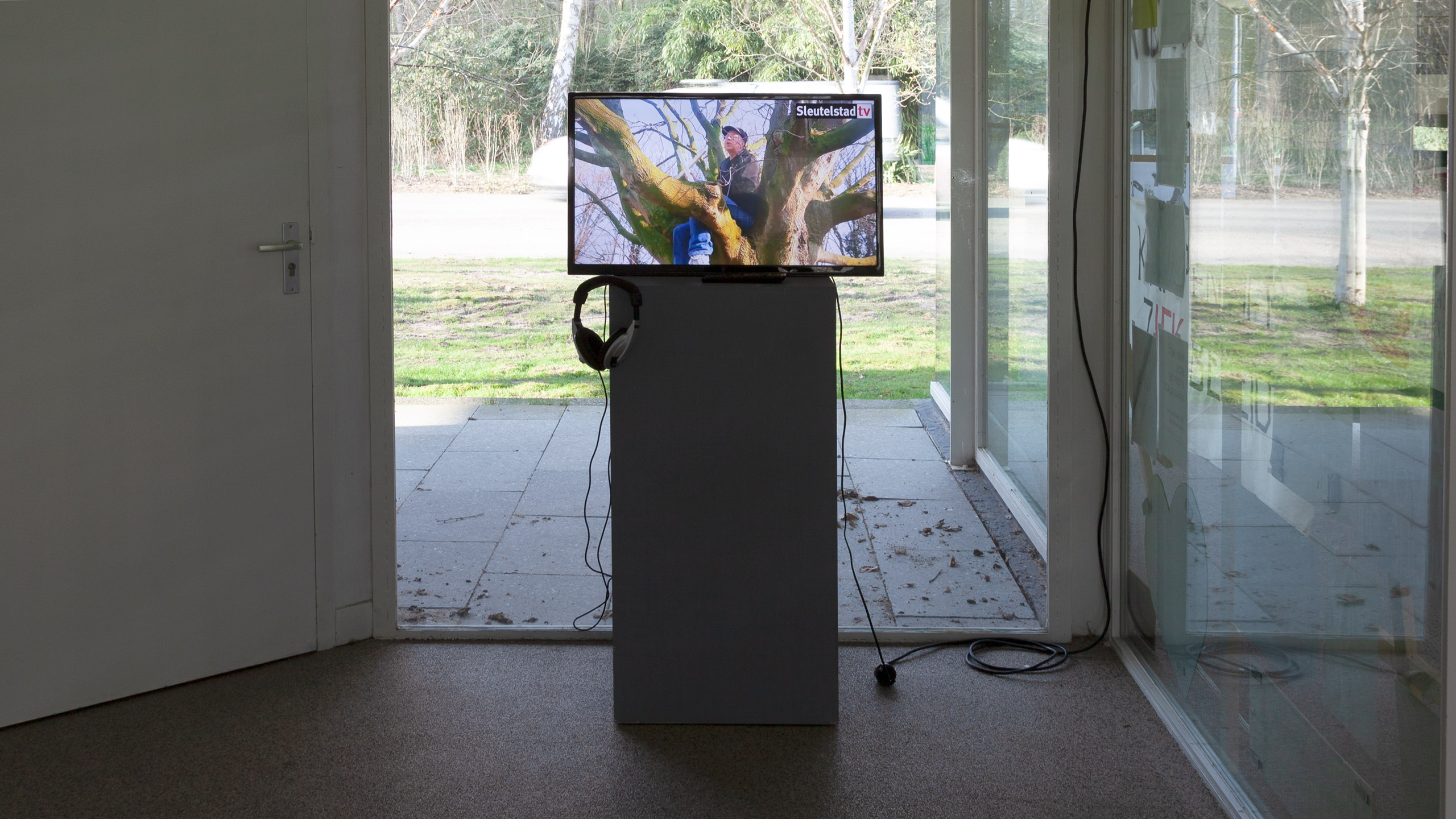 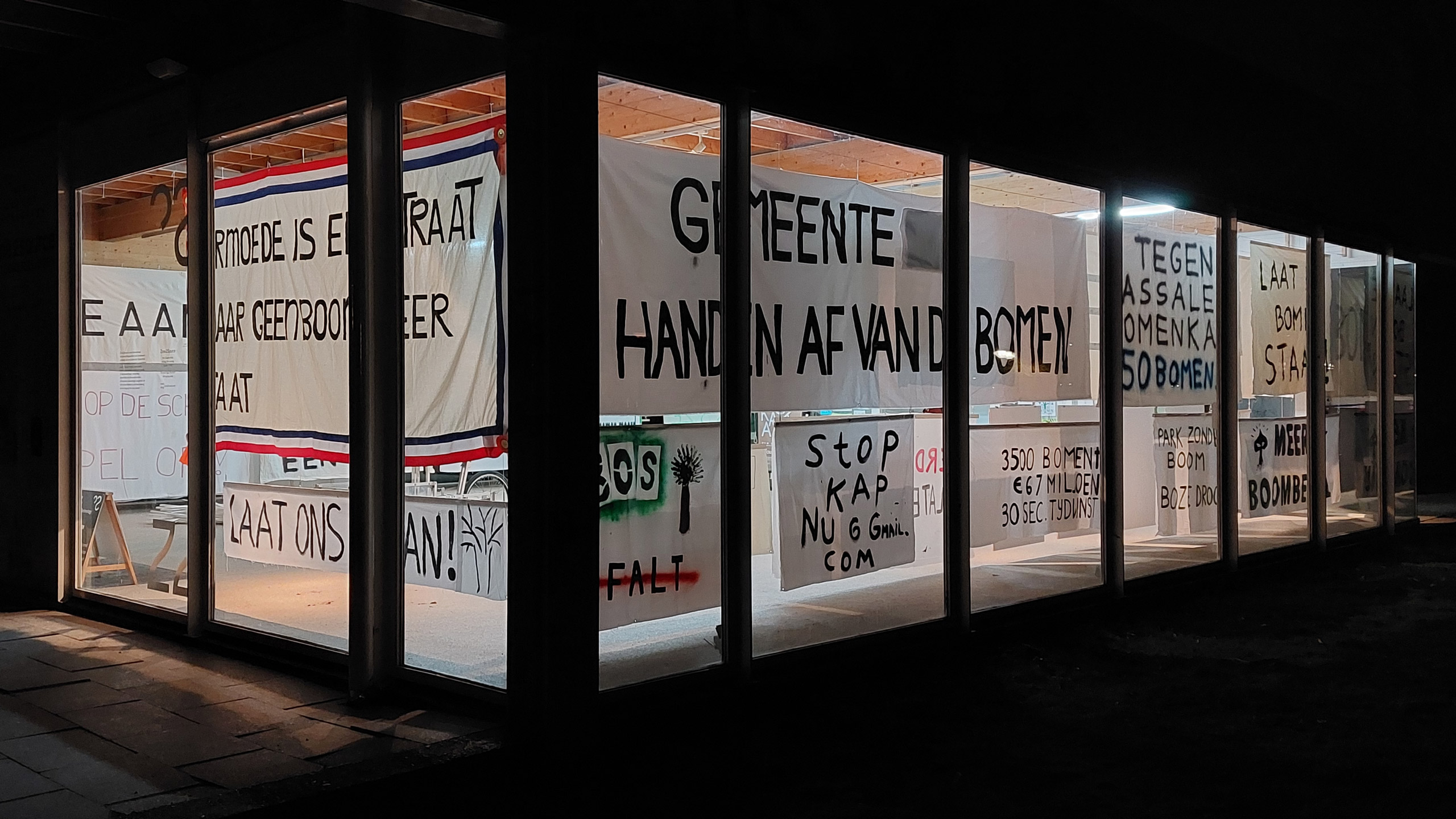 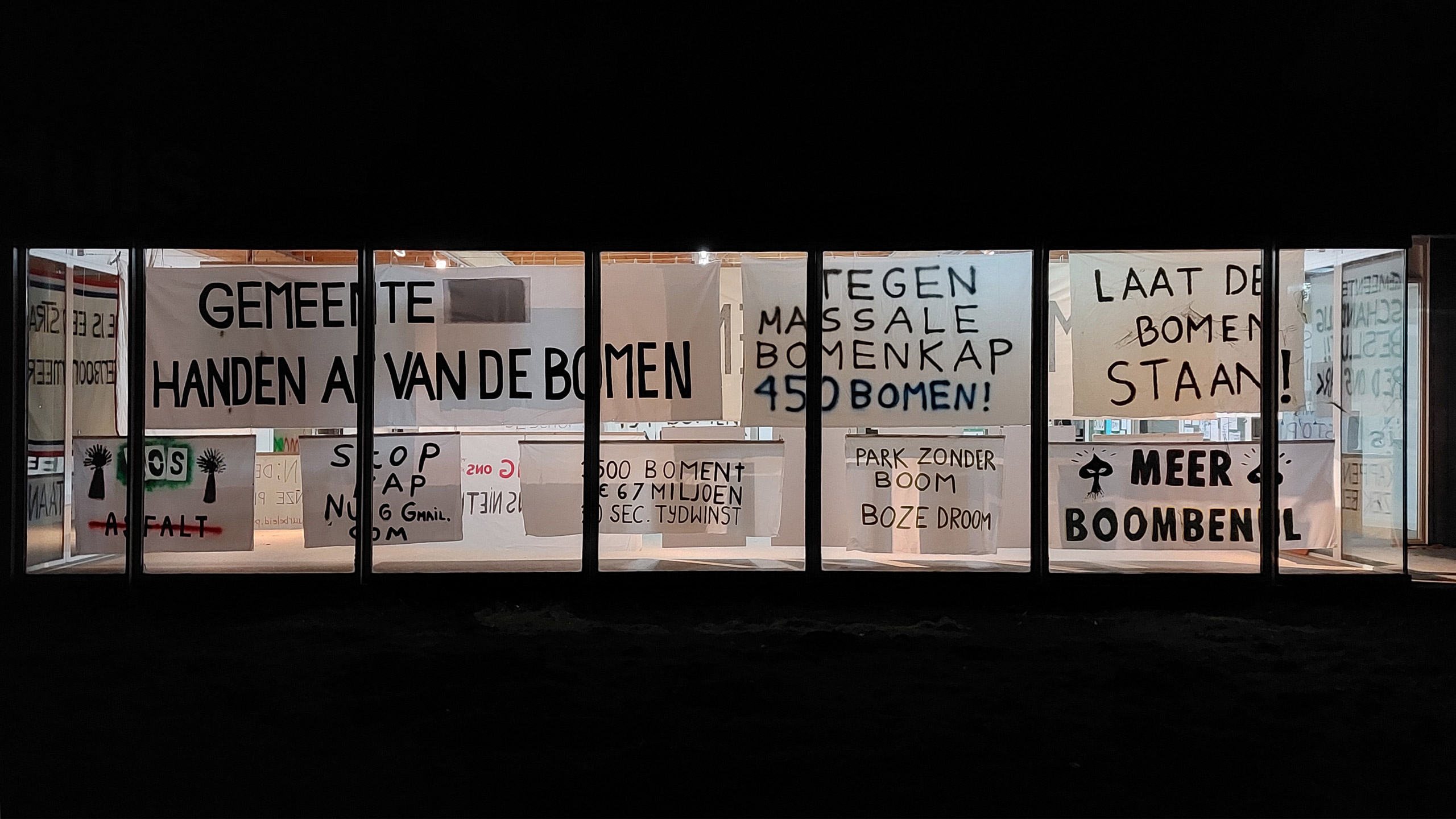 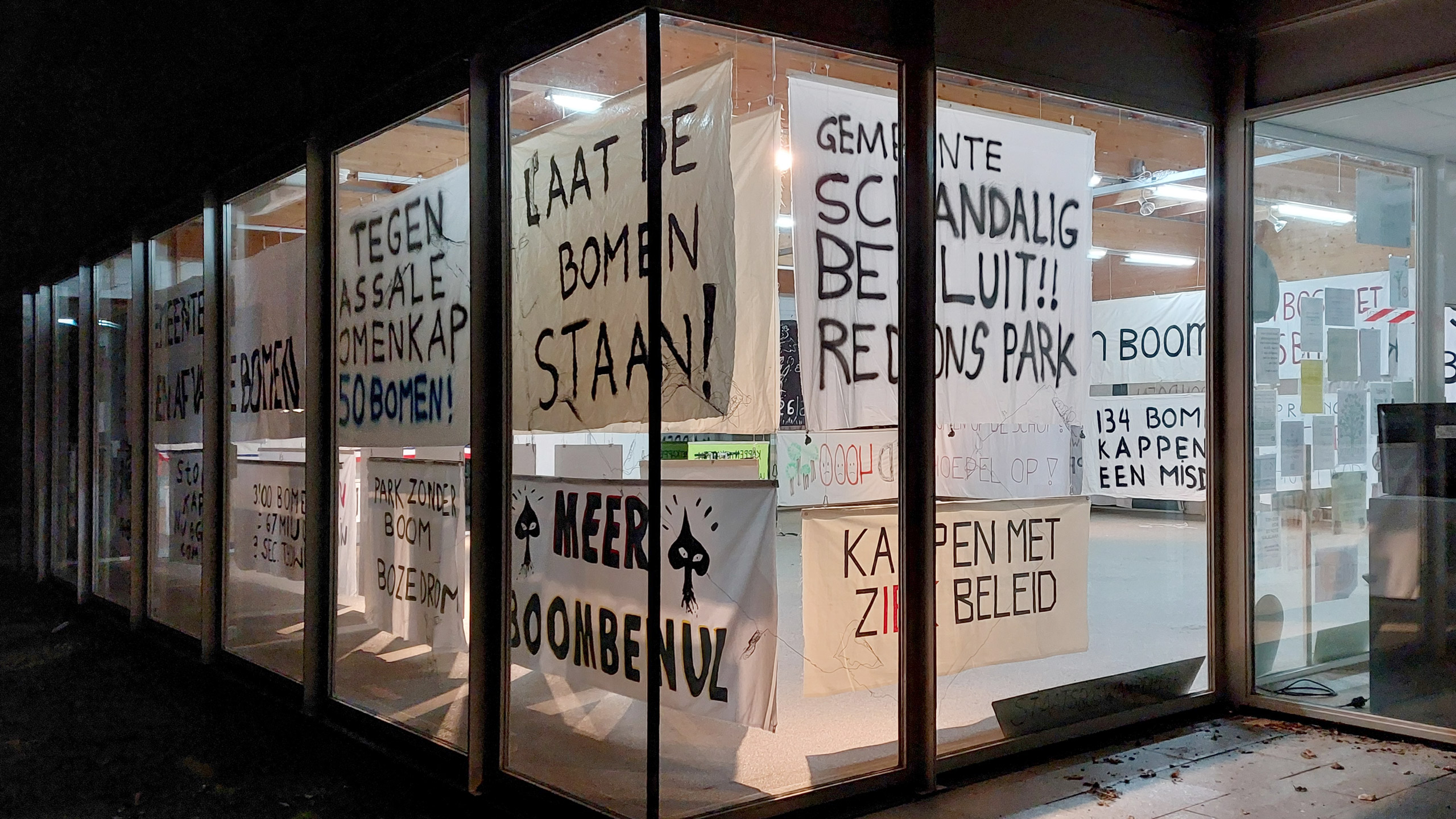 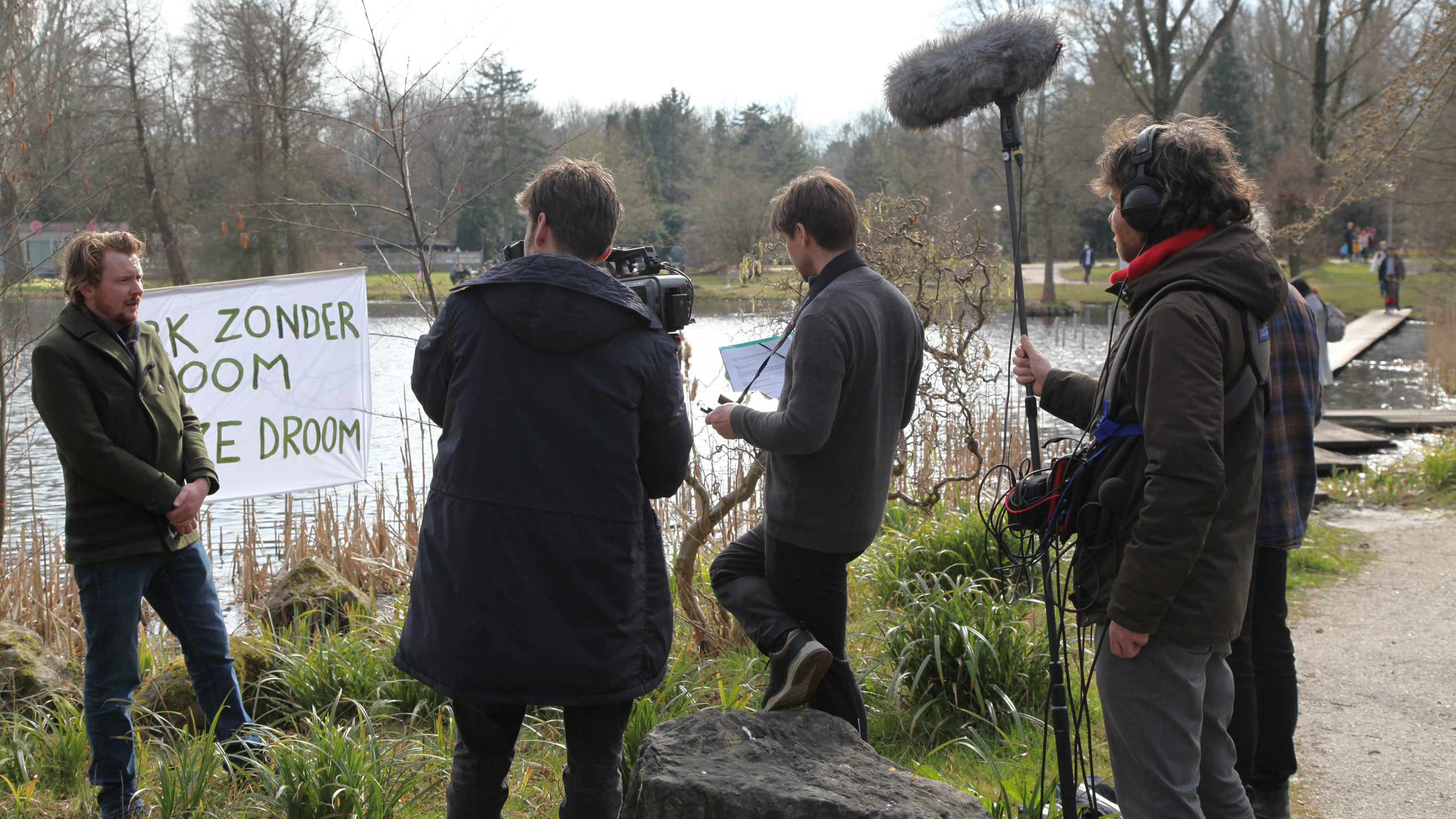 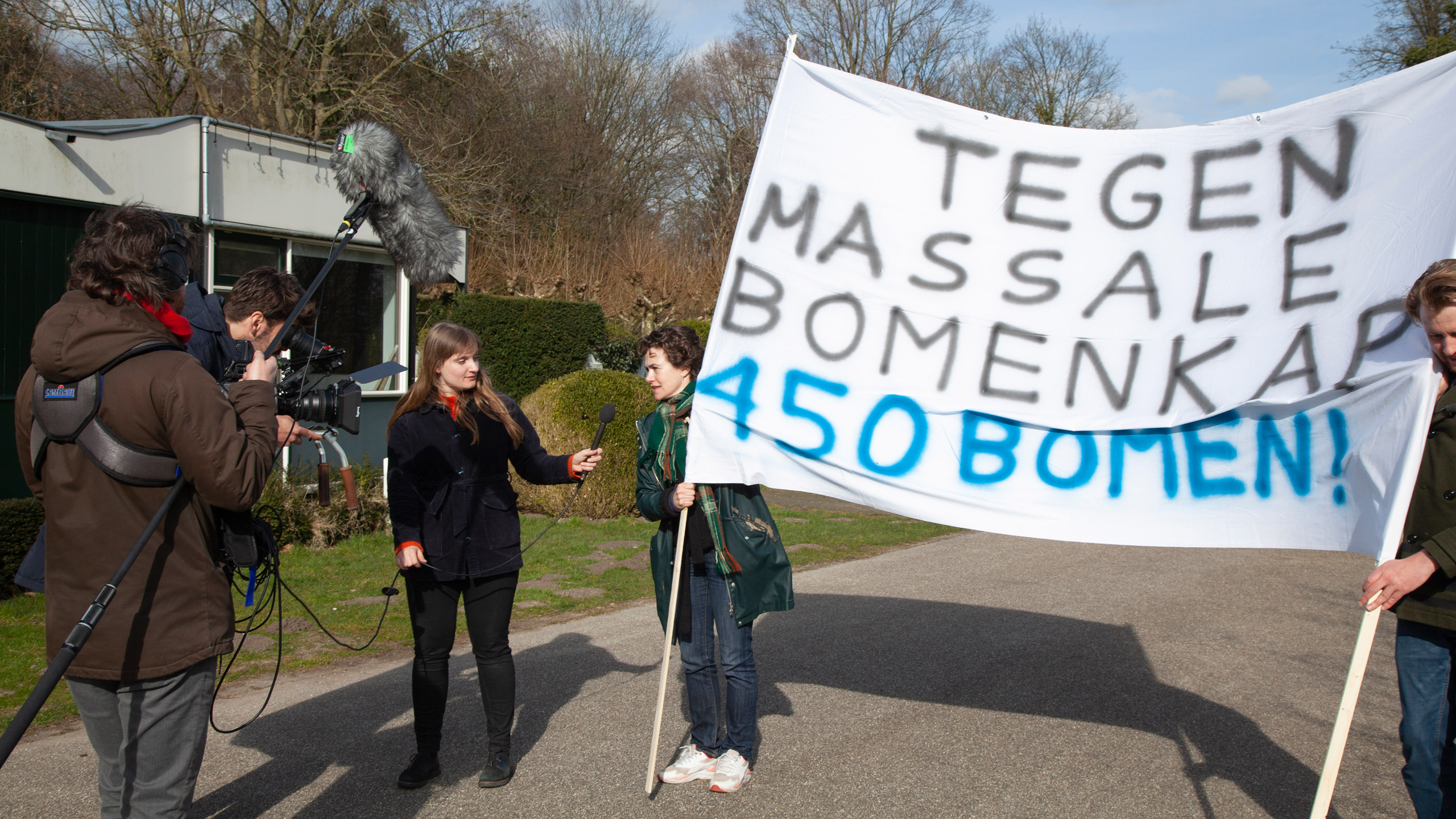 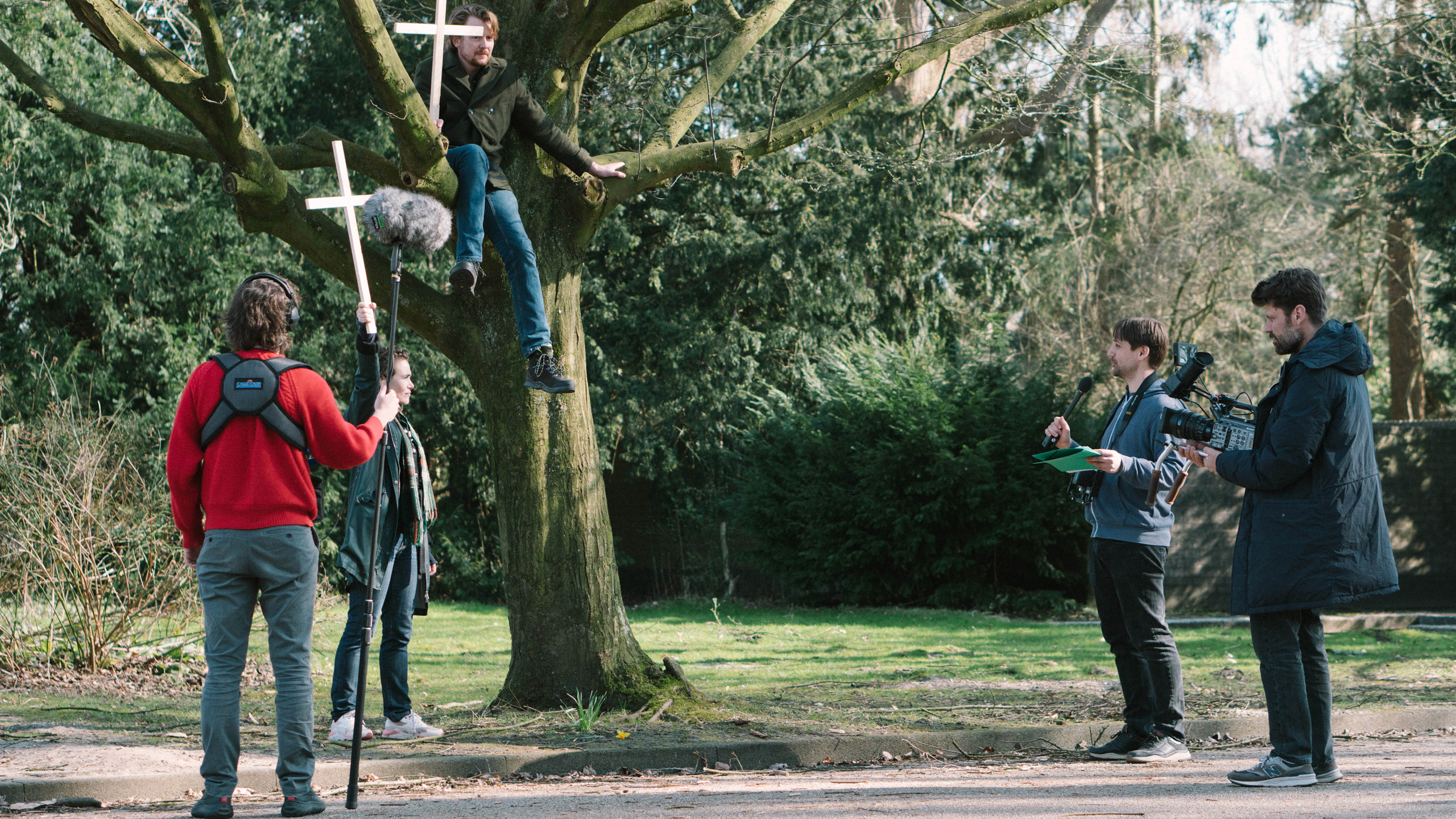 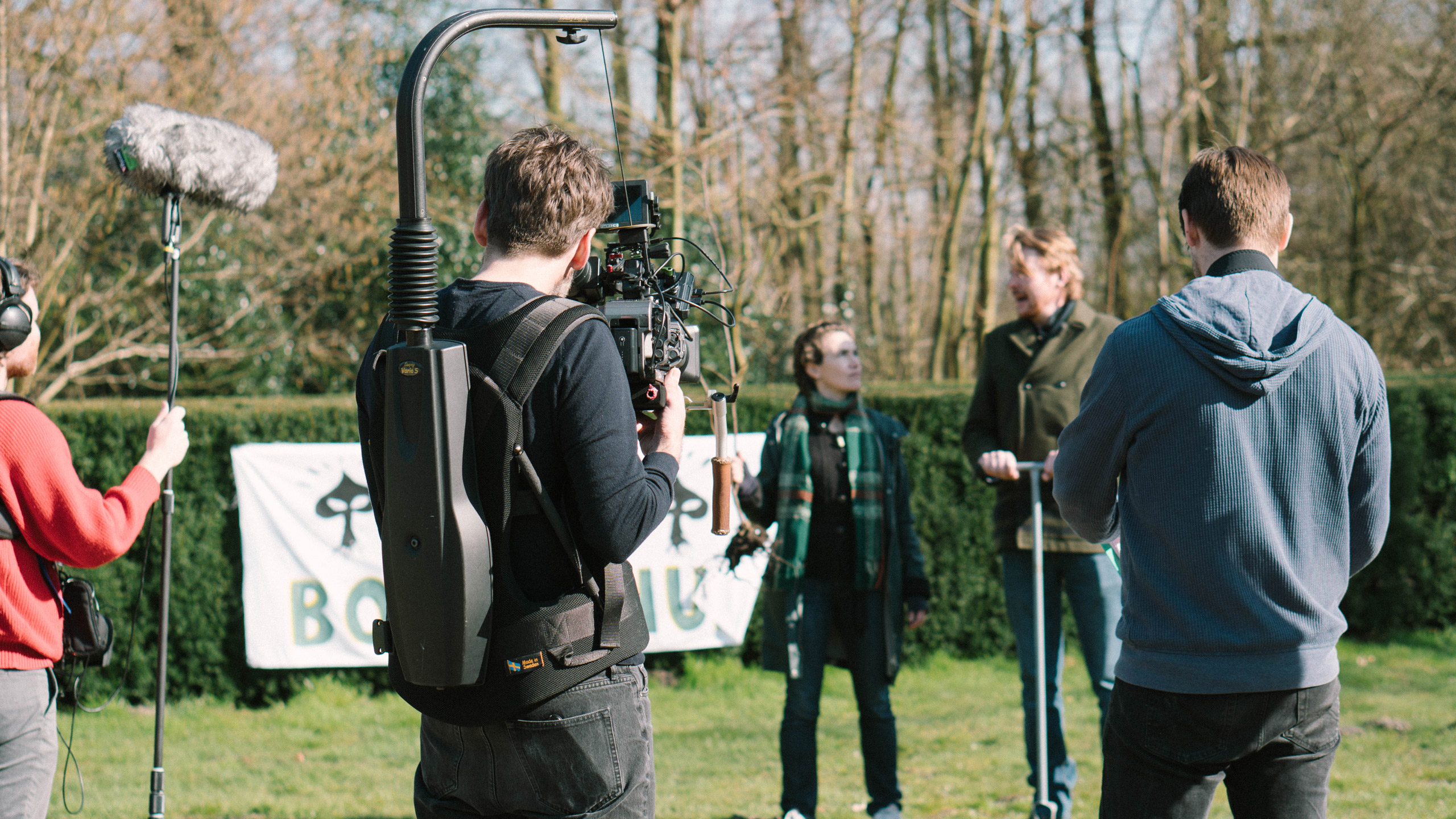 (Dutch for ‘Clear Cut’) is produced in the context of Exploded view, an interdisciplinary research project organised by CLUE+/VU and Zone2Source in Amsterdam. The aim was to investigate the changing claims and perspectives on the heritage of the Amstelpark. In 2019, hundreds of trees in the park were cleared during works on the nearby A10 motorway. Despite the relatively large scale cutting, there was no protest. The absence of any public outcry over the felling of the trees stood in stark contrast to the growing tendency of resistance against the cutting of trees during the last decade. The project consists of a serie of reenactments of historical protests as found in different media archives. The staged performances were meant as an ecological disaster practice in order to test people’s engagement with the topic. The results of the project were exhibited at Zone2Source (2020 and 2022).

The Amstelpark lays hidden behind a large fence in order to ward off threats from the outside. It’s a place where cycling is prohibited and where the strict supervision of park rangers ensures that nothing can take place off the beaten track. Park management is taken so seriously that artists who want to work in the monumental exhibition park are forbidden to fix objects in the ground or in the trees. The entire park is treated as if it were a museum object.

The absence of any public outcry over the felling of the trees made clear that the park lacks a group of involved stakeholders. This lack of support is even more striking knowing that tree felling became a much debated topic in Dutch municipal and provincial politics over the last years. The threatened tree has become a political subject, showing the anxieties and concerns of people in a rapidly changing world, where climate change is often a rather abstract and invisible phenomenon, while the cutting of a tree, on the other hand, forms a tangible link with the endangered natural world.

To break through the silence that surrounded the clearing of the trees in 2019, the project proposes to further test the resilience of the park by allowing a fictitious threat in the form of an ecological disaster exercise with the assumption that this can benefit the sustainability of the park. The week-long exercise is based on former tree protests that took place in the Netherlands during the last decades. The research into this phenomenon has led to a compilation video with more than 200 examples of tree protests, found in various media archives; from small-scale improvised actions to strategically planned manifestations of political parties. During the exhibition this 90 minutes video work, together with replicas of the original protest signs, served as source material for staged situations that took place at different locations throughout the park.

The protest actions were reenacted with two actors on different locations throughout the park. Simultaneously these moments formed the opportunity to interact with passersby. By placing the historical events in the present, bystanders were challenged to revaluate the status of the Amstelpark. The results of the interventions were documented and shown as a film during the final exhibition.