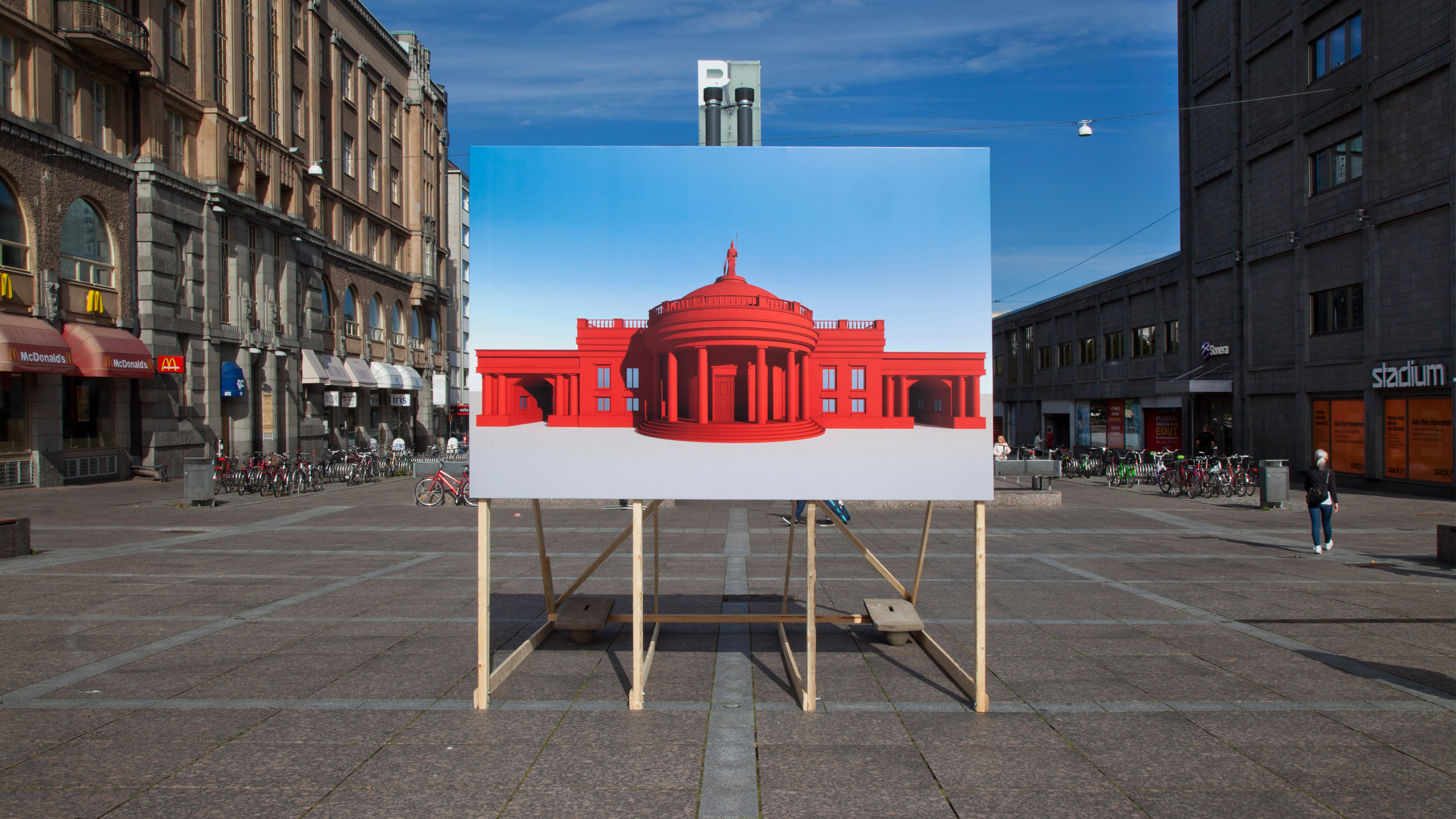 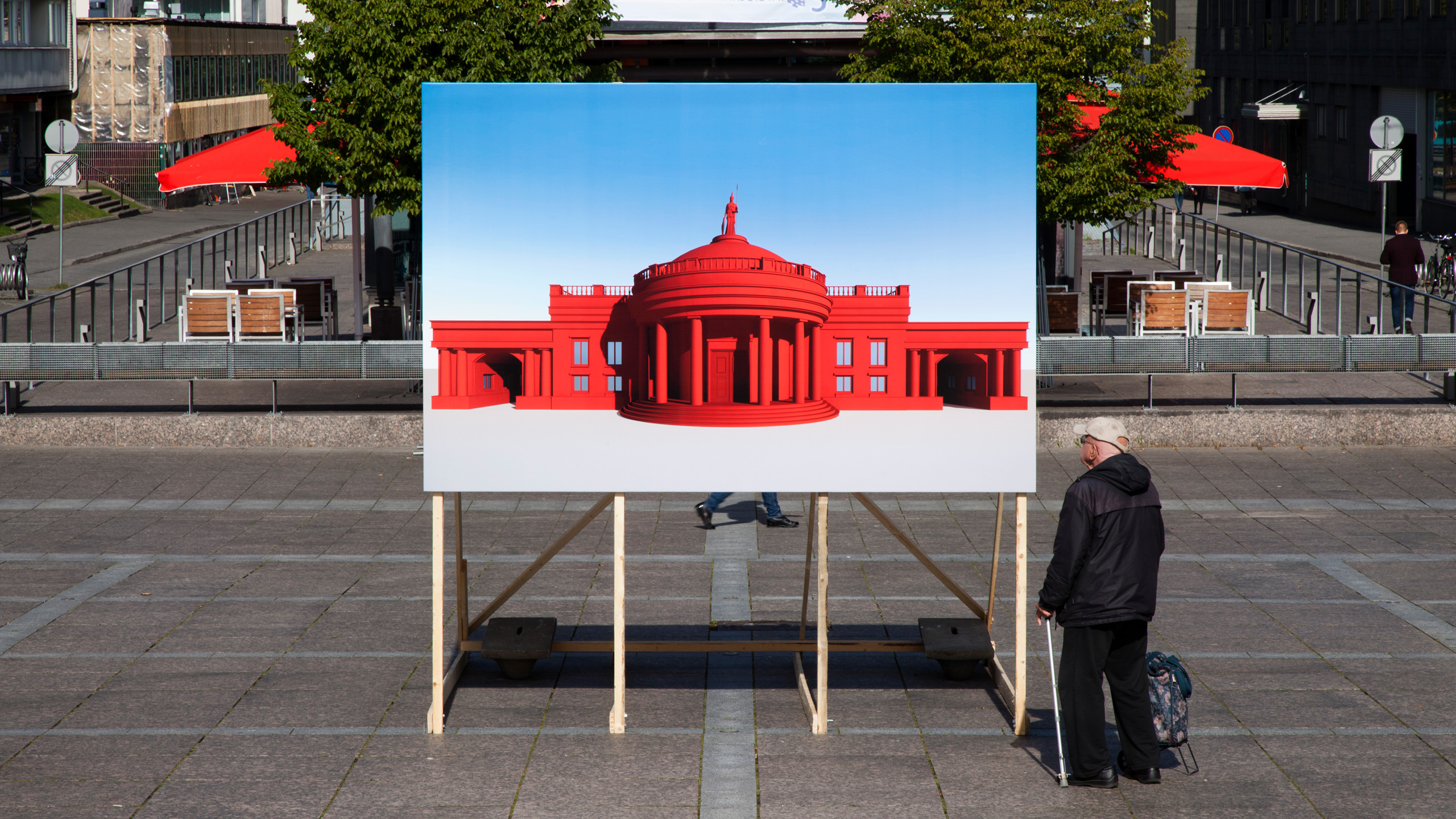 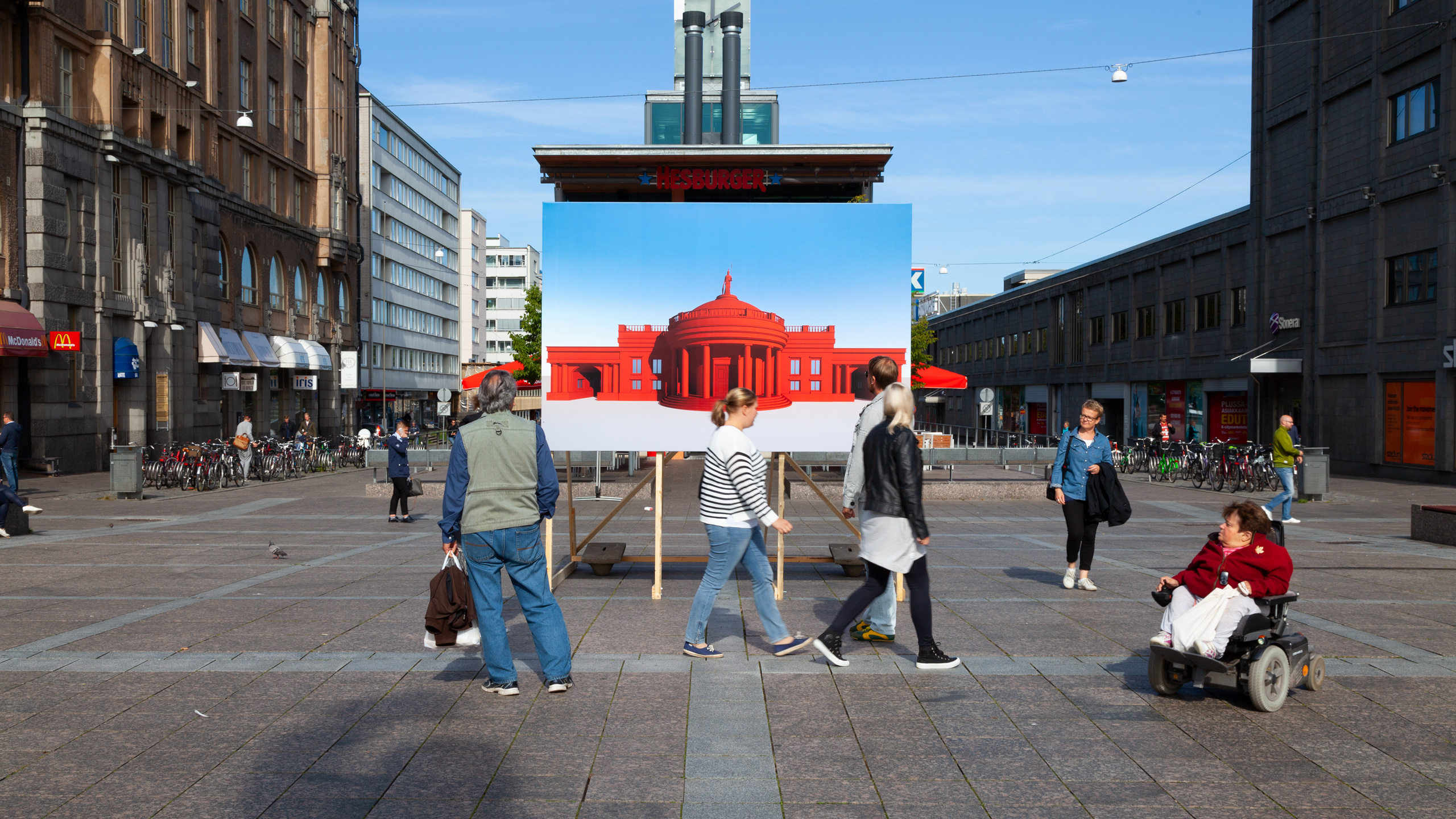 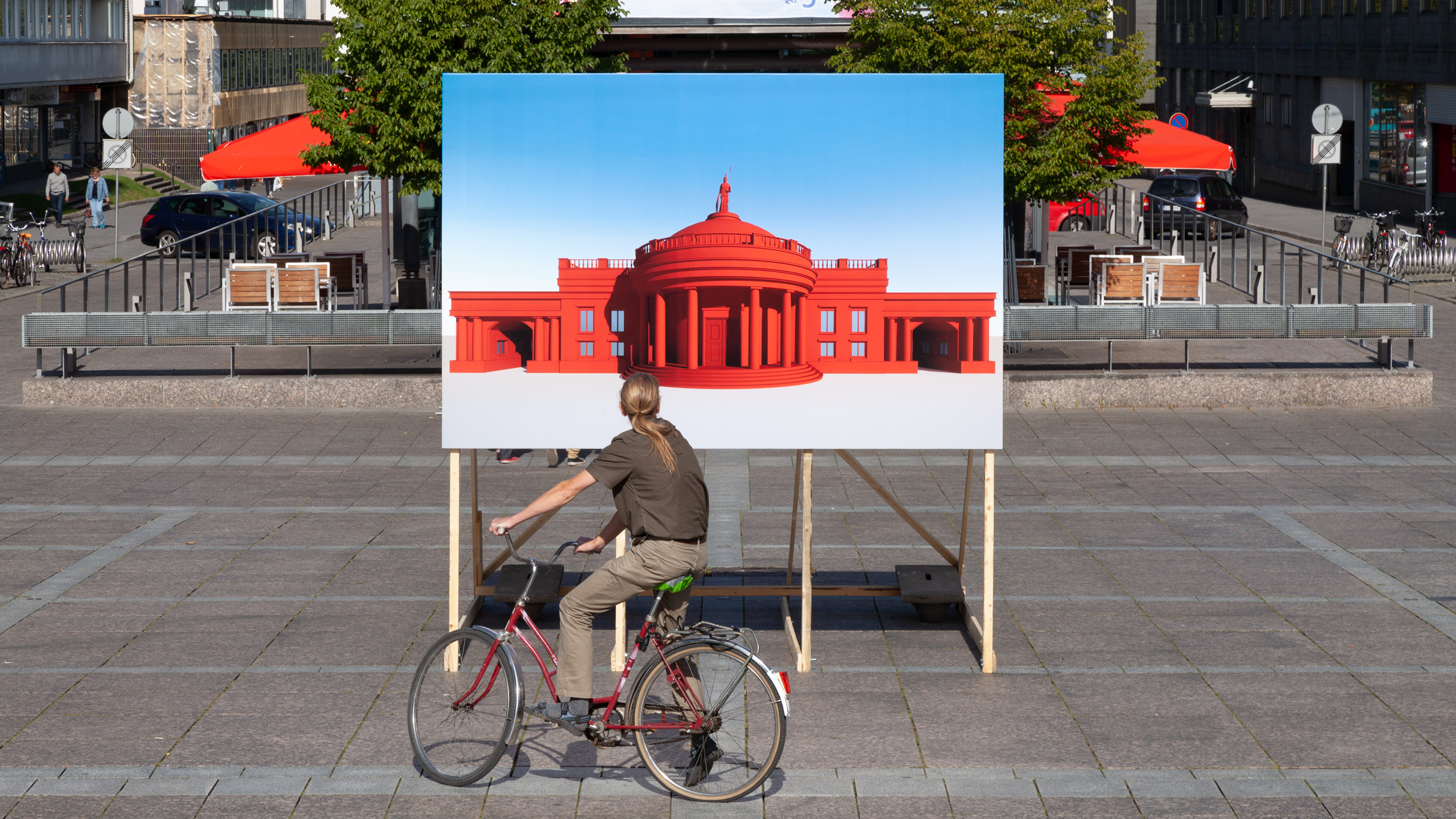 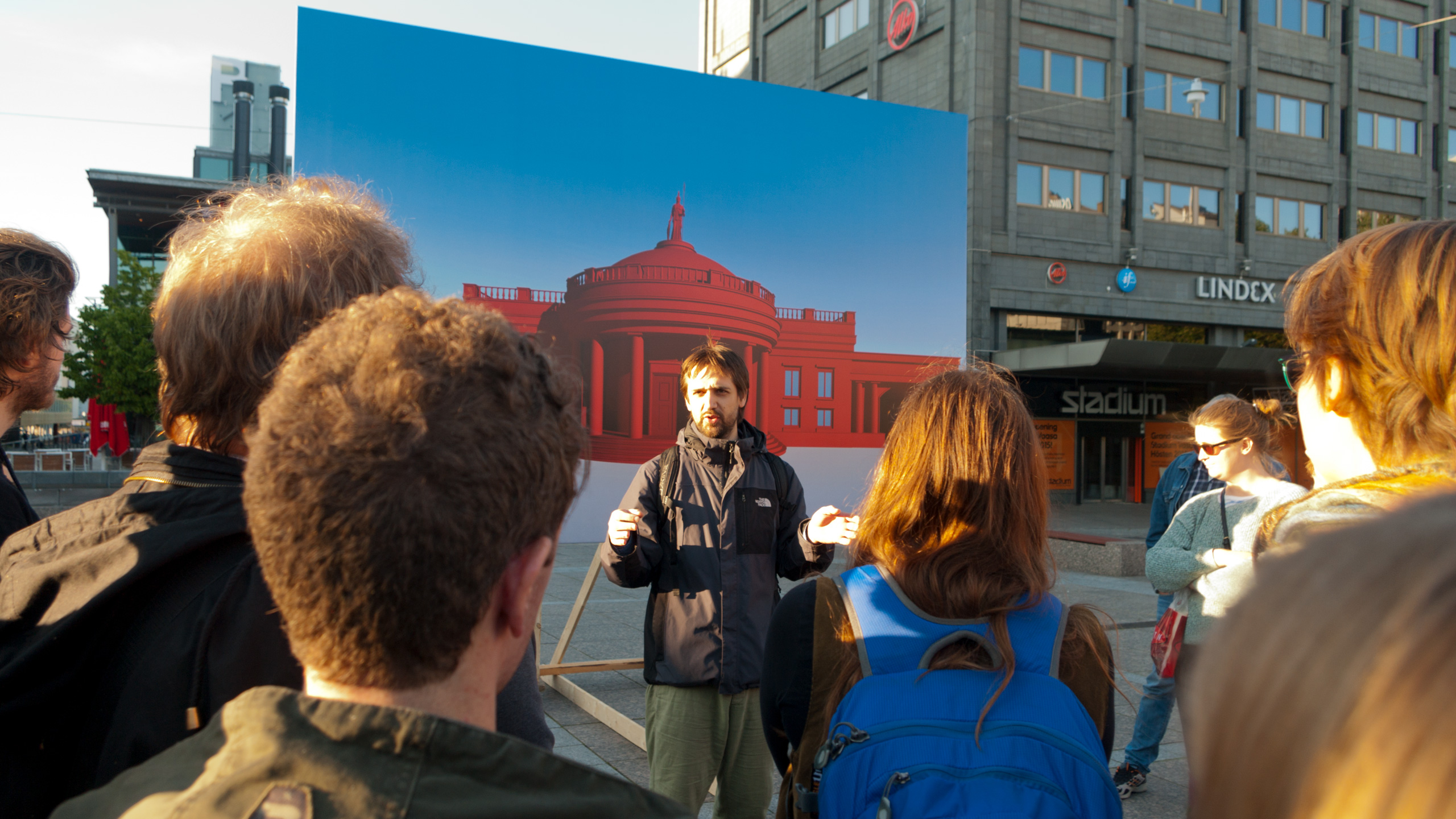 (Finnish for ‘Freedom Temple’) was produced in the context of the Vaasa 20X0 project organized by artist initiative Platform in Vaasa. The question was how to set up an artistic campaign that would engage local residents in a debate on the future of the city. As a start to the project I looked at 2018, the year of the 100th anniversary of the end of the civil war. The idea was to design a new freedom memorial in Vaasa by appropriating an unrealized proposal from 1918. We organized a public consultation session (2014) and asked people to respond to a new rendering of the Freedom Temple, which was based on a recently discovered drawing in the archives of the local history museum. One of the many proposals was selected and visualized on the market square in 2015.

Between 1809 and 1917 Finland existed as an autonomous part of the Russian Empire. It was only after World War I and the collapse of the Russian Empire during the Russian Revolution when Finland claimed complete sovereignty through a declaration of independence. Although the majority of the Finns supported sovereignty, the declaration occurred in the context of an interregnum and the chaotic situation led to a civil war between the Social Democrats (Reds) and the more right-wing conservatives (Whites). The Russian Soviet Republic supported the socialists, whereas the Whites received military assistance from the German Empire. The Whites won the war.

After the civil war, the commander in chief of the White army, Carl Gustaf Mannerheim announced a large-scale commemoration project of the so-called ‘freedom war’. A committee was formed with the task to build a memorial in the city of Vaasa. (During the civil war, Vaasa was the capital of Finland and it became known as “The White City”). The committee stated that the memorial should not be built in the form of a monument or statue. Alternatively, they suggested building a Temple of Freedom in which sculptures of important military men, weapons and documents would be exhibited. Due to political and financial reasons the temple was never build, instead a monument was erected on the market square in 1938.

The original purpose of the temple was to glorify the heroic actions of the White army. The atrocities committed by the Whites, known as “White terror” needed to be concealed, through art, such as literature, sculptures and memorials. Just like the liberty monument on the market square in Vaasa, it was part of a propaganda campaign to influence the opinion of the general public about the civil war. The committed war crimes should have been remembered as heroic endeavors. The memorial hall in the Ostrobothnian Museum in Vaasa is an example of this glorification of the war. This one-sided and biased representation is outdated. For a long time the topic of the Finnish civil war stayed in obscurity, only in the last decades the war has been studied more thoroughly.

2018 marked the 100th anniversary of the end of the Finnish civil war. In preparation for this historical event, the project reimagined the idea of the Freedom Temple. The lay-out of the building is based on a drawing by Finnish artist Albert Gebhard (Karl Hedman collection, 1922). This sketch is the only known visual representation of the Freedom Temple. In preparation for the final proposal we organized a public consultation session on the market square in Vaasa. People were asked to give their opinions regarding the design of the temple. Out of all the ideas, one proposal was selected and visualized on a billboard in 2015. The red temple is a symbolic image that merges the two oppositional political entities and refers to the often heard saying that the Finnish constitution was written in blood.