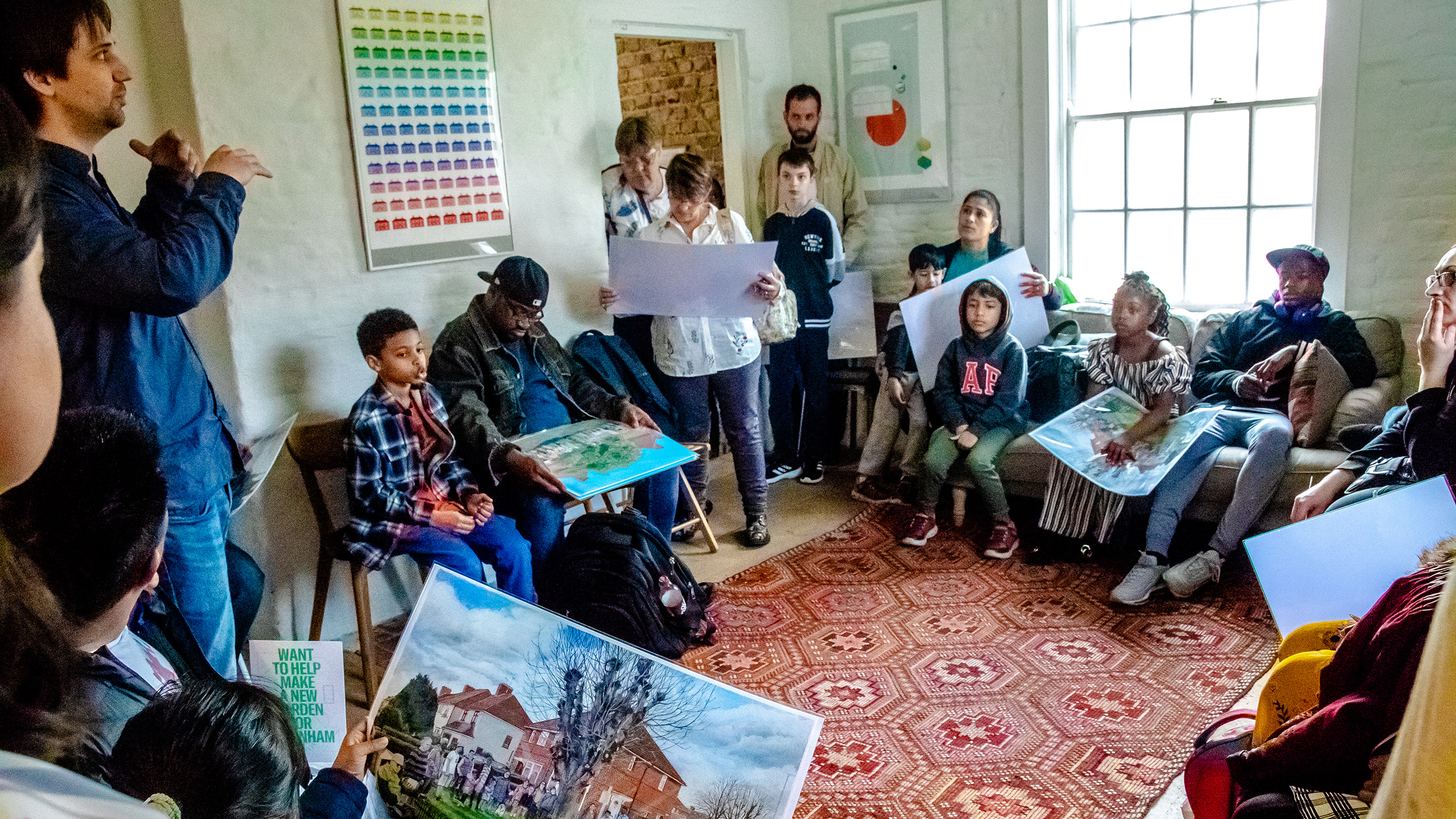 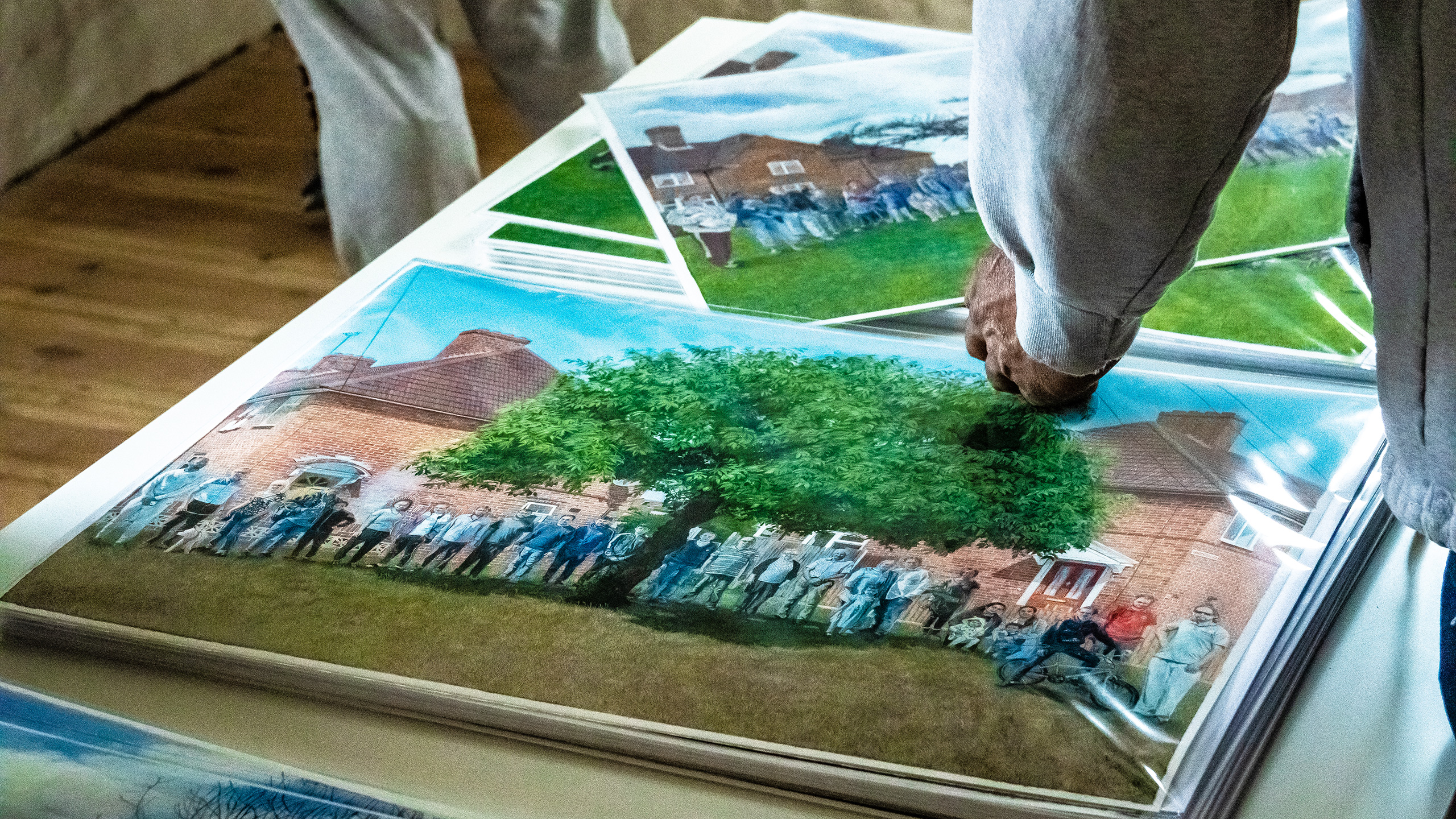 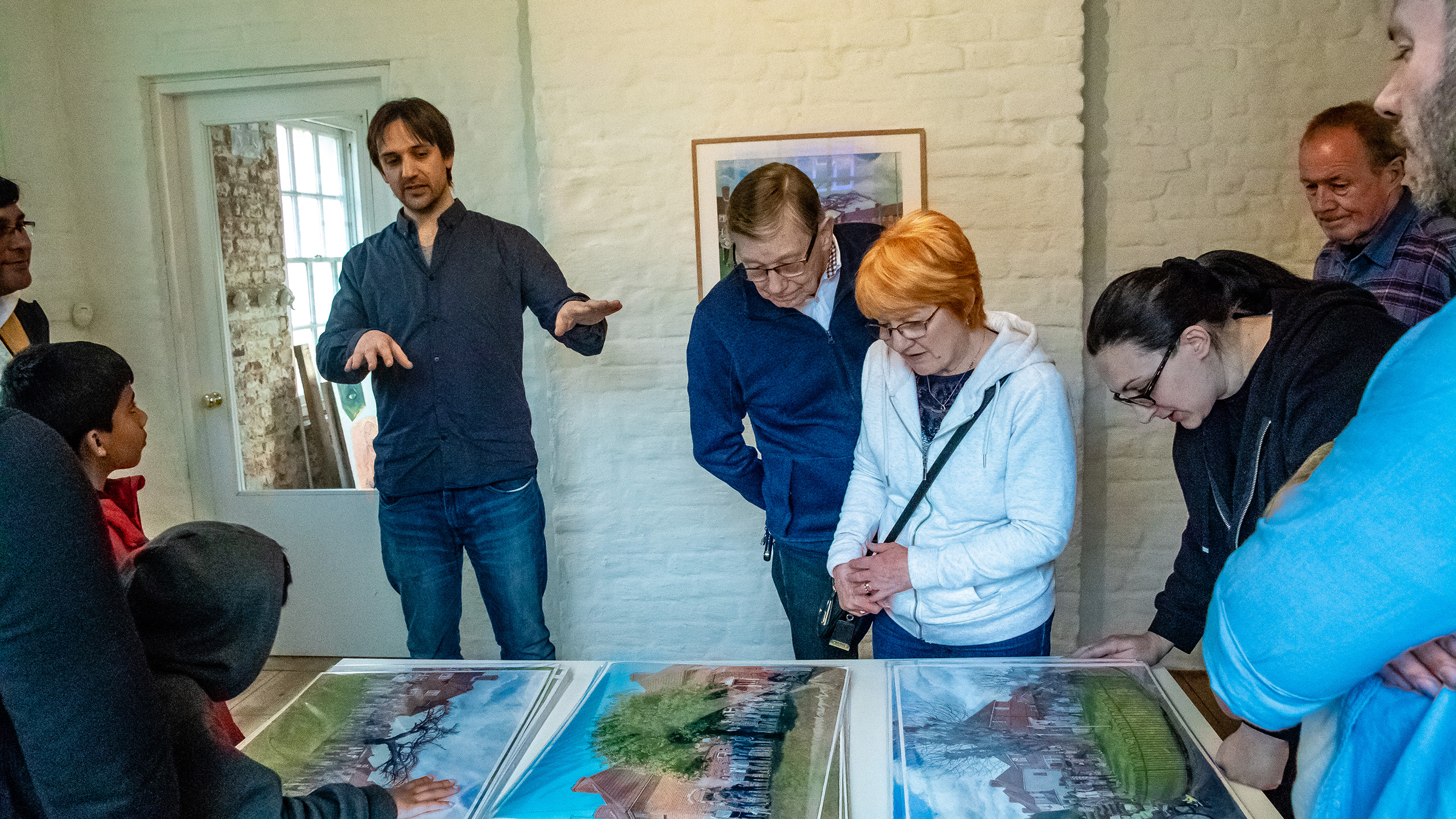 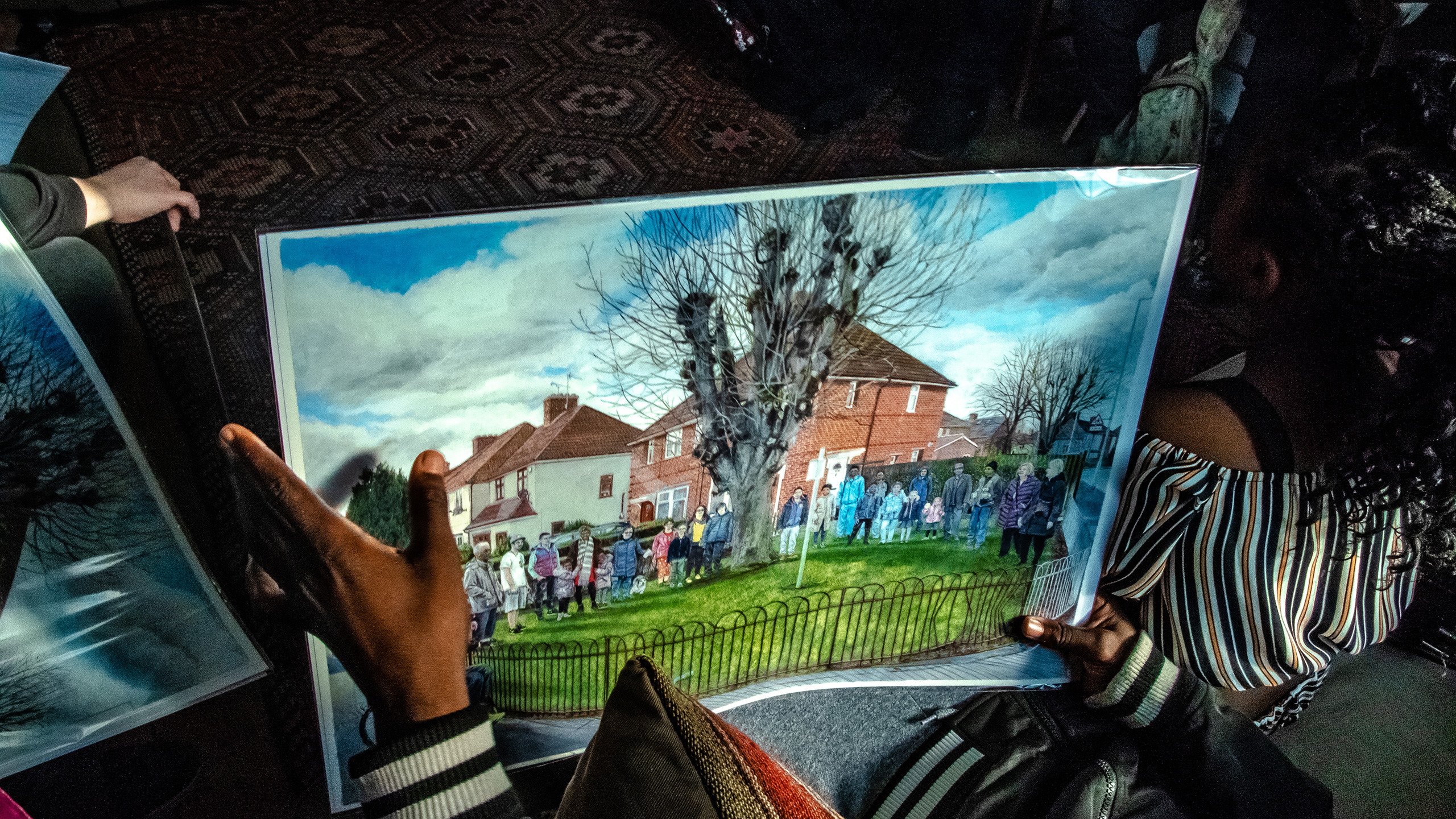 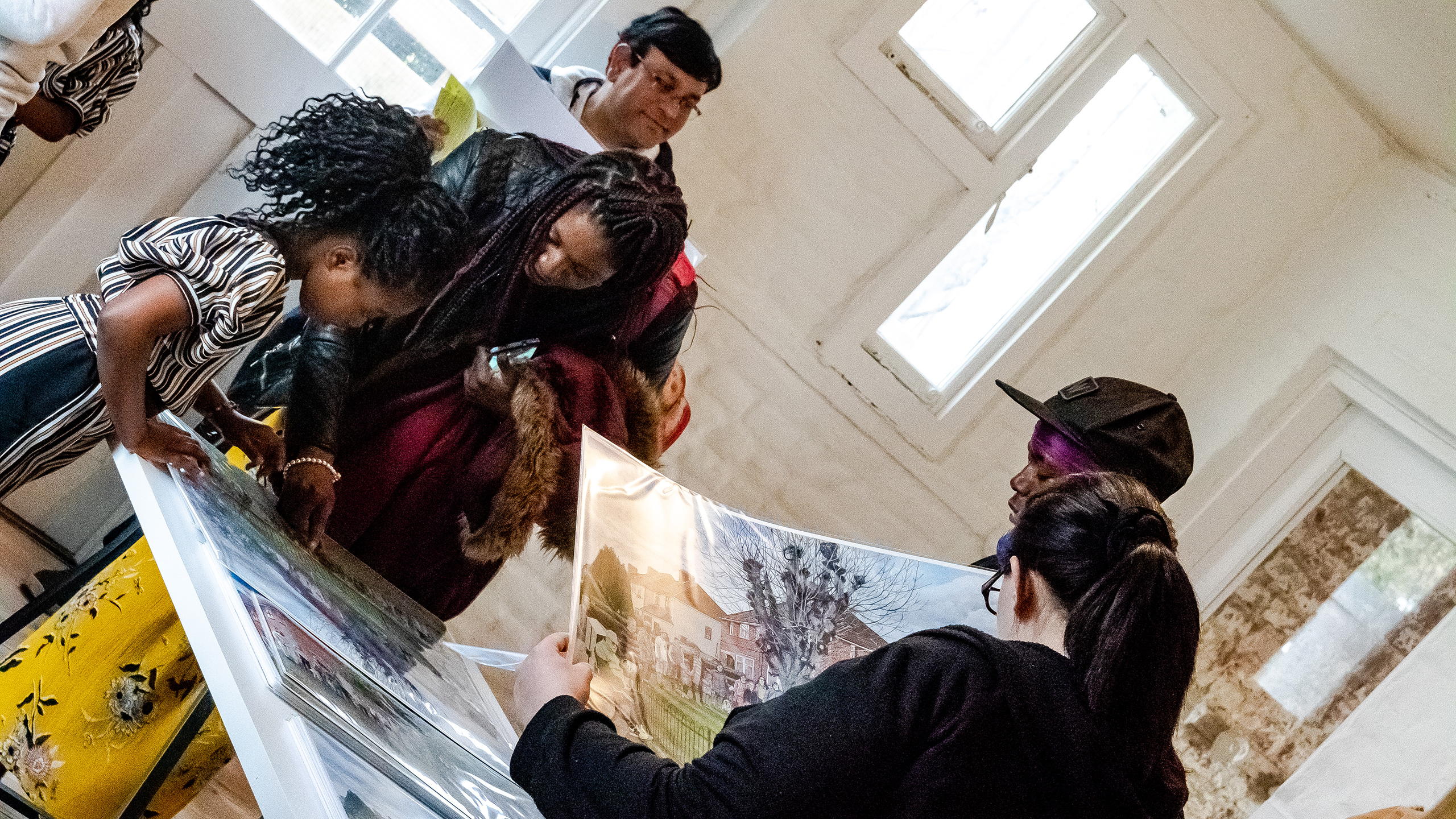 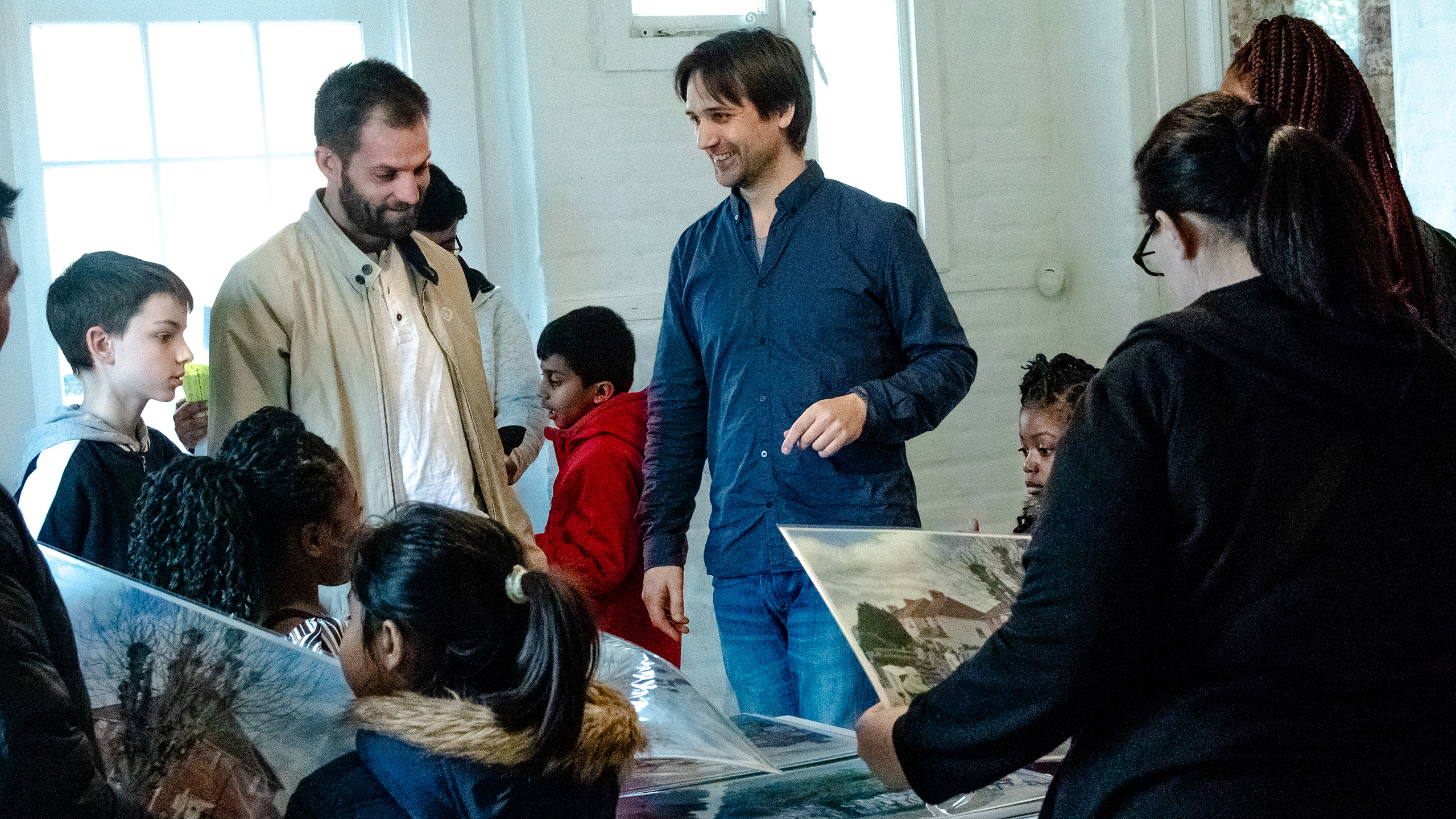 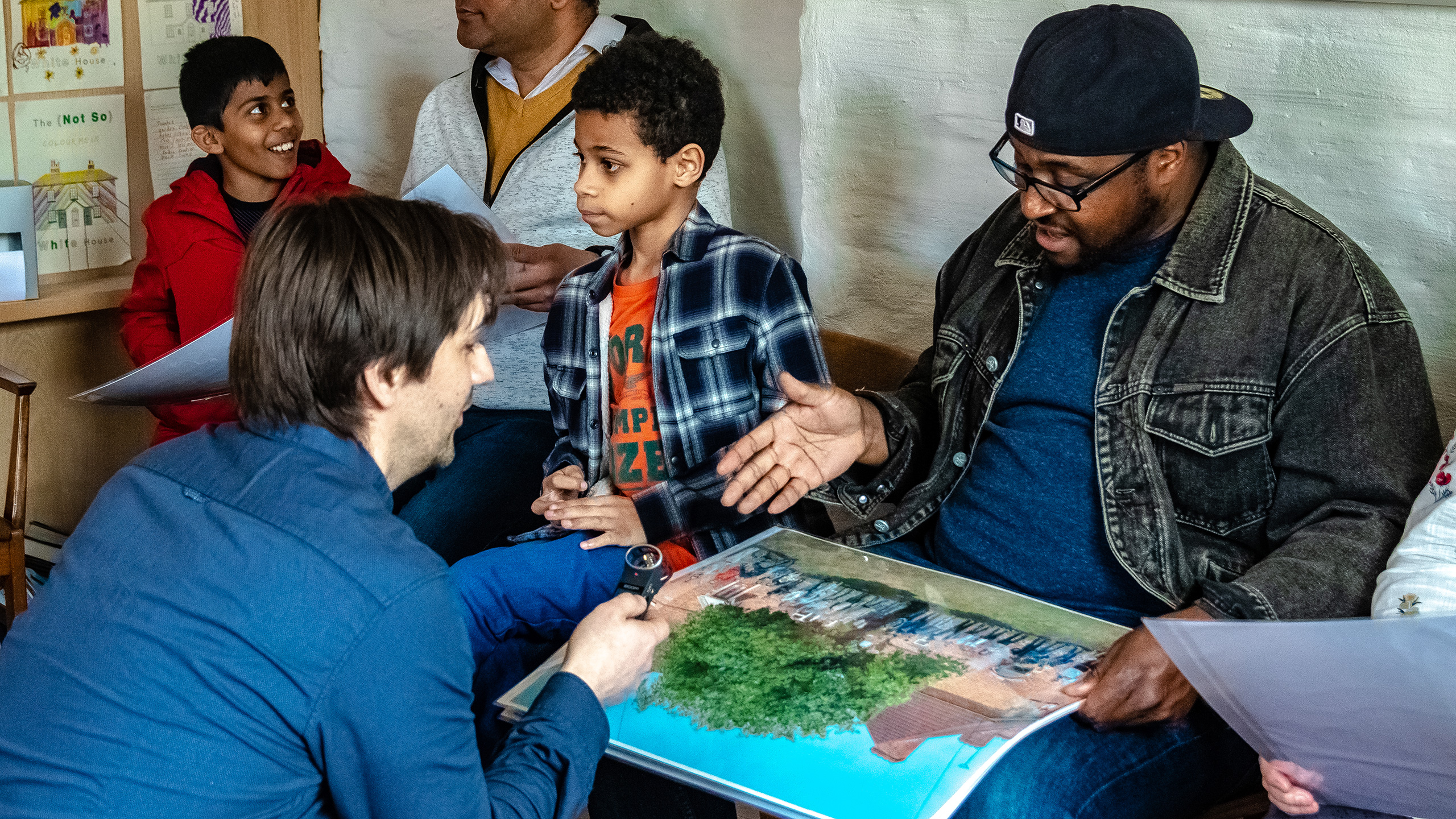 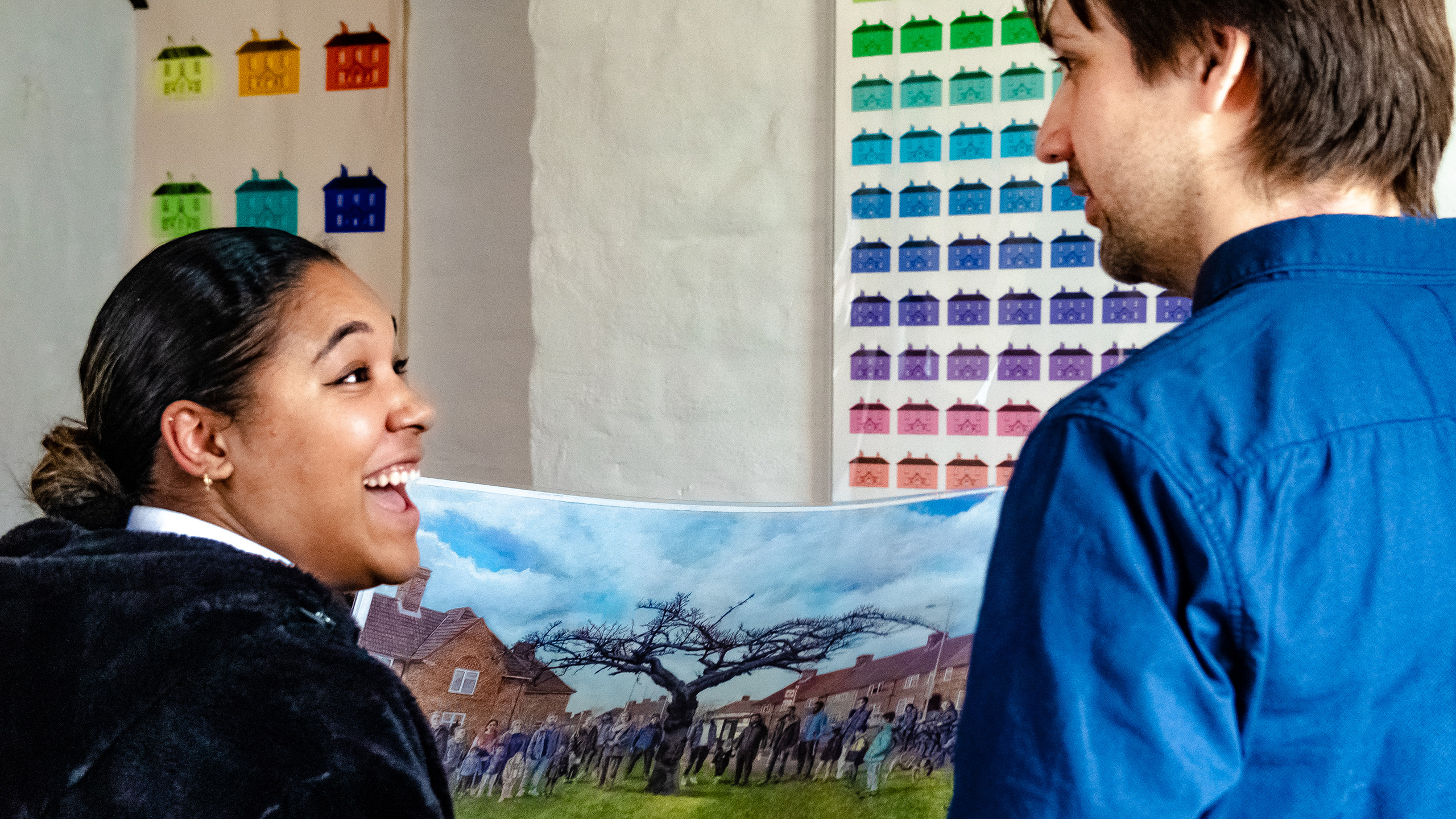 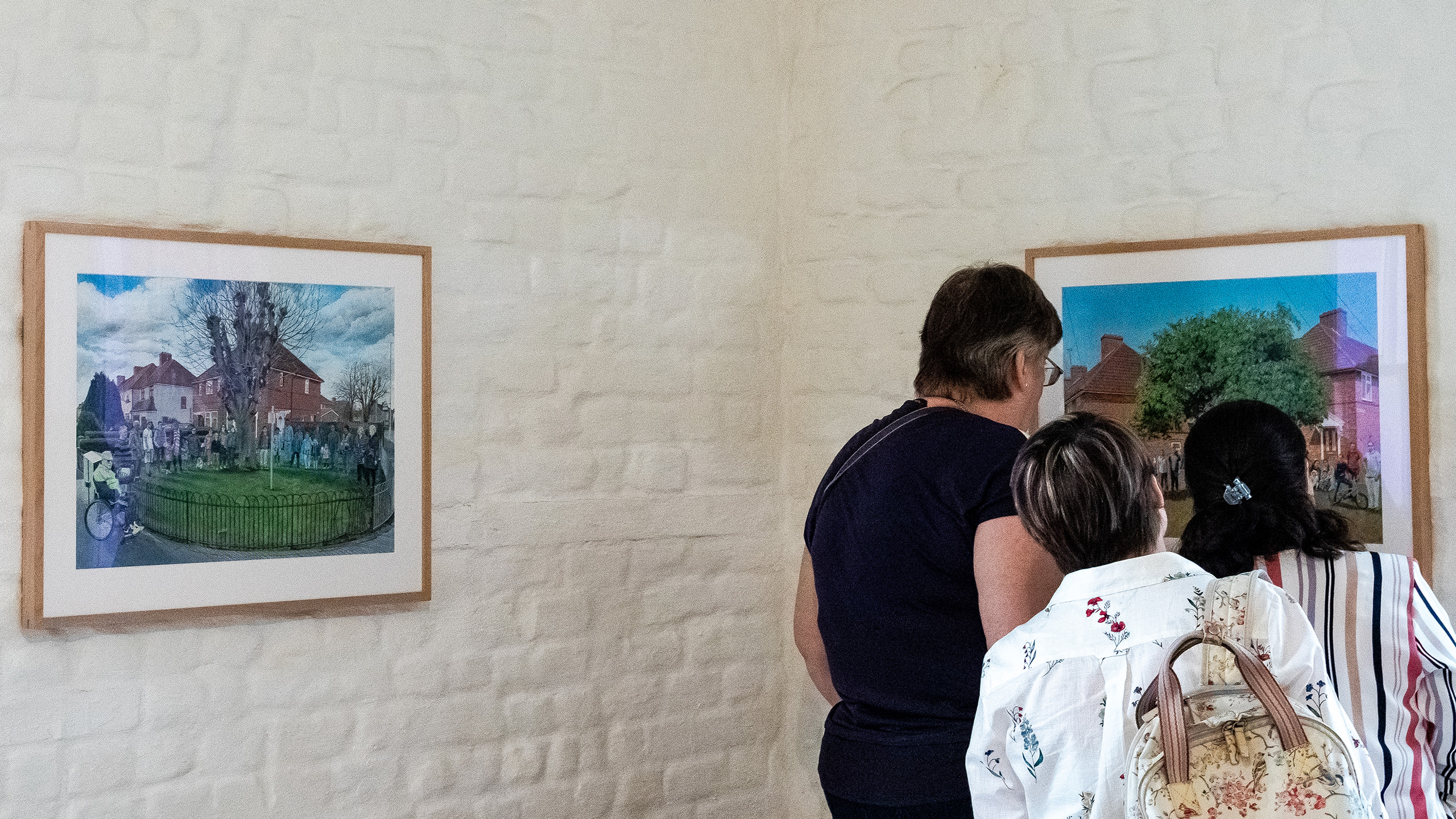 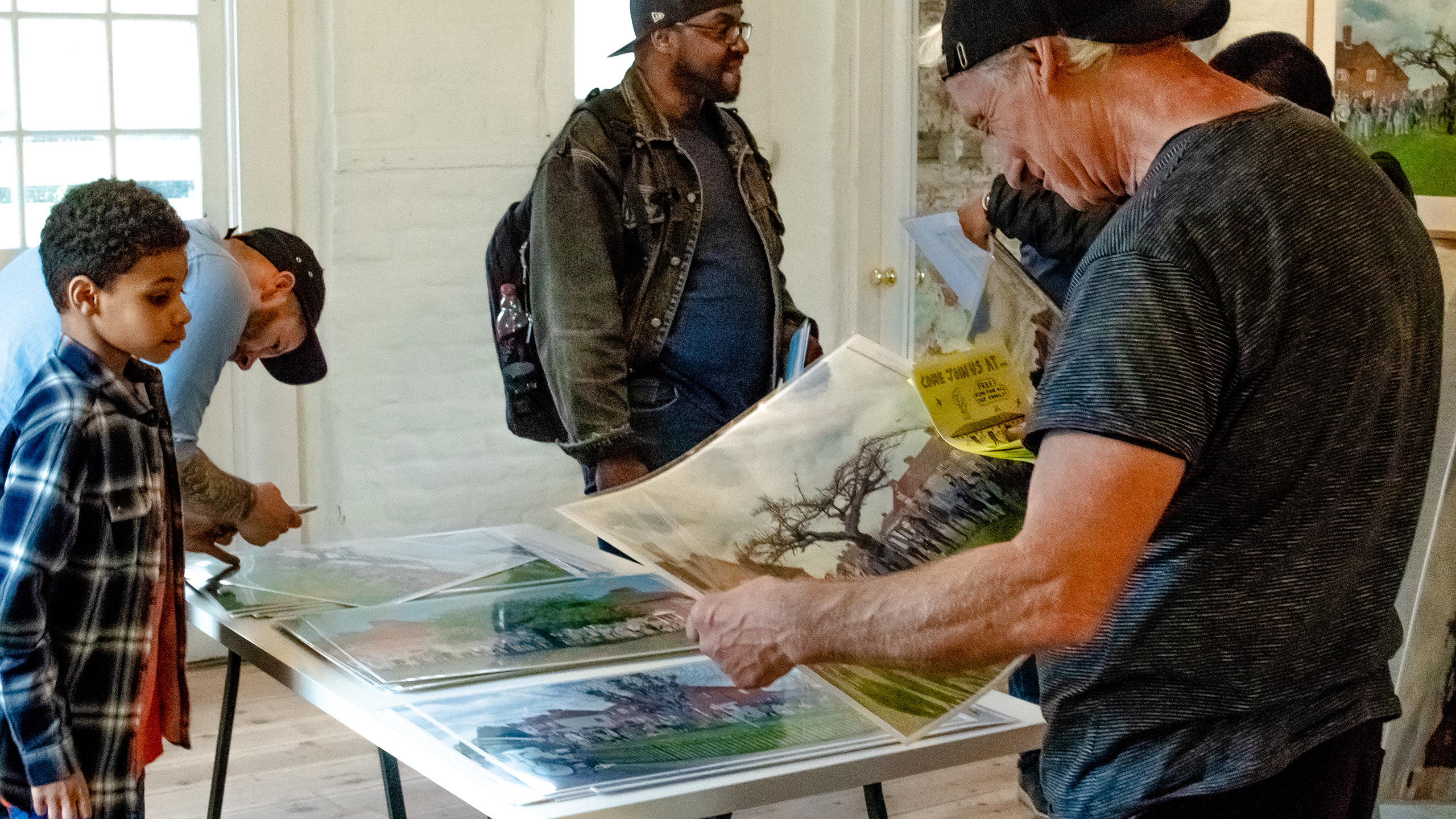 A year after my residency had finished I called everyone and invited them for the final exhibition at The White House. Unfortunately, I couldn’t reach everyone. Some numbers didn’t seem to exist anymore or were written down incorrectly. Out of a total of 80 participants, 20 people showed up for the opening. All received a printed copy and they were able to meet the other residents. I asked everyone to sit together in the living room, effectively restaging the paintings that I had made.

During a short presentation I explained about the phenomenon of trysting trees. One famous example is that of the Reformers’ Tree in Hyde Park in London, where an oak tree became the focus of protests in 1866 by the Reform League, a group campaigning to give all adult men the right to vote. After a few more examples I asked the participants to think of their own reasons why they could have gathered around the tree if the painting would have been real. For which ideal would they want to protest and gather?

The people in the room gave several reasons. One said that they could form a ‘neighbourhood watch group, to “fight crime” or to set up a team of people to “clean up Dagenham, because we are proud of where we live”, after which a roar filled the room. Another person imagined the group to have gathered around the tree to save the trees that are in danger of being cut down. Another person wanted to come together in order to “save the vulnerable in the community”, whereas the person next to her said that she just wanted to organize a street party around the tree. One of the children agreed and wanted the people to dance around the tree. A man continued by saying that he had the wish to come together to “show unity despite our multicultural backgrounds” and “to show peace and harmony”.

Furthermore, there were ideas to have people come together for an art class, “just to broaden your mind”, because all the people in the room already shared the fact that they were interested in the painting in the first place and thus already showed an interest in art. Then an older lady in the corner began to speak: “I’m probably the oldest person in this room who has lived here for over 60 years. There is a complete change of demographics nowadays. And it doesn’t pull people together, like how it used to be. There needs to be more activities that join people within the community.” She continues: “We have to rebuild the community, because we are losing it. And we need to understand each other more, I used to know my neighbours and now I haven’t got a clue”. I tell her that is one of the reasons we have gathered here today.

Then I ask the last person that remained silent the whole time. I ask him: “Do you have a clue why you have gathered around the tree?” He answers: “It isn’t a great one but it looks like we are all waiting for something, we are waiting for something to happen, could be a concert or a speech, we are all looking in the same direction. Maybe we are looking at you for the answer”.