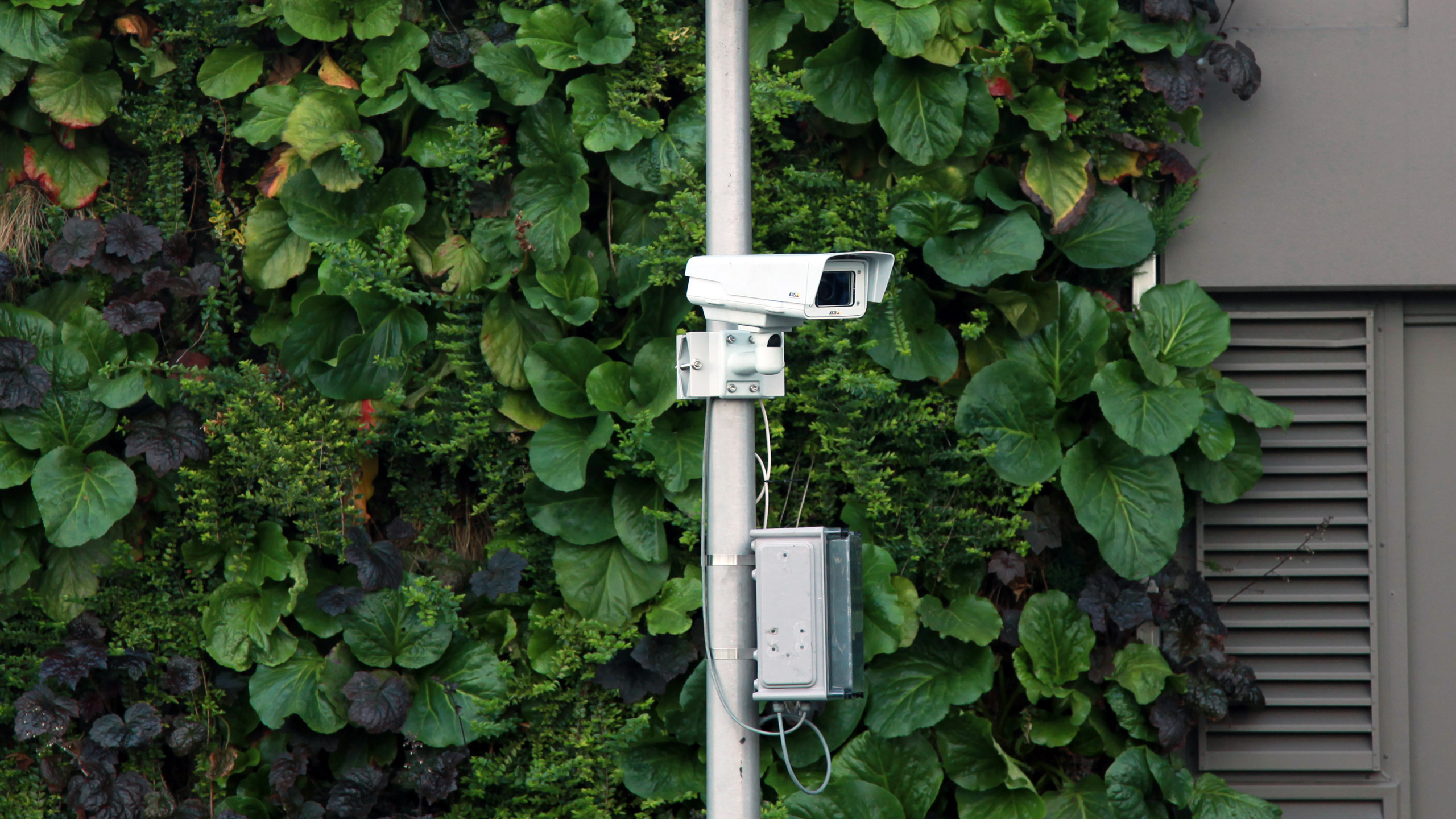 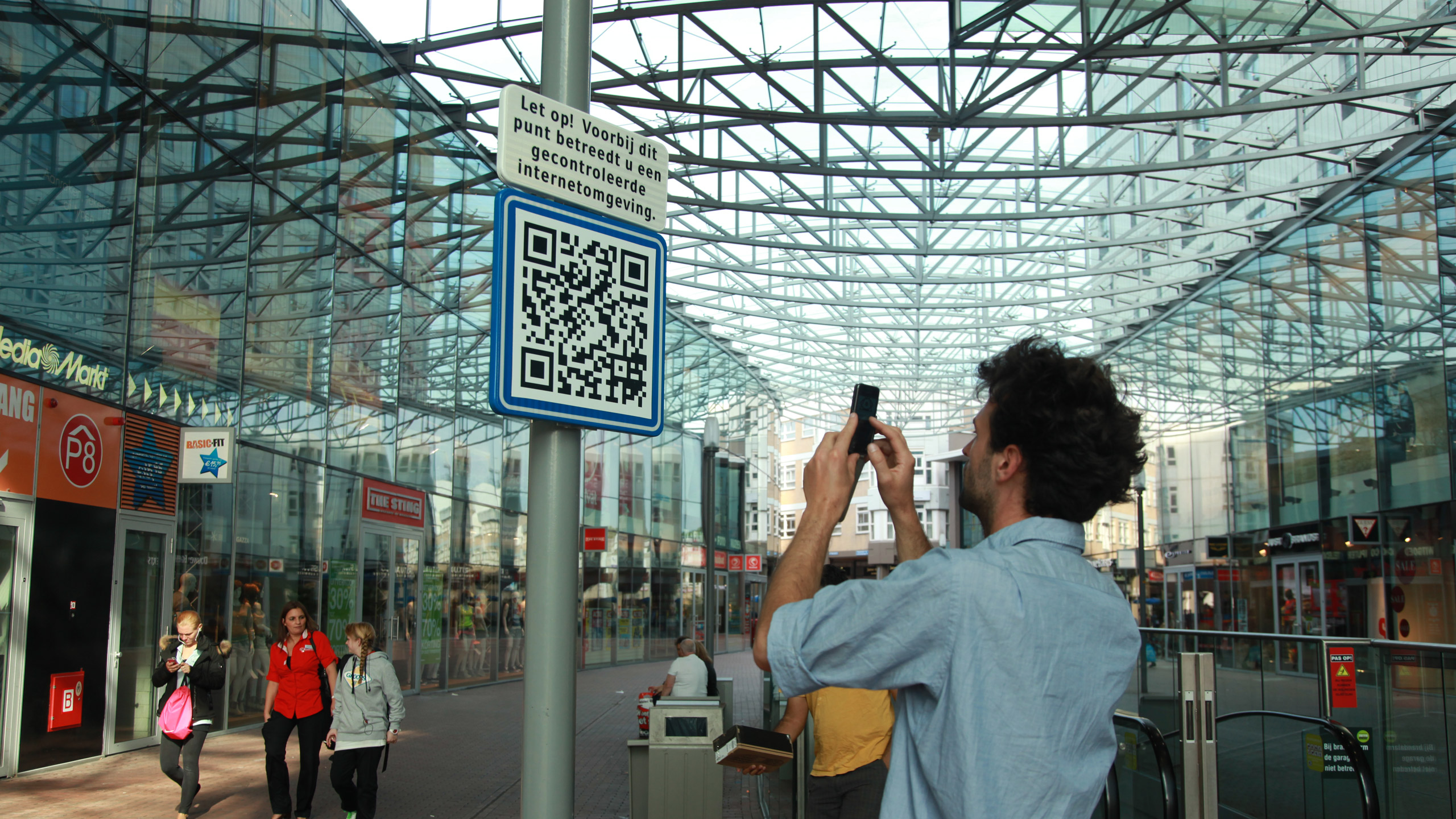 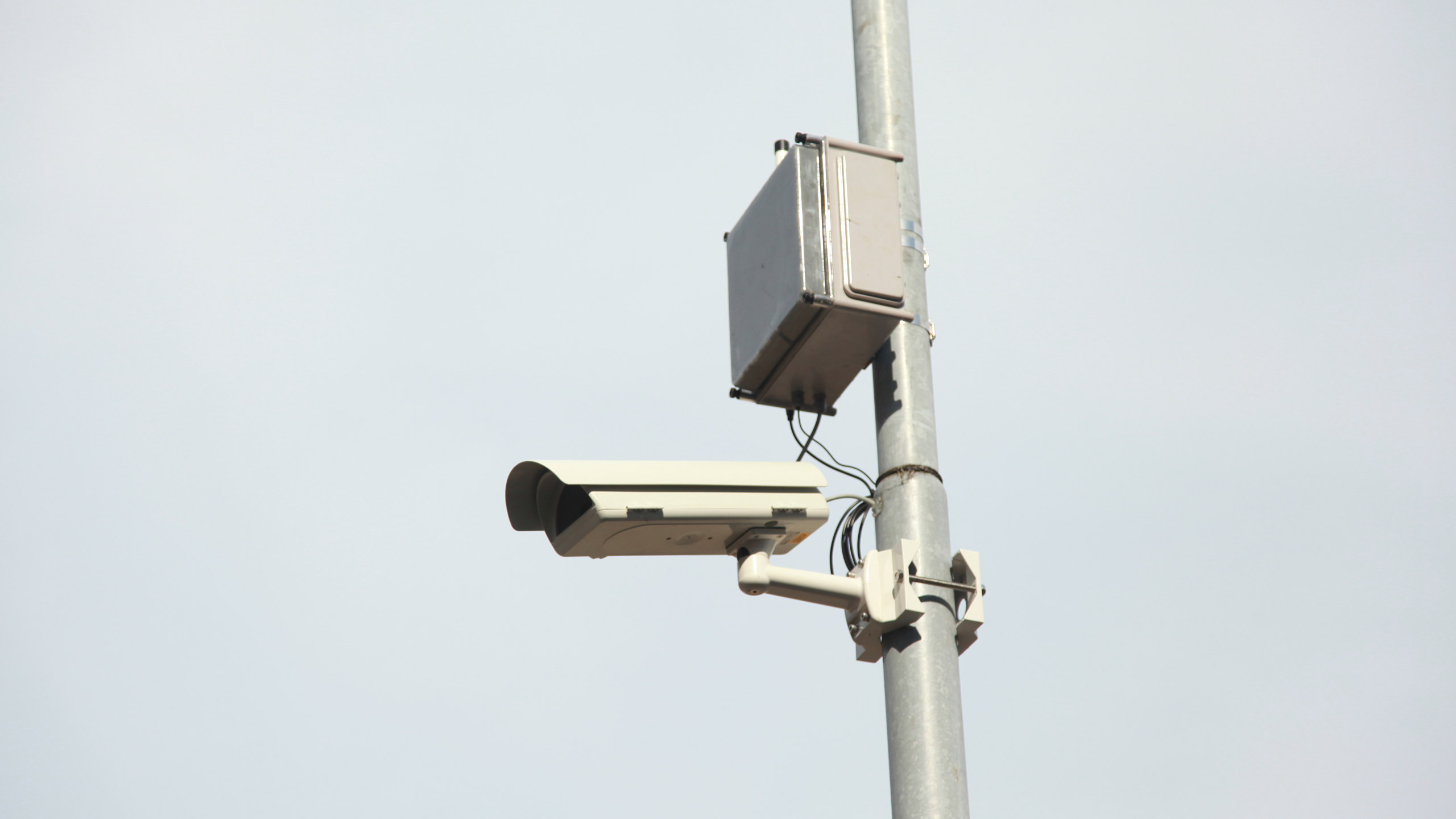 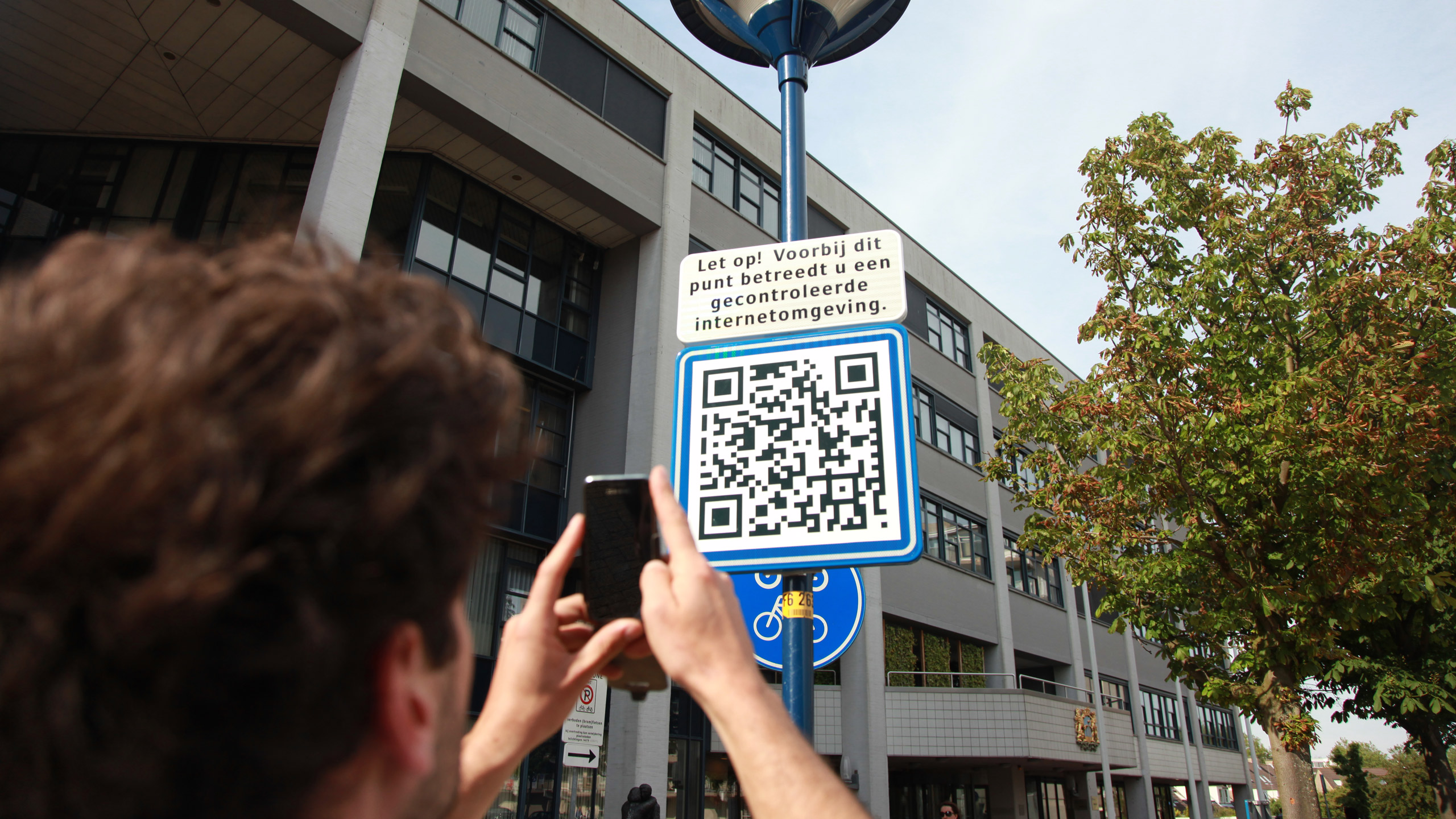 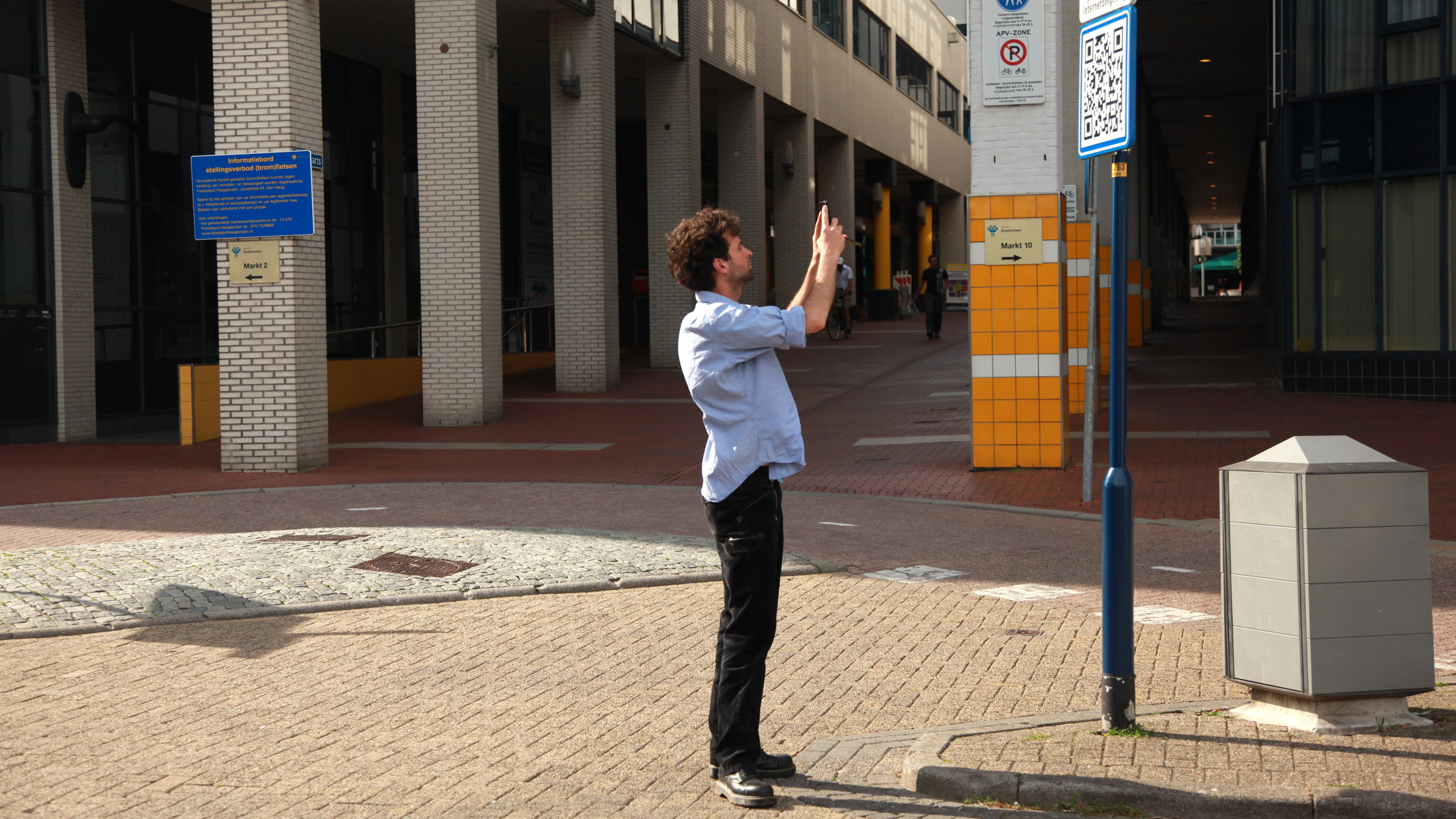 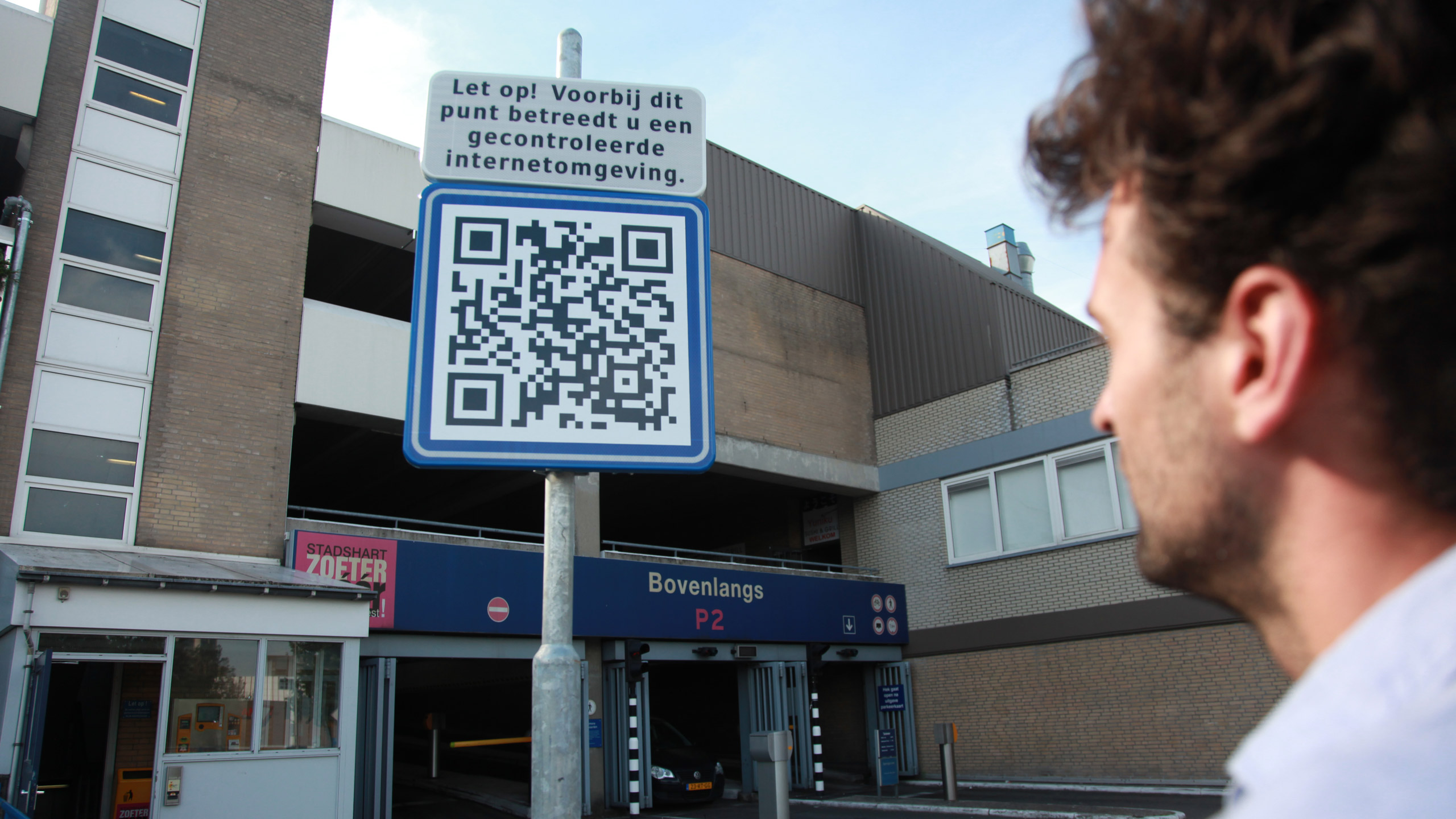 The project aimed to investigate to what extend people feel the need to protect their privacy. The intervention consisted out of security cameras and signs with QR codes, installed on three different locations throughout Zoetermeer. When passersby scanned the codes with their mobile phones, they were confronted with a picture of themselves standing in front of the sign. At the same time an audio file explained the project and asked people to sign up for a two-day workshop about Internet privacy. After a few months a training was organized, where the participants learned about digital self-defence. The course aimed to increase awareness on the dangers of the rapid dismantling of our privacy, both in the city and on the web.

Privacy Statement was a project that explored the limits of our freedom. Does free, public space exist or is this an utopia? The internet is once created as a decentralized, public network in which information can be exchanged freely, but this freedom is increasingly limited. Governments and corporations, focus more and more on observing and controlling webtraffic. A development which also takes place in the physical space of the city. Through an intervention in the city of Zoetermeer the project investigated to what extend people feel the need to protect their privacy.

Zoetermeer brands itself as ICT city and invests in a new educational program on internet safety. Next to that ICT is getting more and more attention from the AIVD (the General Intelligence and Security Service of the Netherlands) and Interpol (world’s largest international police organization), both agencies have their headquarters in the center of the city. Furthermore the city center of Zoetermeer has a fully controlled, private shopping area with their own controlled WiFi network and CCTV network.

The project ‘Privacy Statement’ was situated on three locations on the border of this controlled zone. Here passersby got confronted with existing surveillance techniques in an unexpected way. When scanning the QR codes with a mobile phone, people saw a picture of themselves, standing in front of the sign. After a few seconds an audio clip started and the project was explained. Then they were asked to sign up for a training on internet privacy.

Personal information that is spread on the Internet, is stored and can easily be used or abused by third parties. The movement of the individual is almost fully traceable through an accumulation of different control techniques. The question is whether this far-reaching monitoring does contribute to a safe, open and democratic society? To answer this question Privacy Statement took the public on a search for free space that is not monitored. The quest took the form of a training on online security. The courses were open to everyone and focused on how the internet works, how data traffic is supervised and stored.