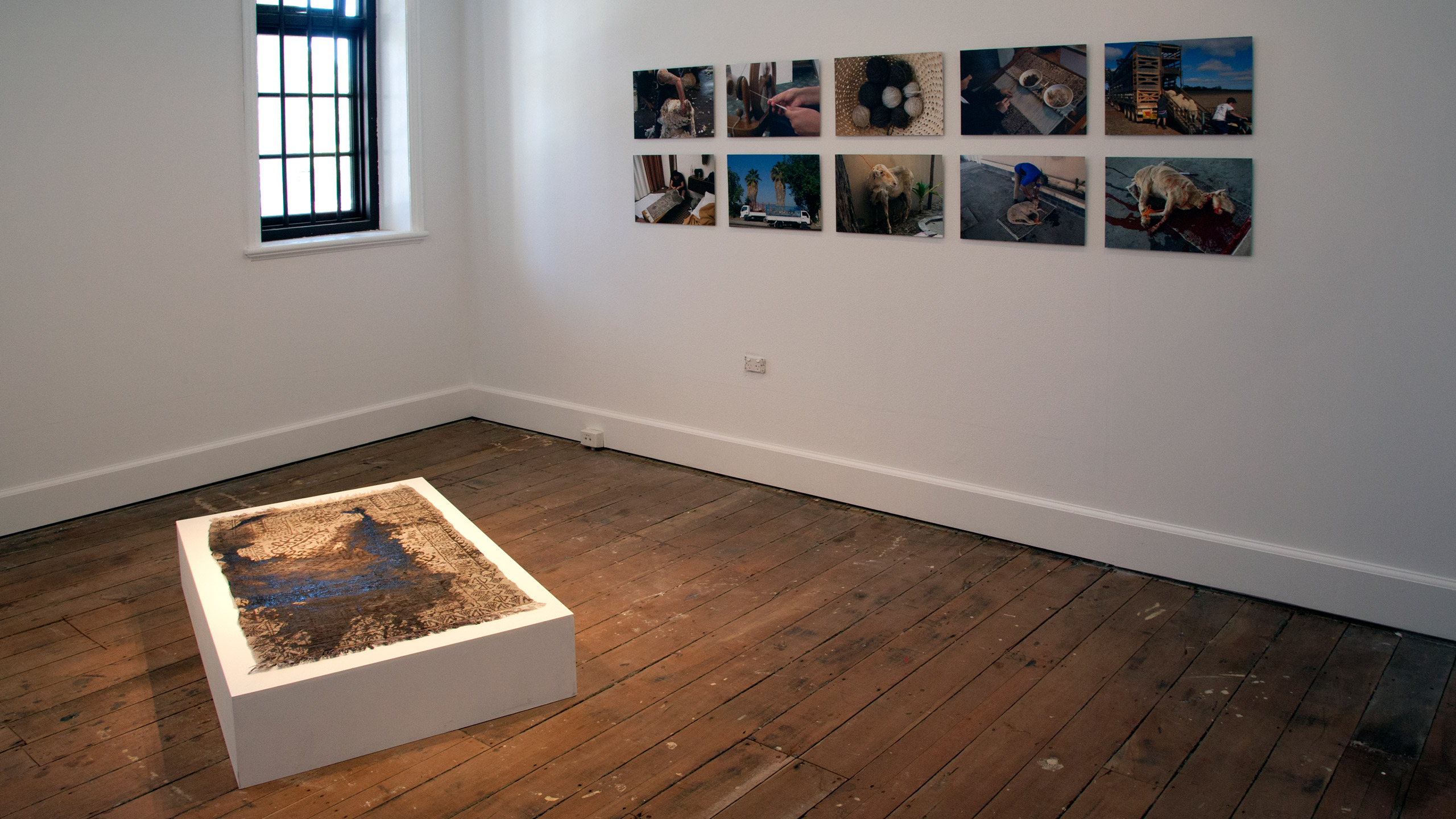 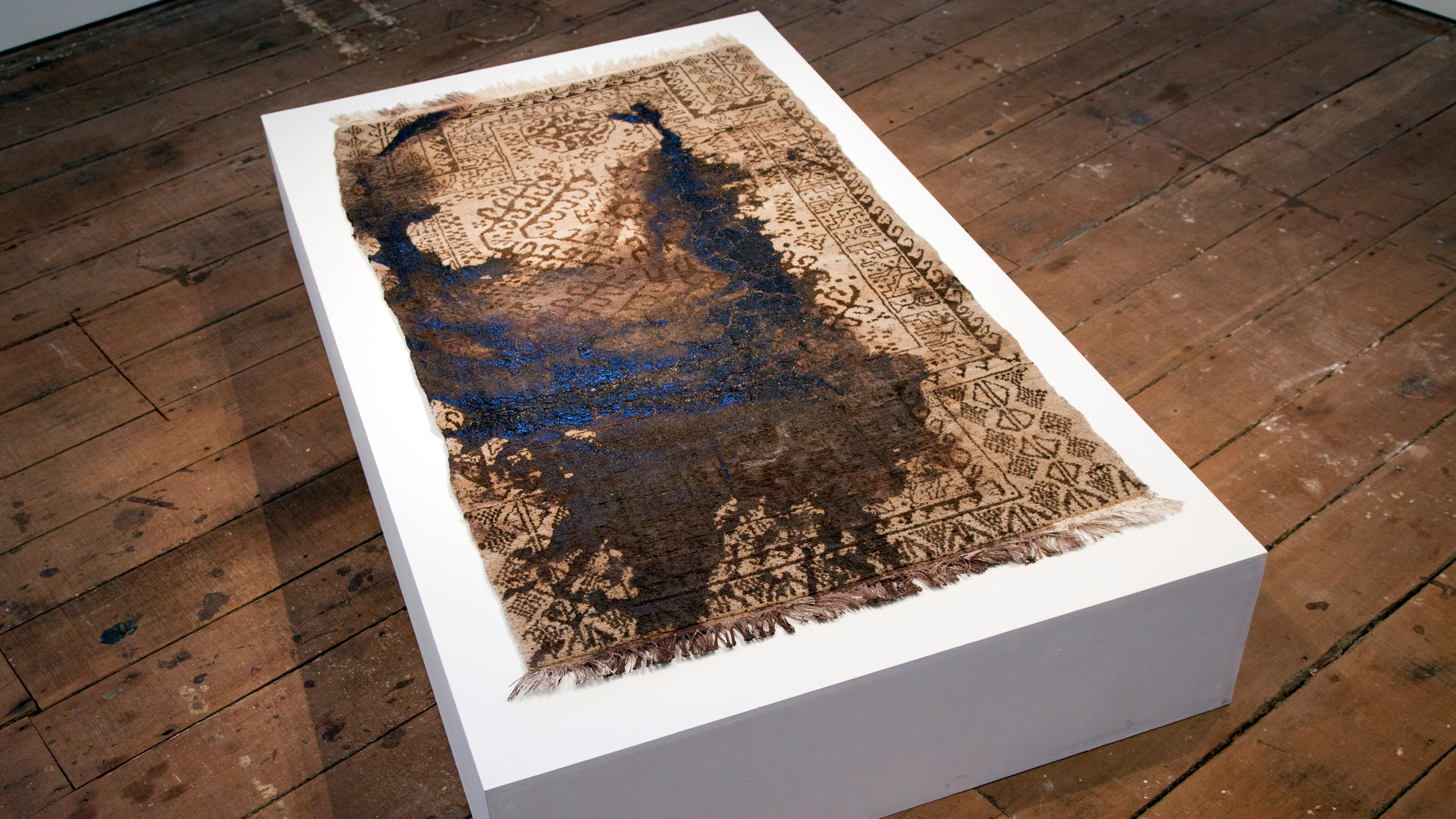 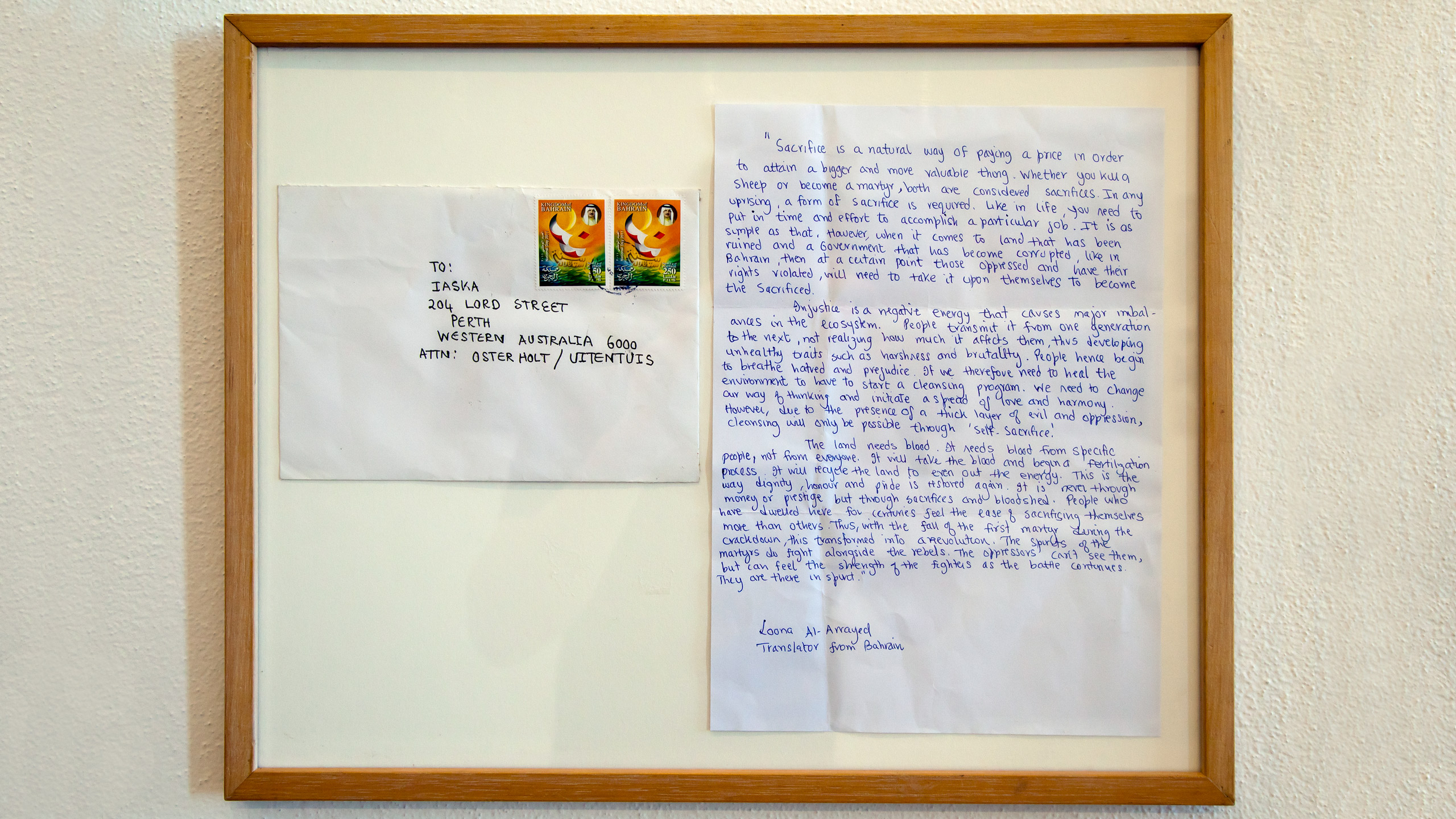 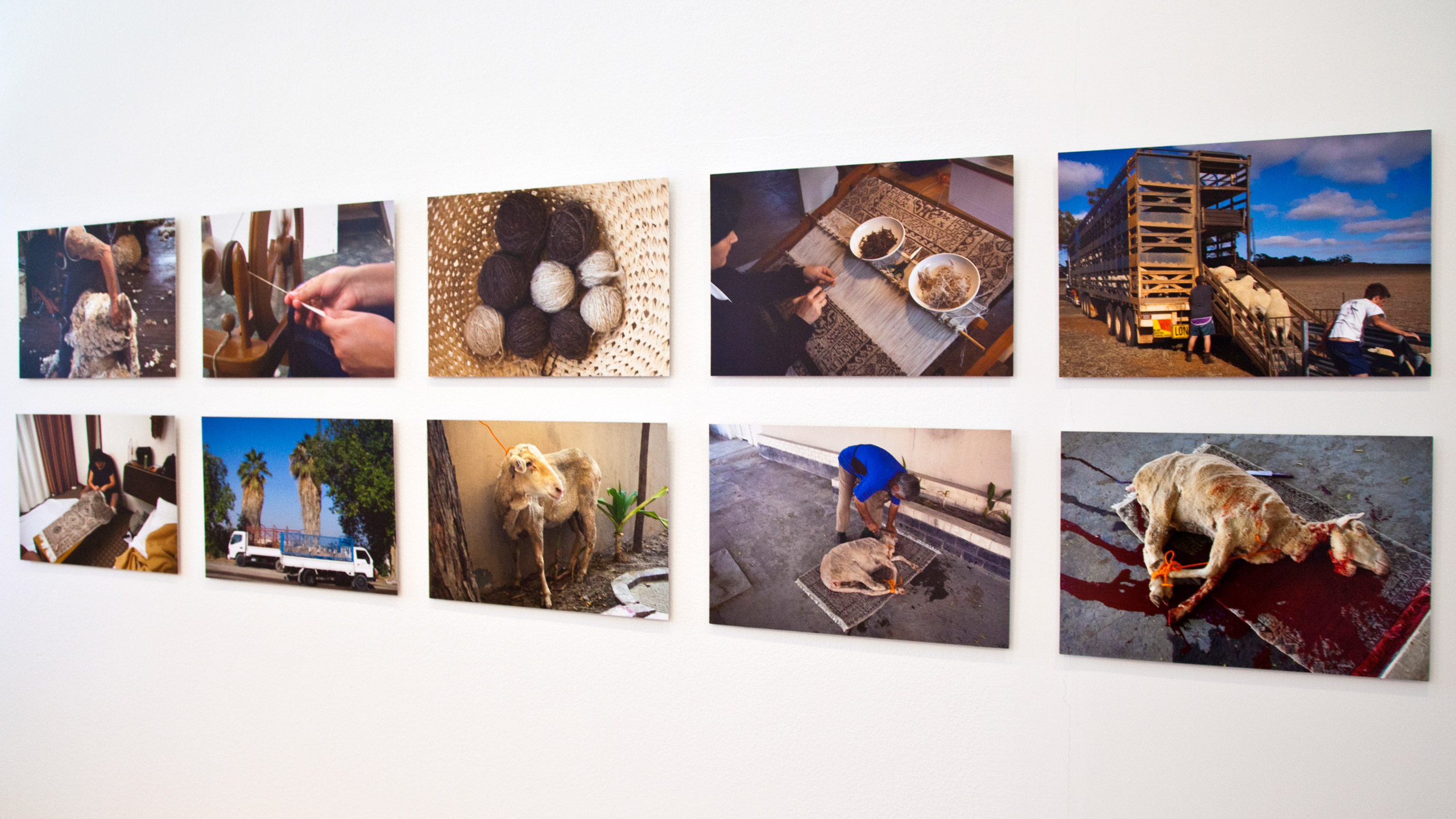 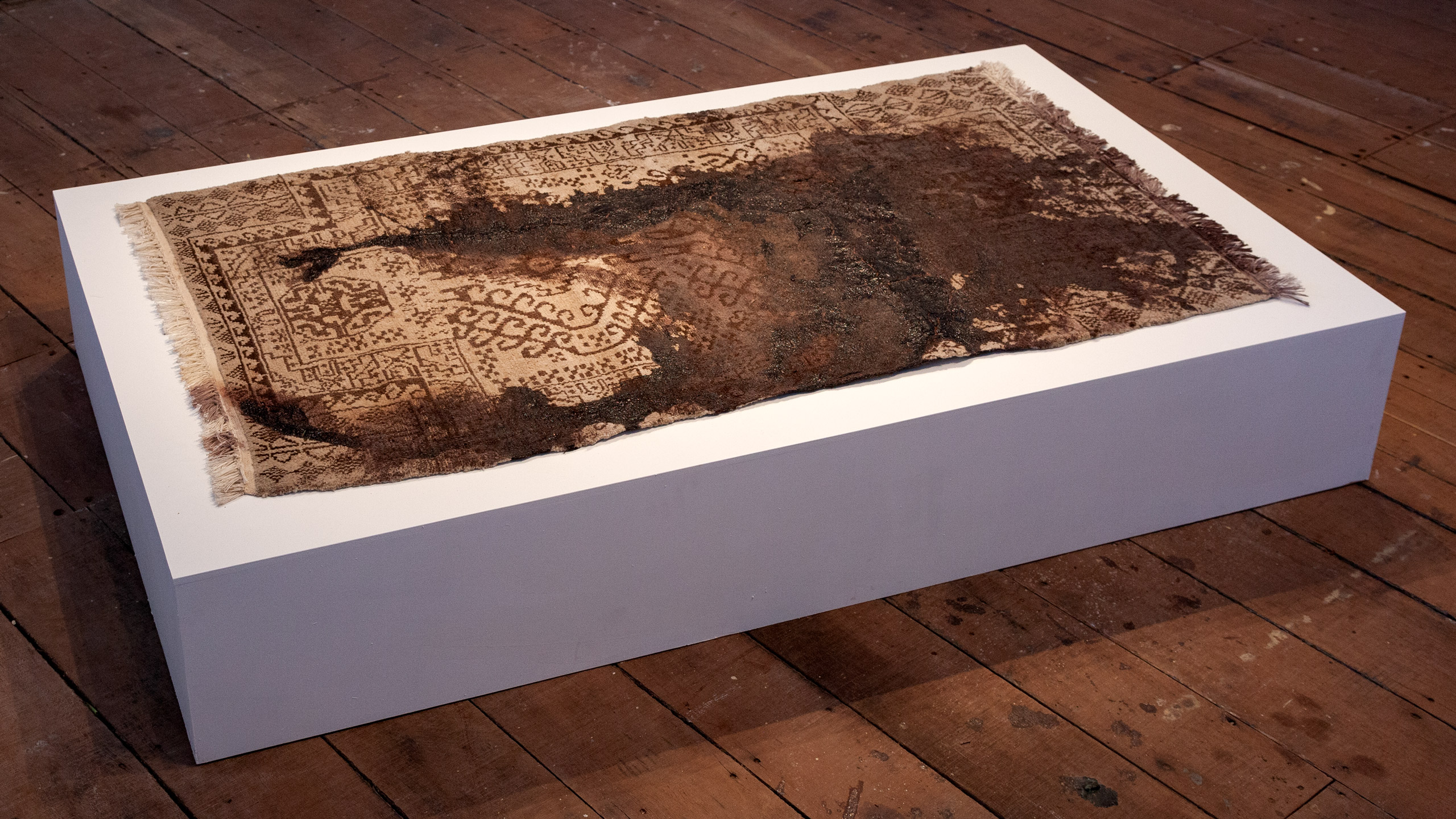 Project Stages: We have forgotten the sacrifice To the Other End Exhibition at Onomatopee 2011

The project deals with the live export of millions of sheep from Australia to the Middle East. The main part of the work is a replica of a hand knotted Baluchi funeral carpet that was produced in Australia and used during the ‘Feast of the Sacrifice’ in Bahrain. After the ritual slaughter of an imported Australian sheep, the blood-soiled rug was returned, but not until it underwent an extensive radiation procedure, as part of Australia’s import clearance process. The carpet was put on show in an exhibition in Freemantle, the port city, from where millions of sheep are transported.

‘To the Other End’ is a project that examined the live export of millions of sheep that are transported by enormous boats from Western Australia to different countries in the Middle East. The journey across the Indian ocean takes about five weeks, making it the longest journey animals undergo anywhere in the world. The project’s aim was to connect the two different cultures at both ends of the production line and critically study the ethical implications of the live export. The live export has become a most contentious issue in Australia. In the last decade this trade relationship became topic of strong debates between the people from the industry and the anti-live export activists.

The main part of this work is a replica of a hand knotted Baluchi funeral carpet. The wool used for this rug comes from Lake Grace, a small town in the wheatbelt region of Western Australia. With help from local farmers and crafts people the wool was shorn, spun and then used in the knotting of the rug. When finished the rug was brought to Bahrain during Eid al-Adha (the Feast of the Sacrifice). In Bahrain a local butcher slaughtered an imported Australian sheep on the rug. After the butcher anatomized the sheep, the meat was given to the poor. The blood-soiled rug was send back to Australia but not after it underwent an extensive radiation procedure, as part of Australia’s import clearance process. When the rug got cleared from customs it was put on show in an exhibition in Freemantle, the port city, from where the millions of sheep are transported.

Alongside this work, two writers, Loona Al-Arrayed from Bahrain and Michelle Slarke from Lake Grace, were asked to reflect on the project. Both produced texts that were also exhibited. Loona Al-Arrayed focused in her text on the meaning of religious sacrifice in relation to the political unrest in Bahrain in 2011. The text was sent as a handwritten testimony to the Freemantle art center and presented next to the work.

Slarke’s book was developed from conducted research and interviews with Bahrainis and Australians about the sheep trade between the two countries. Her text looks at the back-story to the debate and the complexities of the trade and cultural relationships of the people at each point of the journey, including her own community. The story is told through fiction informed by a personal perception of place and through the words and lived experiences of farmers, animal welfare activists, the sheep industry and community members from Bahrain and Australia, who rarely, if ever meet. The book examines the close up and distant views of what is local; of how to stand to the side and, as much as possible, to see other points of view.

We have forgotten the sacrifice →