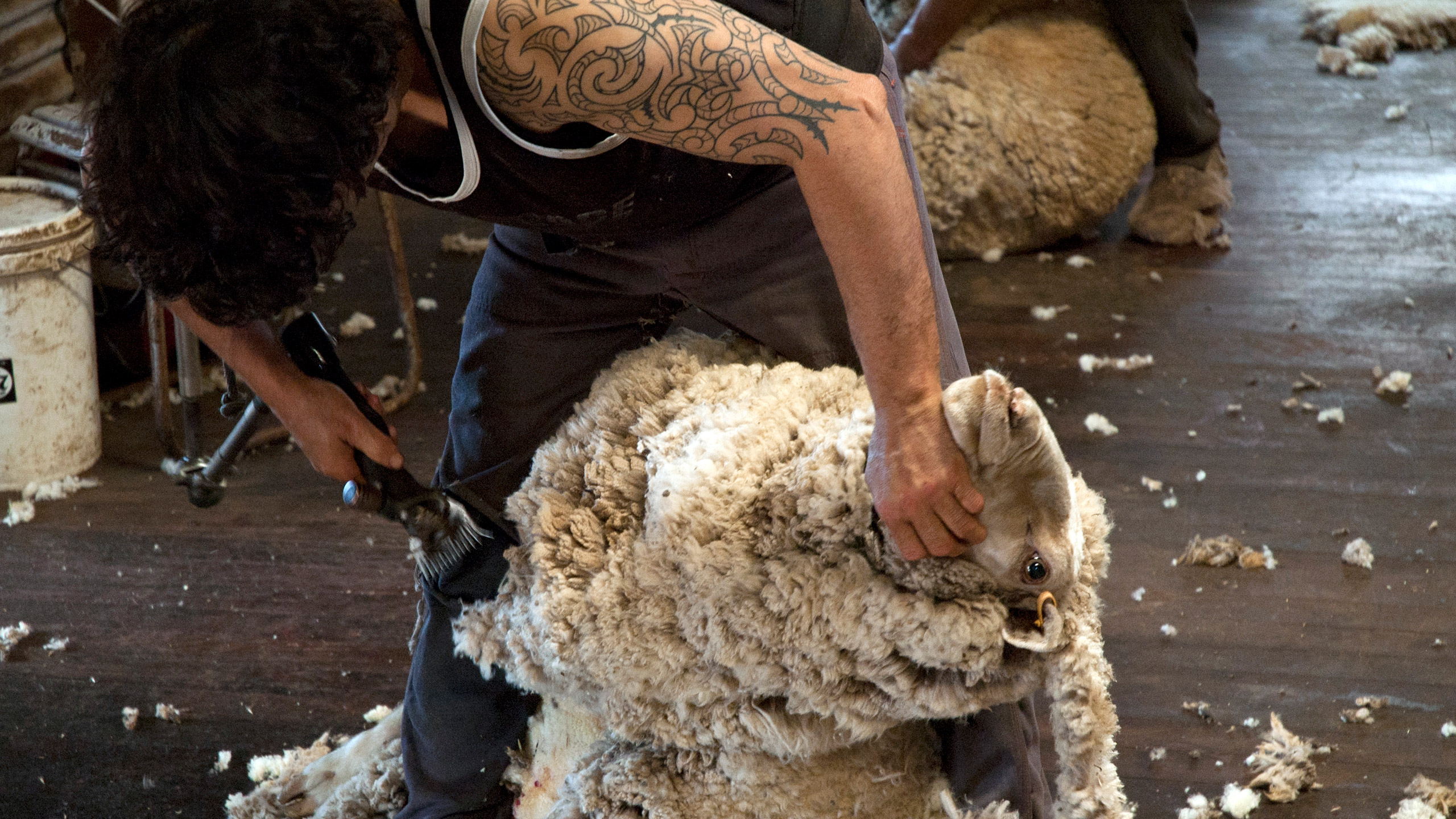 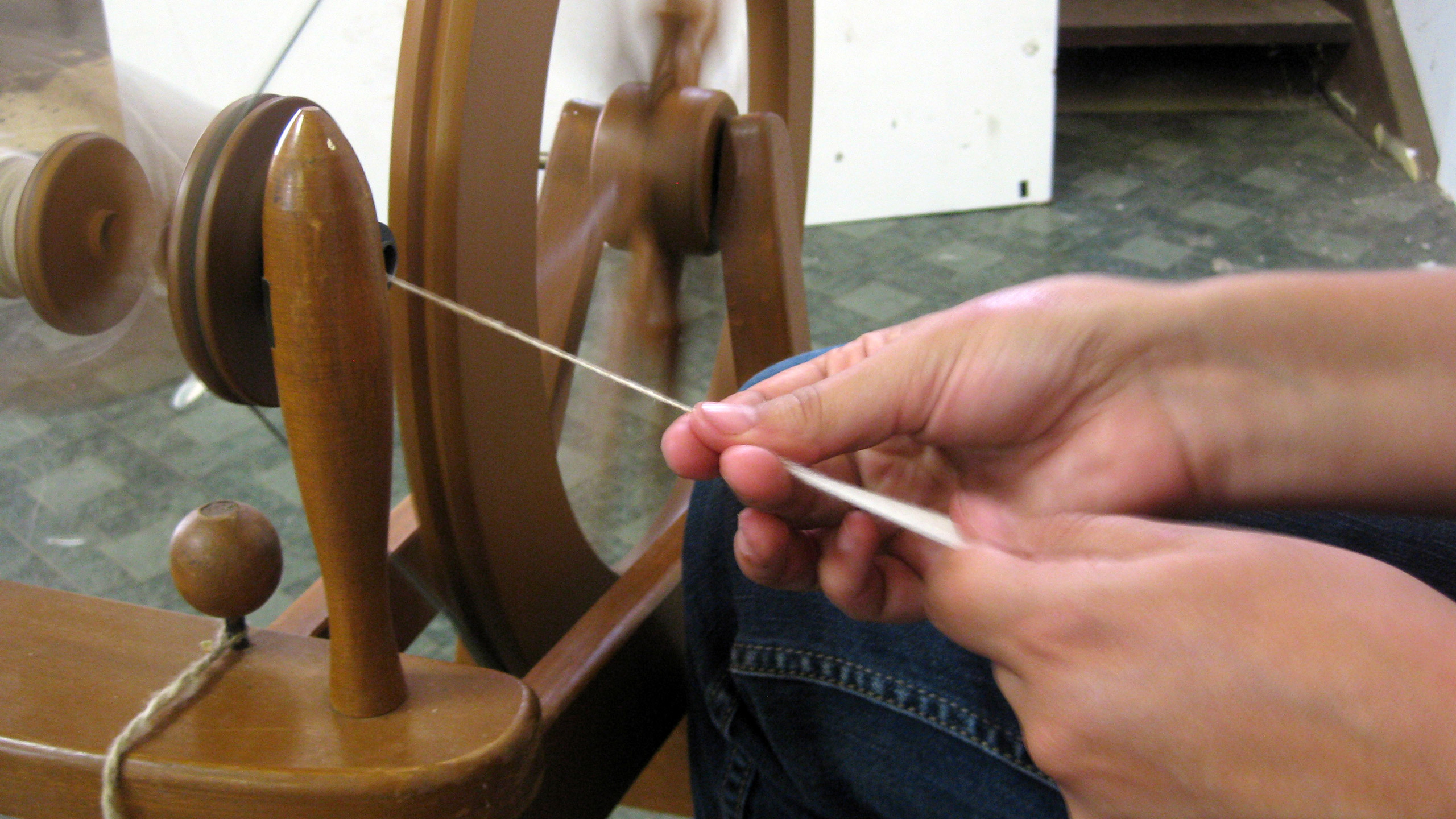 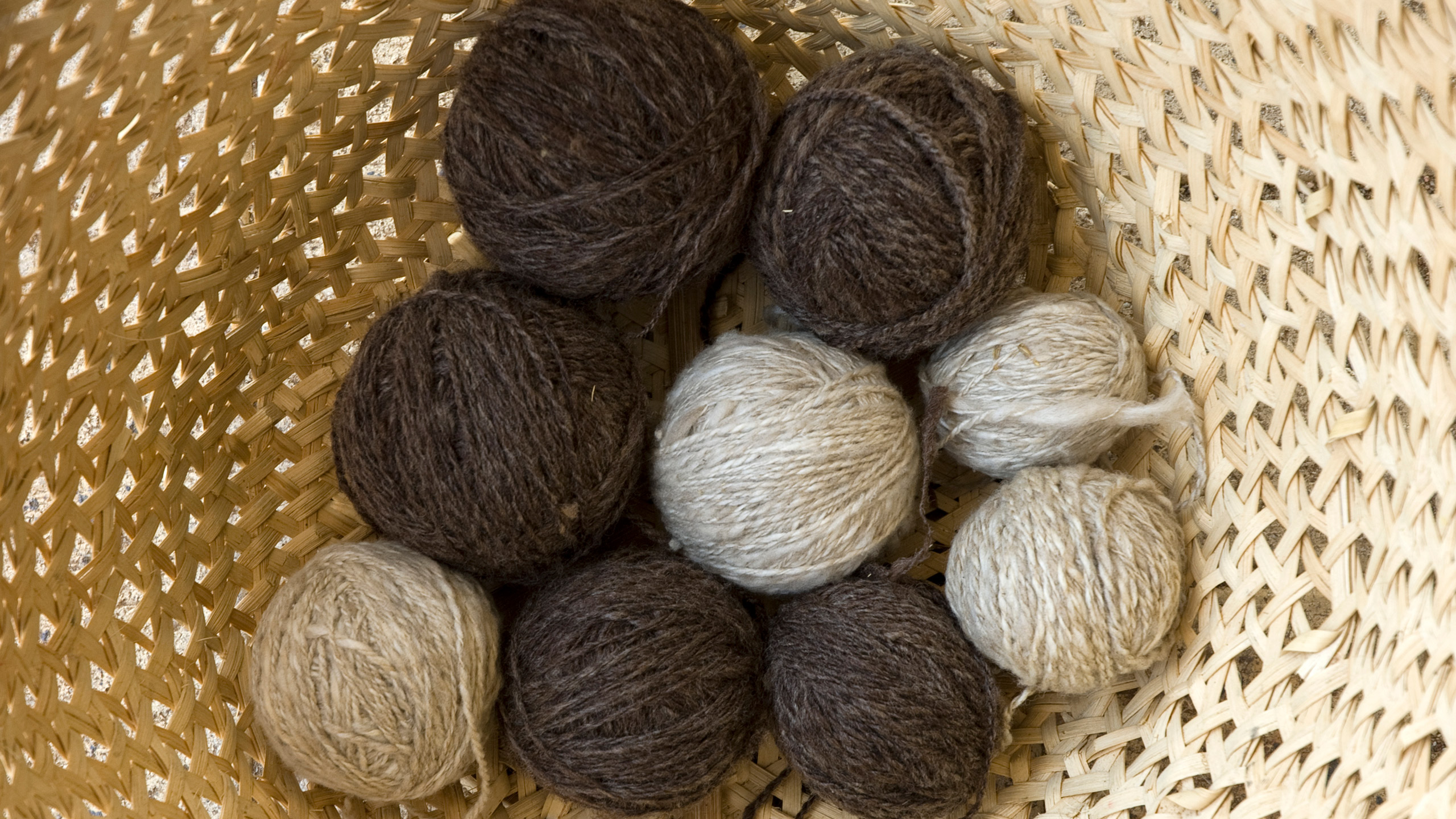 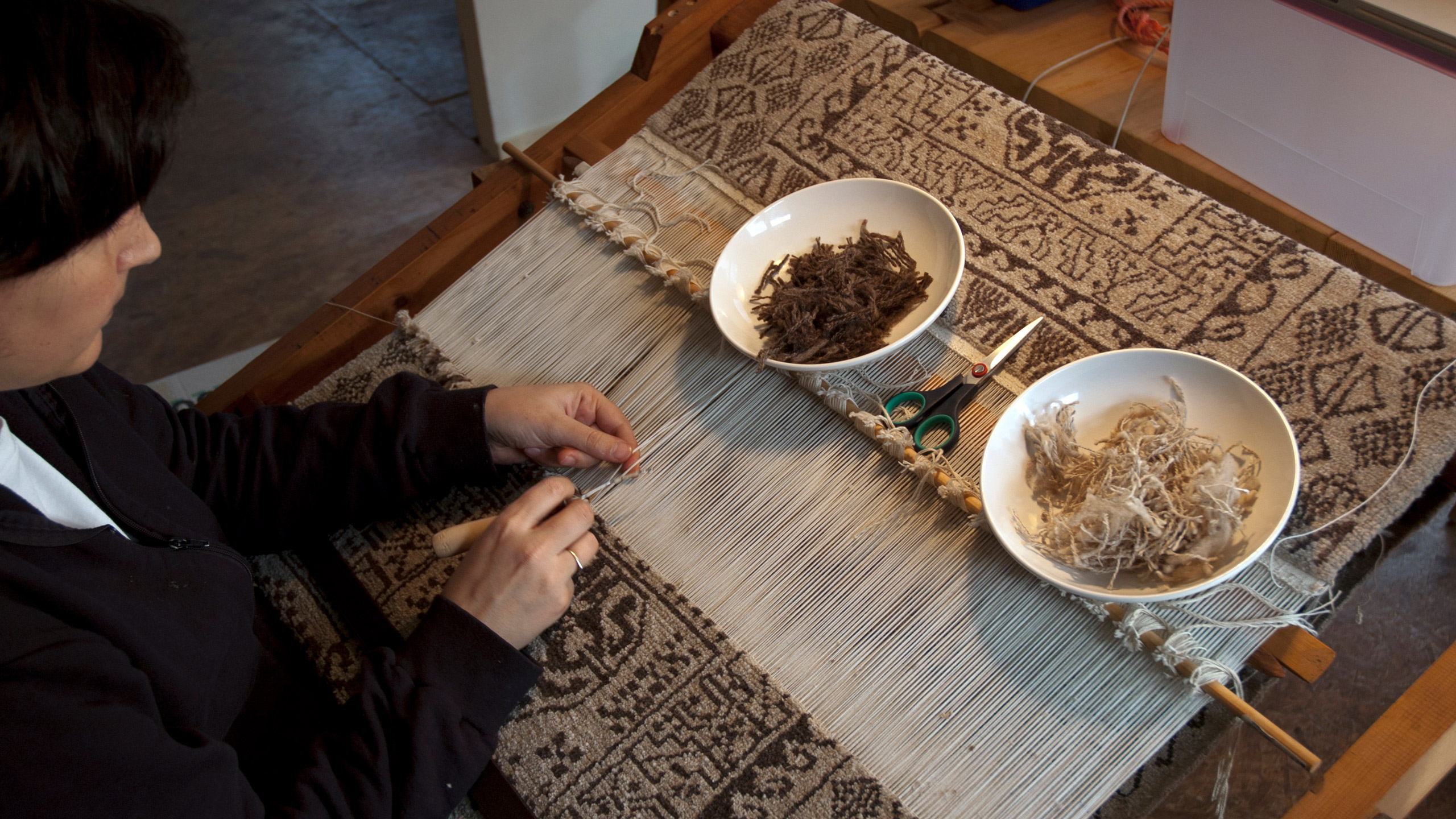 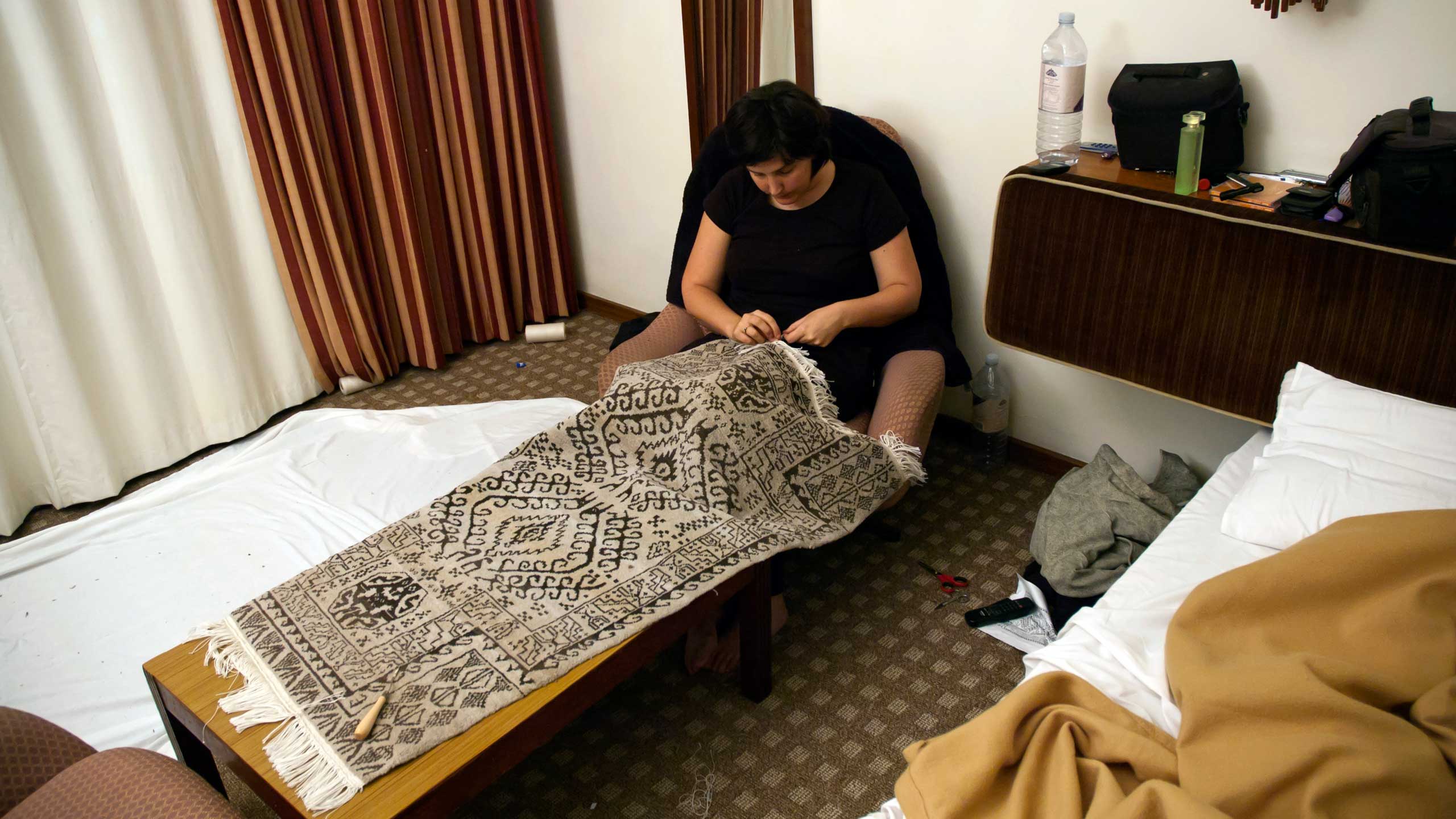 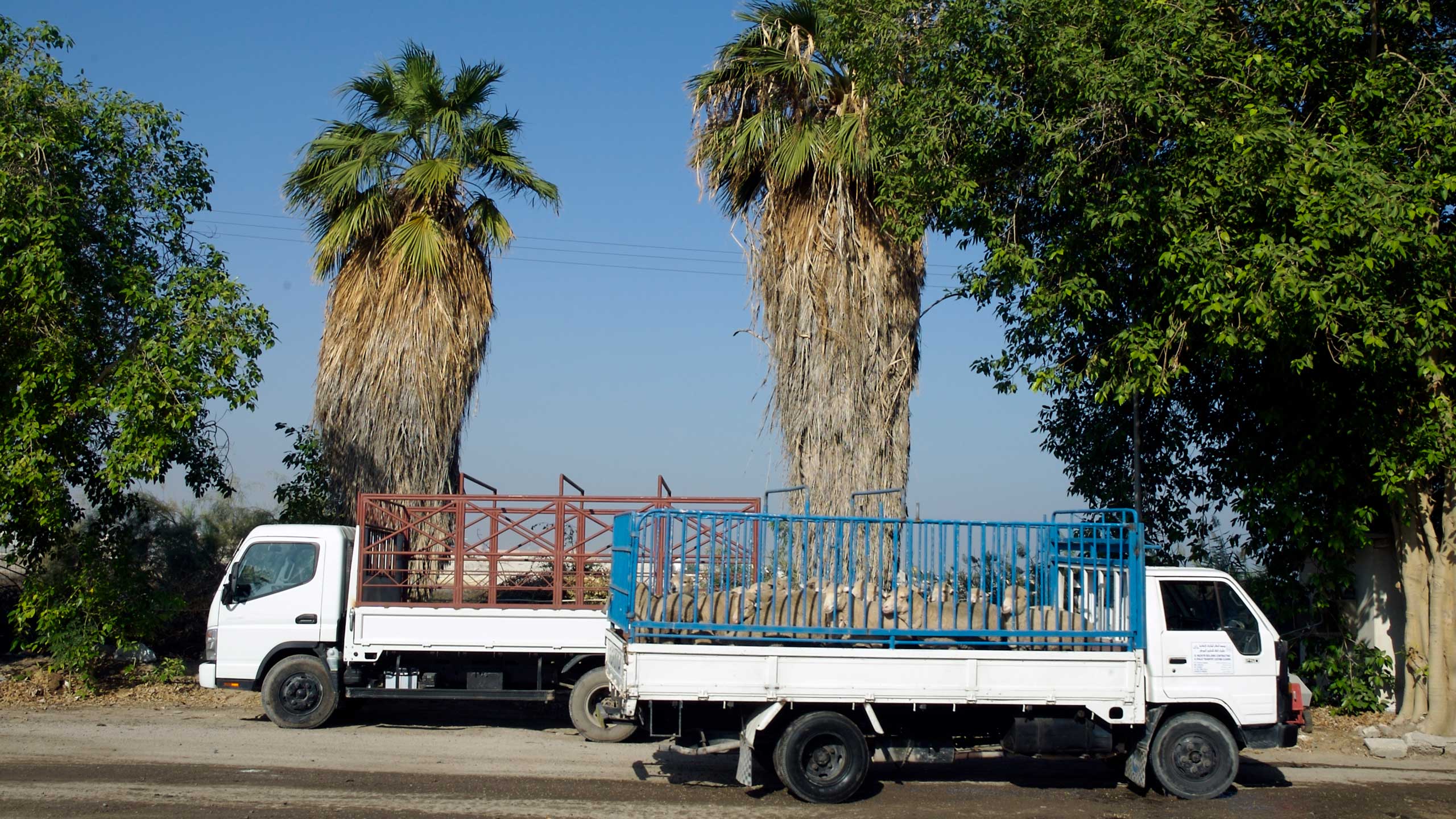 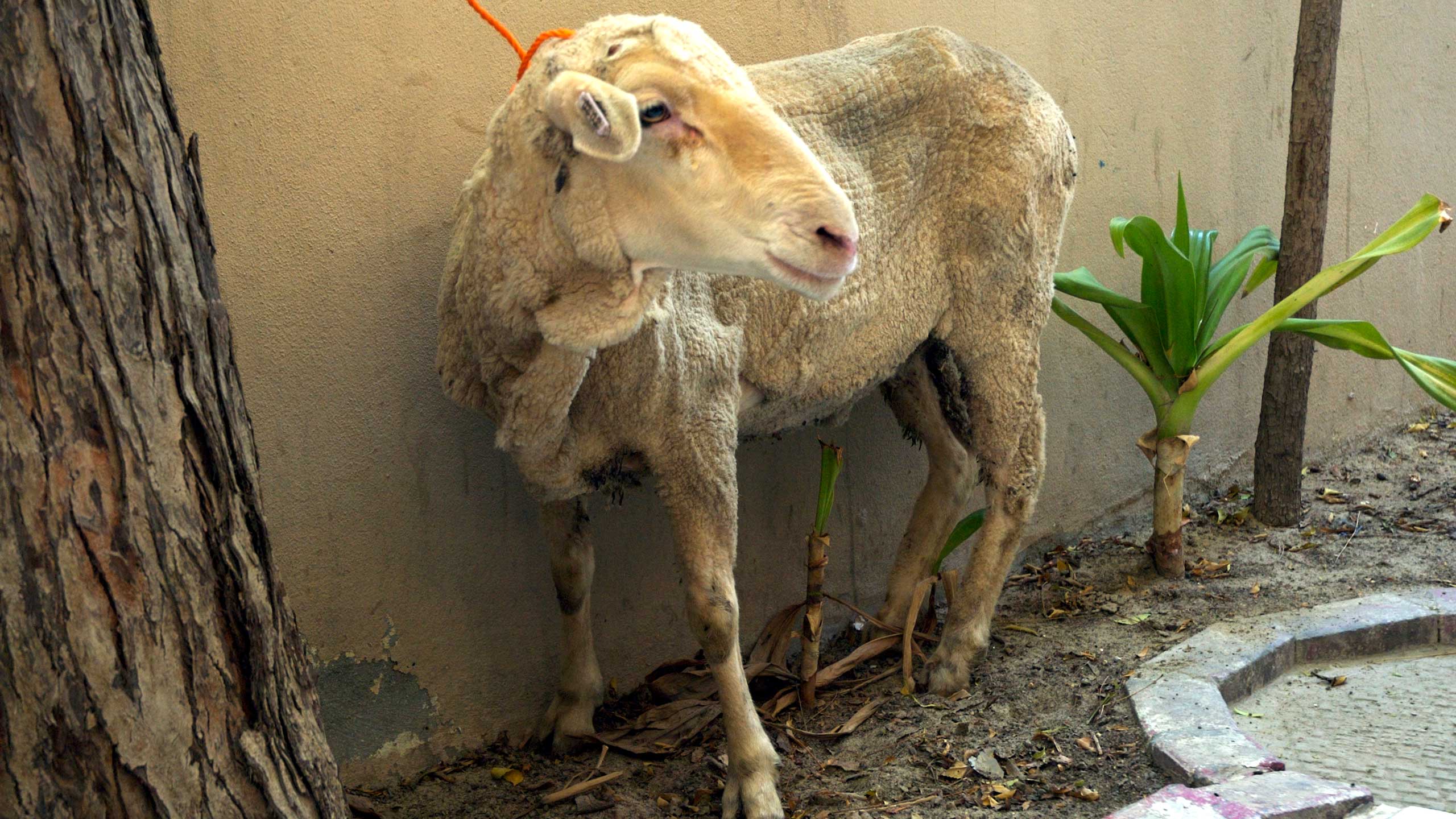 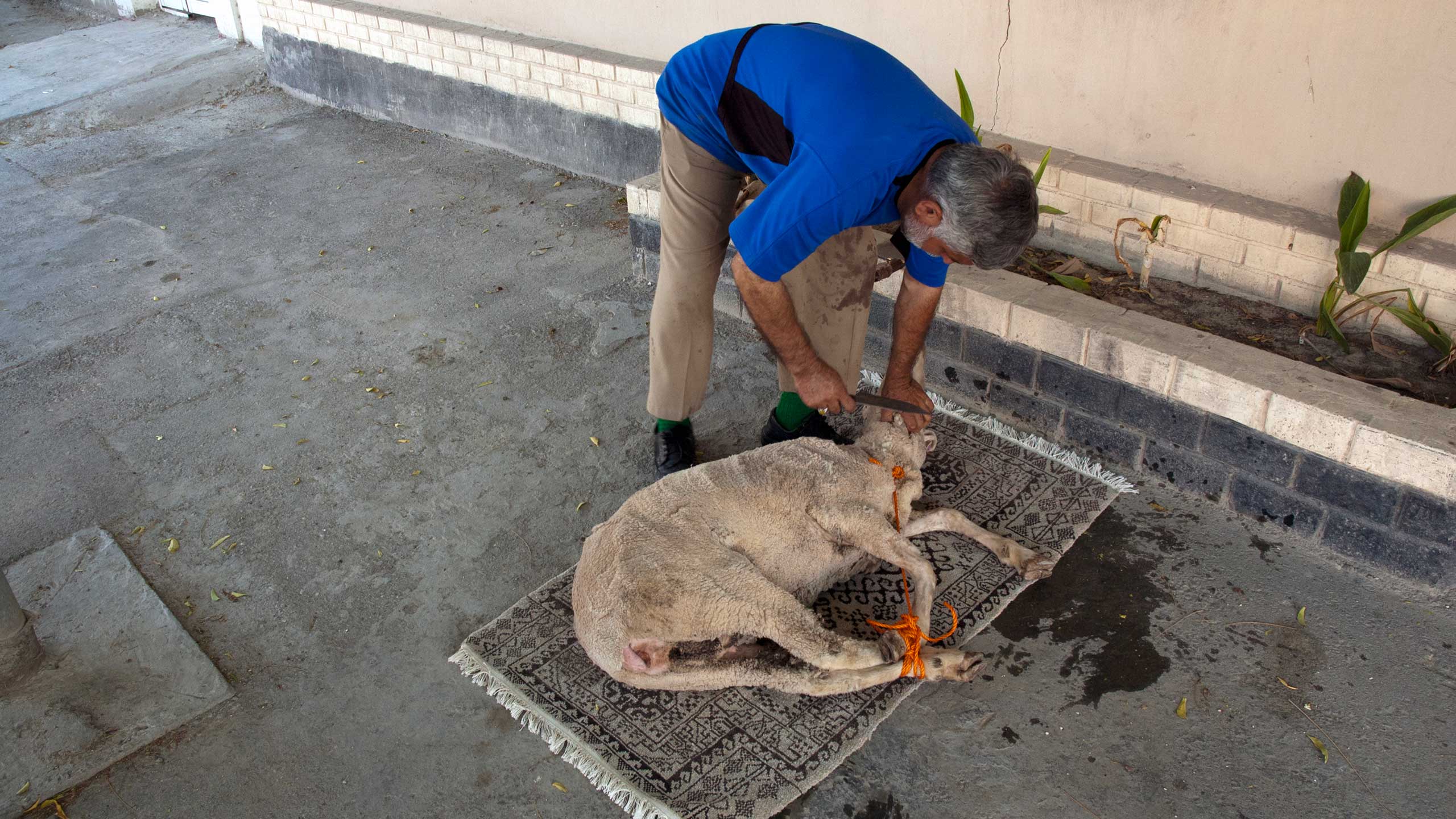 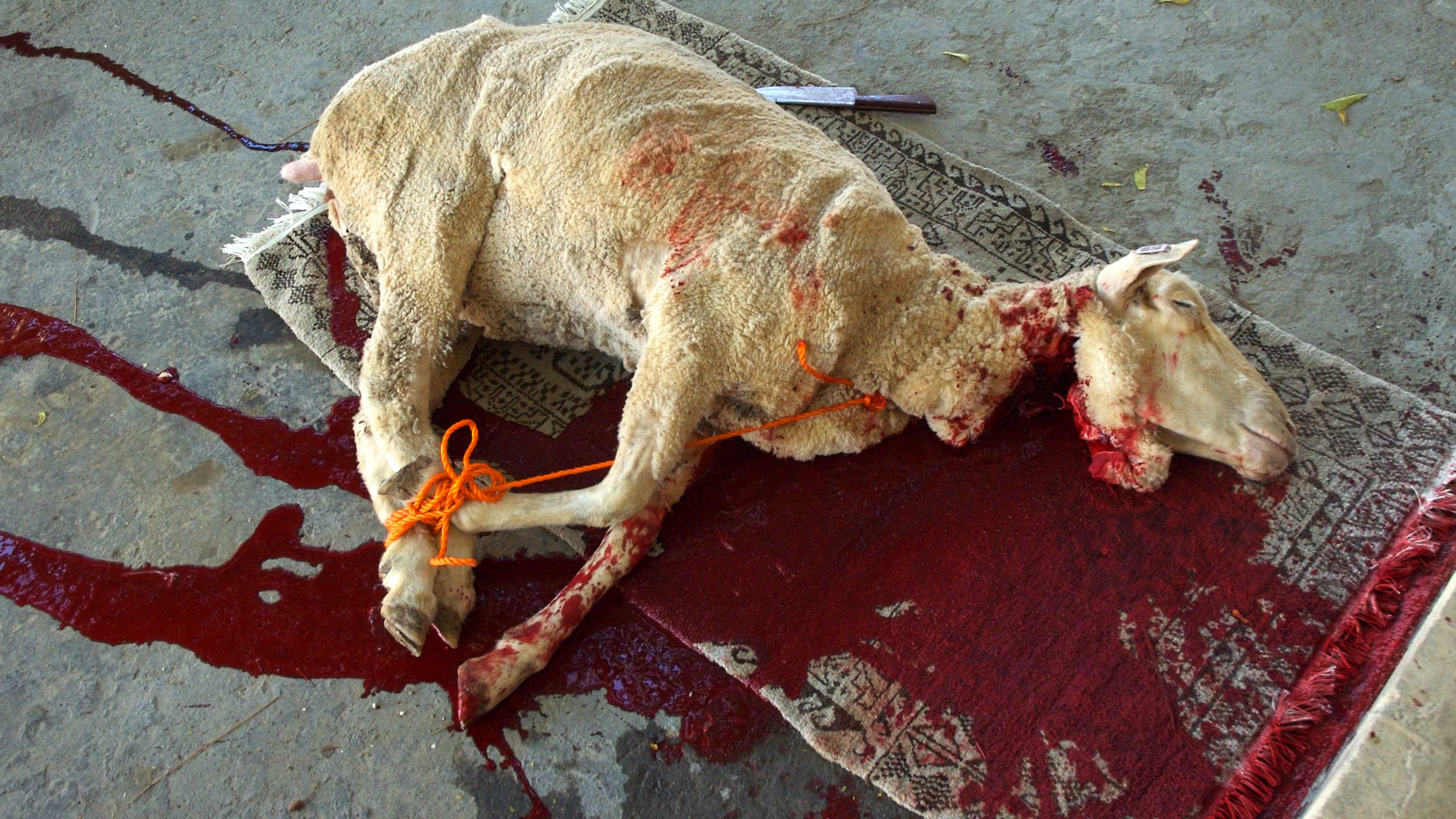 Project Stages: We have forgotten the sacrifice To the Other End Exhibition at Onomatopee 2011

The Baluchi funeral rug, painstakingly hand knotted by the artists with the wool of sheep that have been raised in Australia, and stained by the blood of similar Australian sheep slaughtered thousands of miles away in Bahrain during Eid al-Adha, points to the dimension of sacrifice that underlies every community.

The sheep that provided their blood and wool for this artwork were among the 3 million sheep annually shipped alive from Australia. 600.000 of them are exported to Bahrain where many are destined to be sacrificed during the Festival of Sacrifice, which is one of the major feasts of the Islam, a religion where sacrifice still plays an active and visceral role.

In the Quran, as well as in the Old Testament, (Sura 37:99 – 37:112 and Genesis 22, 1-13), Ibrahim (Abraham) receives the divine command to sacrifice his son, Ishmael (Isaac). Raising the knife in determination to fulfil the sacrifice demanded of him, he is stopped at the last moment, and Ibrahim is offered a sacrificial animal in replacement. The Eid al-Adha, commemorating the faith of Ibrahim and Ishmael, is thus a remembrance of obedience to God, and the willingness to sacrifice in the name of Allah. The Eid is furthermore an important reminder of the willingness to sacrifice that binds the Islamic community together.

According to mainstream narratives of secularization, there is an intimate link between Christianity and capitalism, precisely because it made such sacrifices obsolete: The animal replaced the son of Jacob, the animal in its turn was replaced with the Lamb of God, Christ, who once and for all sacrificed himself, so that we have to sacrifice…nothing. According to the narratives that link the rise of modern economy with the Christian heritage this allowed the West to progress to an effective worldly activity, unencumbered by the ritualistic spillage. Modern economy knows no sacrifice, just rationality.[i] Sacrifice is something backward cultures do.

Repeating this idea of superiority and affirming the end of sacrifice in modern secular countries, Meat and Livestock Australia, in reaction to increasing criticism from animal welfare organizations, defends the live export by describing it as humane and pedagogically responsible. [ii] The manager ensures us that the export of Australian sheep is an important cross-cultural exchange that allows the Bahrain population to progress towards more modern animal friendly practices: in a recent PR campaign they present themselves as educators of the ignorant but charmingly religious Bahrain population with regards to animal welfare. This culminated in the recent demand that ‘each supply chain [is] to ensure that Australian animals are processed in facilities that meet or exceed OIE standards’. [iii] This means that Australian sheep cannot be used for sacrifice at home, only in accredited abattoirs.

This charm offensive that borders on neo-colonialism covers up the fact that the sheep are transported alive out of purely economic reasons. First of all, the meat of the millions of sheep that are shipped across the ocean is not mainly used for sacrifice; it is mainly used as a way to prove the Bahrain population with affordable meat. The live export is kept economically competitive through a trade agreement that ensures that Australian meat costs about a quarter of the price of meat from local producers. The prices are kept artificially low through what is in effect a monopoly.[iv]

The sheep, unnecessarily transported alive on ships for three weeks only to be butchered right after arrival, provide the community of Australian farmers a means of living. But not without a sacrifice.

Part of the artistic project was the conduction of interviews with Australian sheepfarmers. Their reluctance to speak about the topic of live export testifies to the fact that economic practices can demand a sacrifice of their own, and that speaking of these sacrifices has become painful if not impossible. The suffering during transport, the monopoly that keeps local sheep farmers from competing with Australian farmers, the reasoning away of suffering, this is all part of the sacrifice that keeps the Australian community economically solvent.

All the narratives of barbarous Islam that are circulating nowadays notwithstanding, it would be a fallacy to think that we have done away with sacrifice. Rational economic functioning knows its own sacrifices.

Far from being something that we can do away with, sacrifice and violence might be a necessary and unavoidable element of culture and communities, secular ones included. The important thing is to remember and to take responsibility. Ibrahim was ready to make the sacrifice, the animal that replaced his son was not meant to alleviate his responsibility, it was to make him remember, and take responsibility for the sacrifice that was demanded of him.

The bloodstained cloth testifies not just of the sacrifice of the Muslim. The importance of to the Other End lies in remembering the sacrificial dimension in our own economic activity, and its rationalization stops us from taking full responsibility for the sacrifices demanded by our way of life.

We have forgotten the sacrifice.

[i] The most famous of these narratives is perhaps Max Weber’s The Protestant Ethic and the Spirit of Capitalism, in which Weber argues that capitalism arose conjointly with protestant Christianity and its ethic of wordly functioning. The ‘disenchantment’ of the world, in which religion is relegated to the private sphere, was an important element in the constitution of a rationalization of economic functioning, and thus, of capitalism.

[iii] See the website of Meat and Livestock Australia: http://www.mla.com.au/About-the-red-meat-industry/Livestock-exports/Animal-welfare-in-the-Middle-East, and: http://www.youtube.com/watch?v=5MTZ1guqAlE

To the Other End →