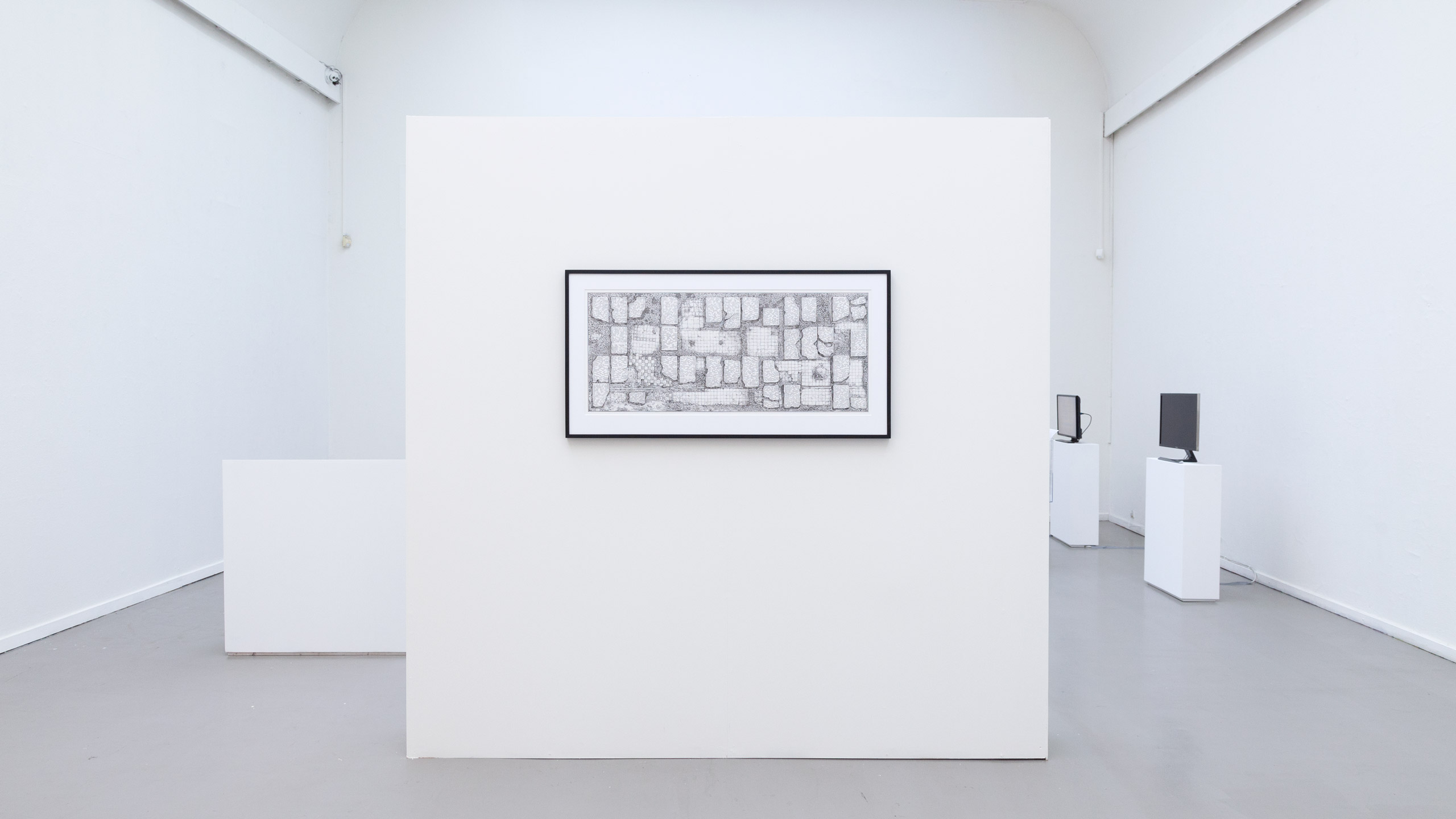 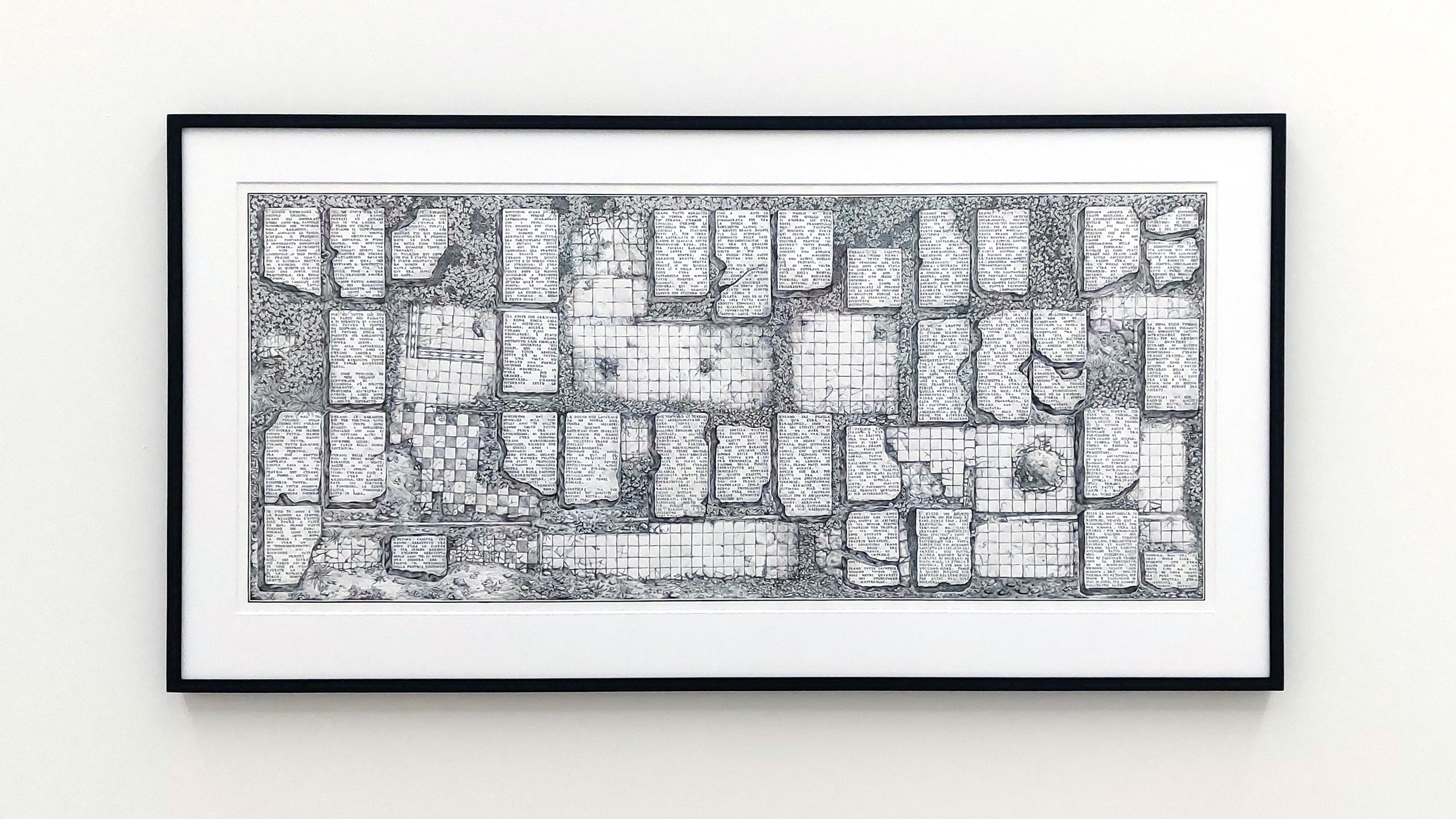 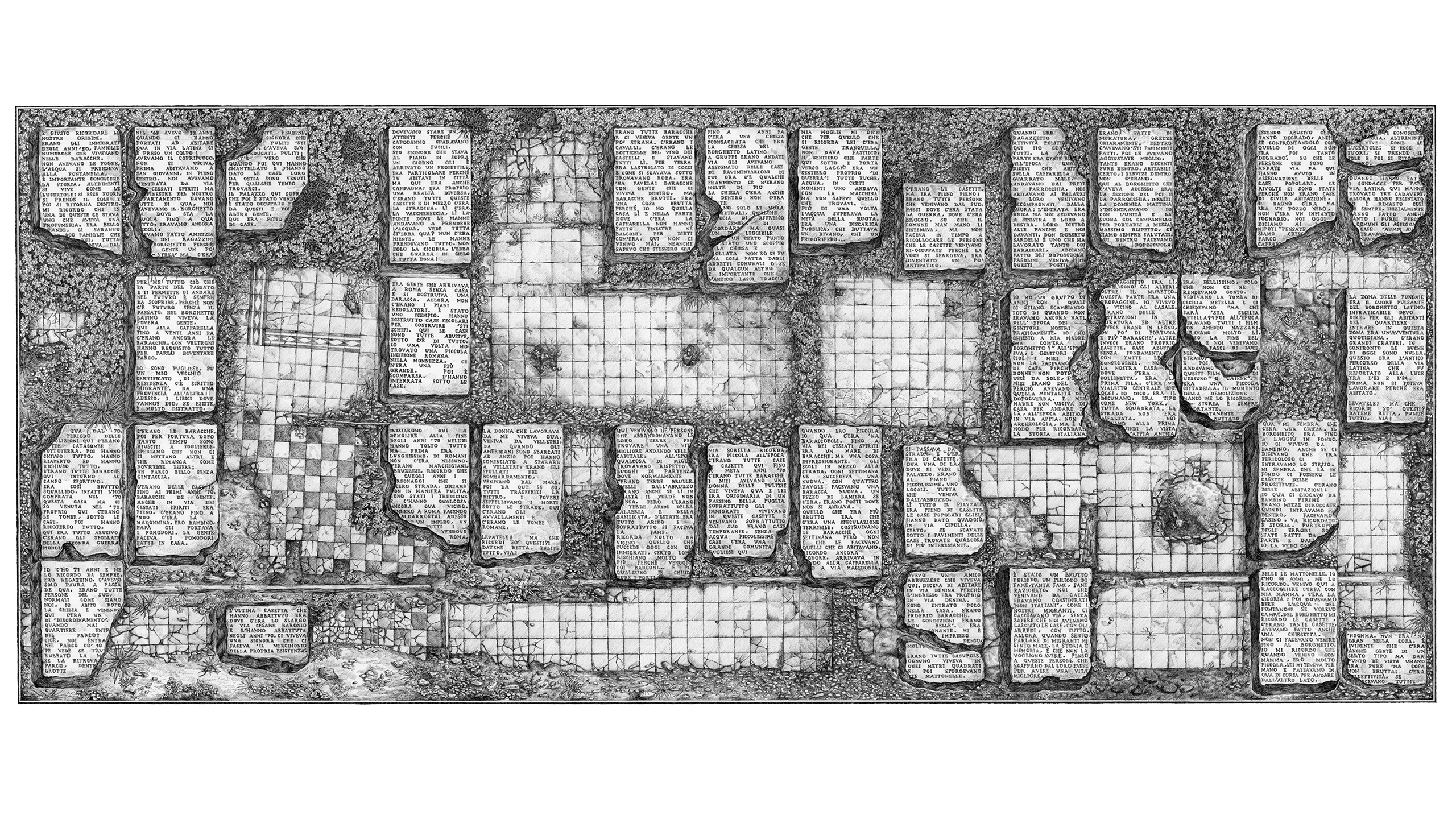 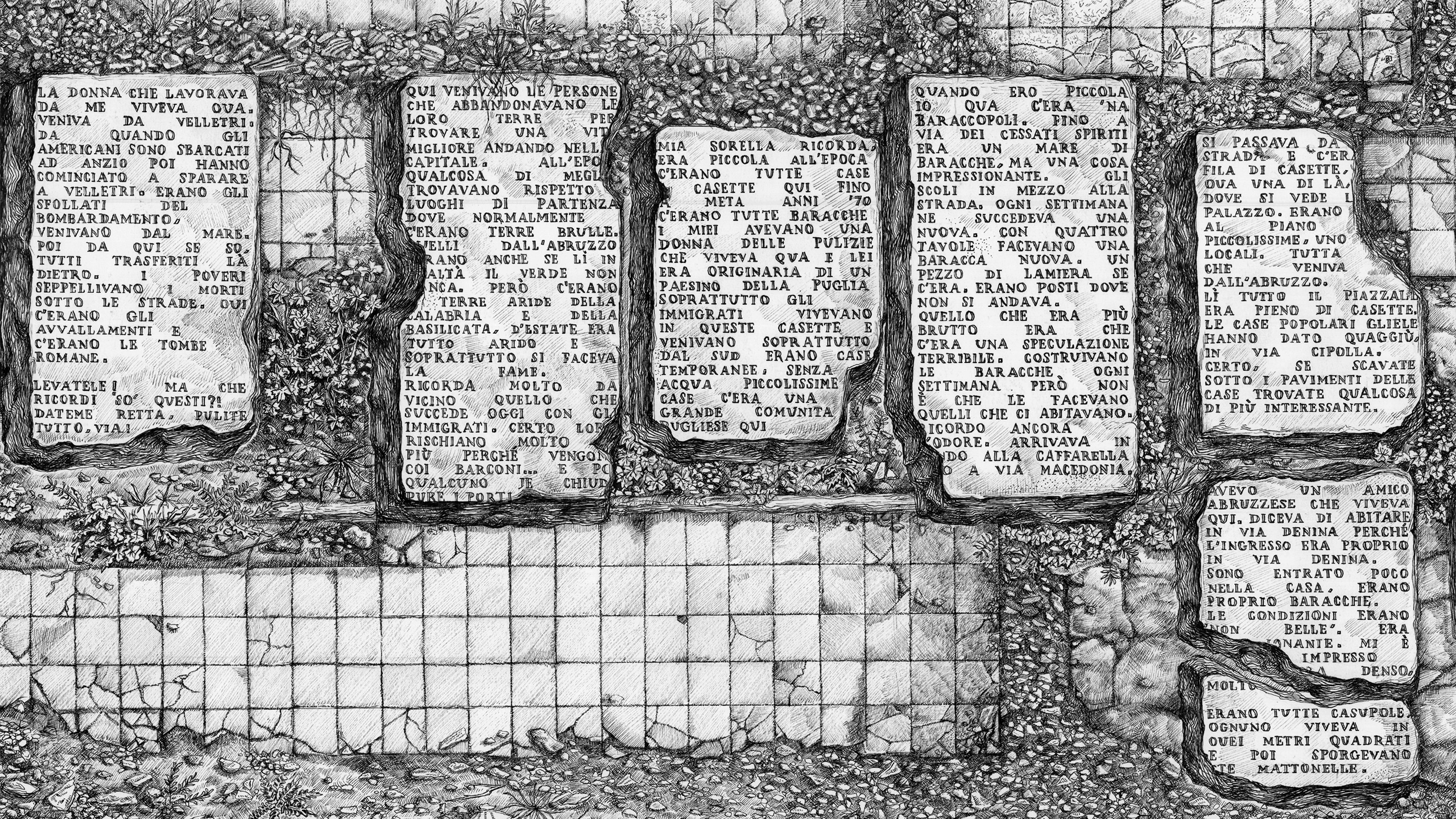 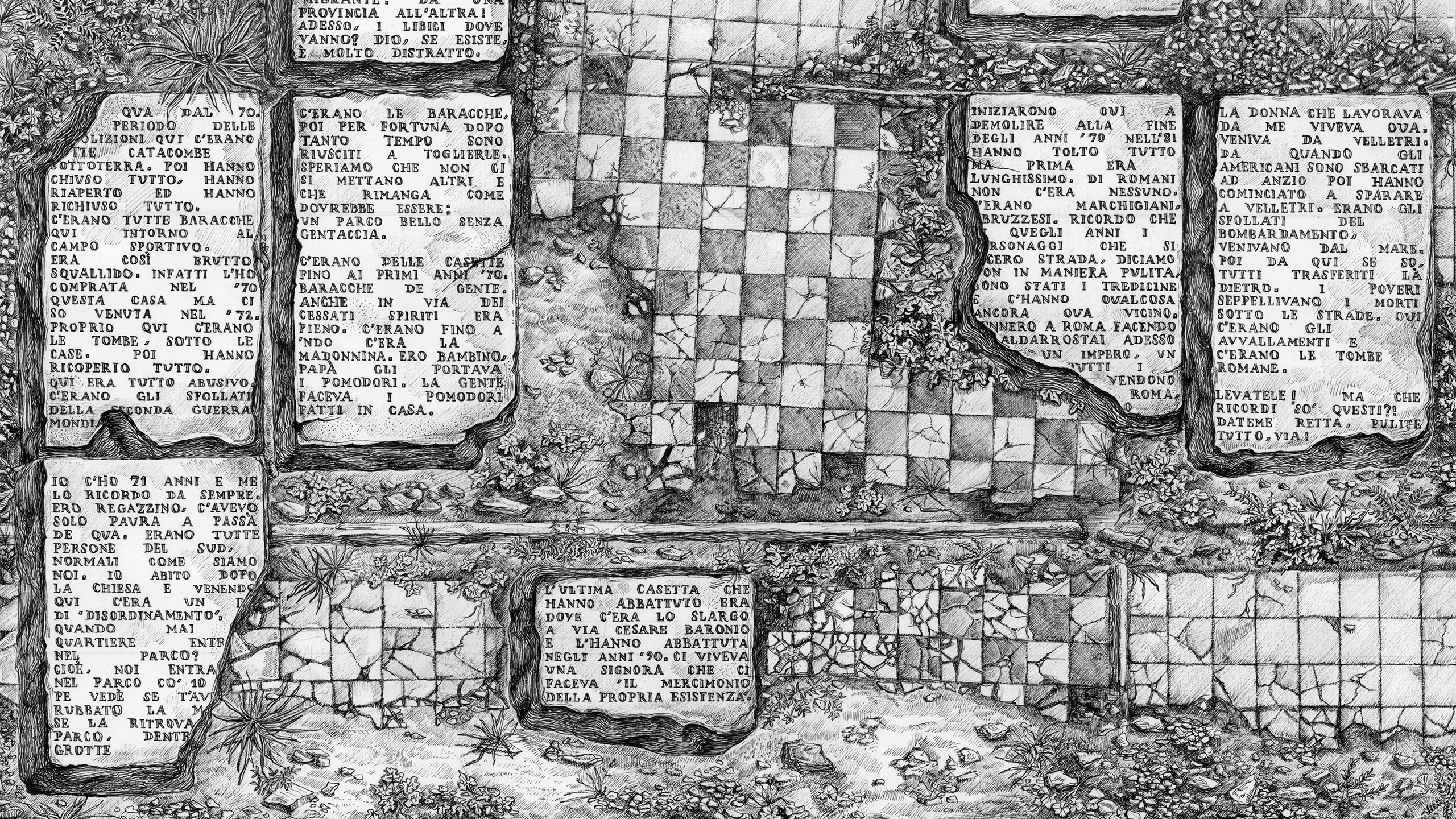 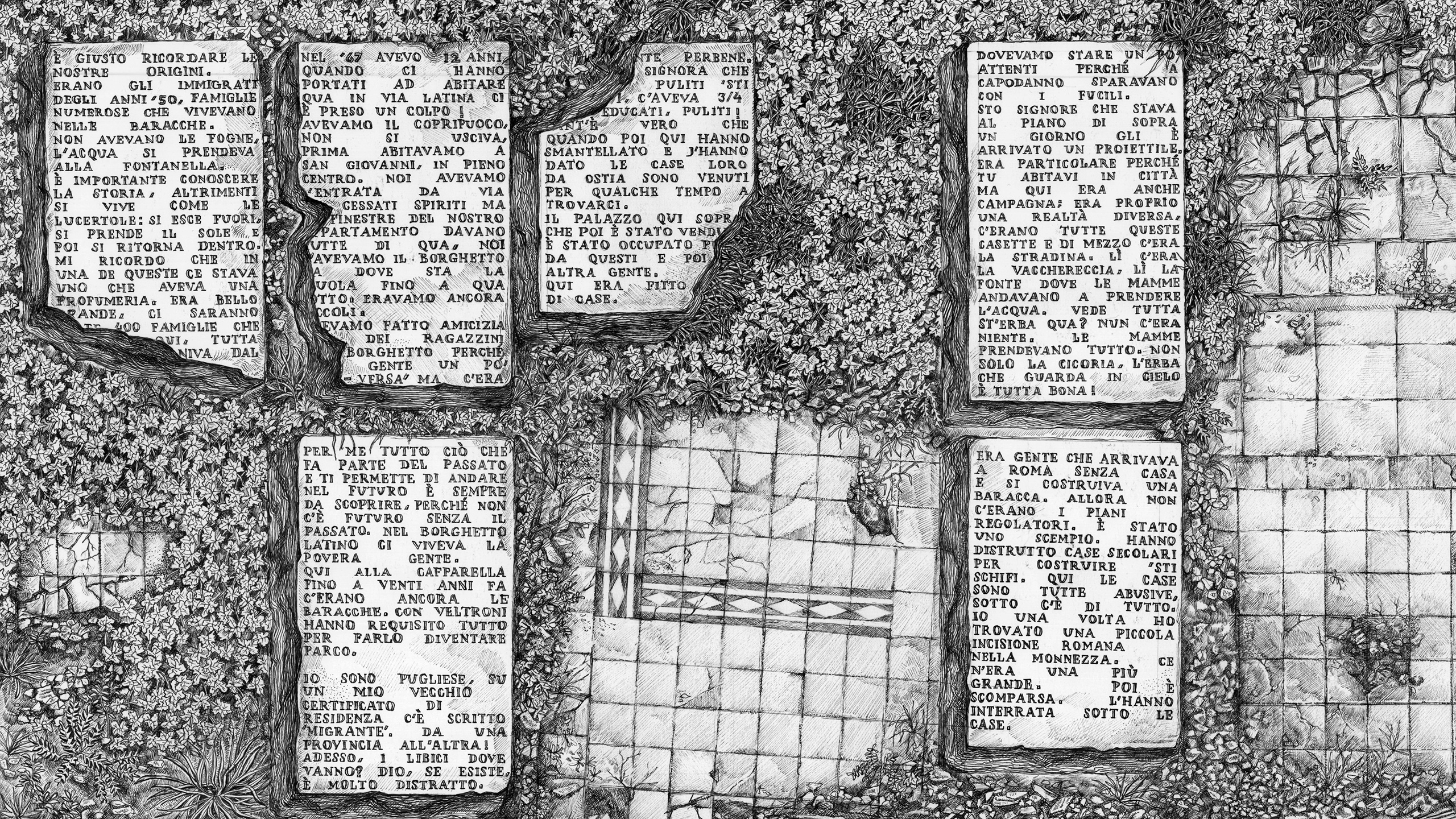 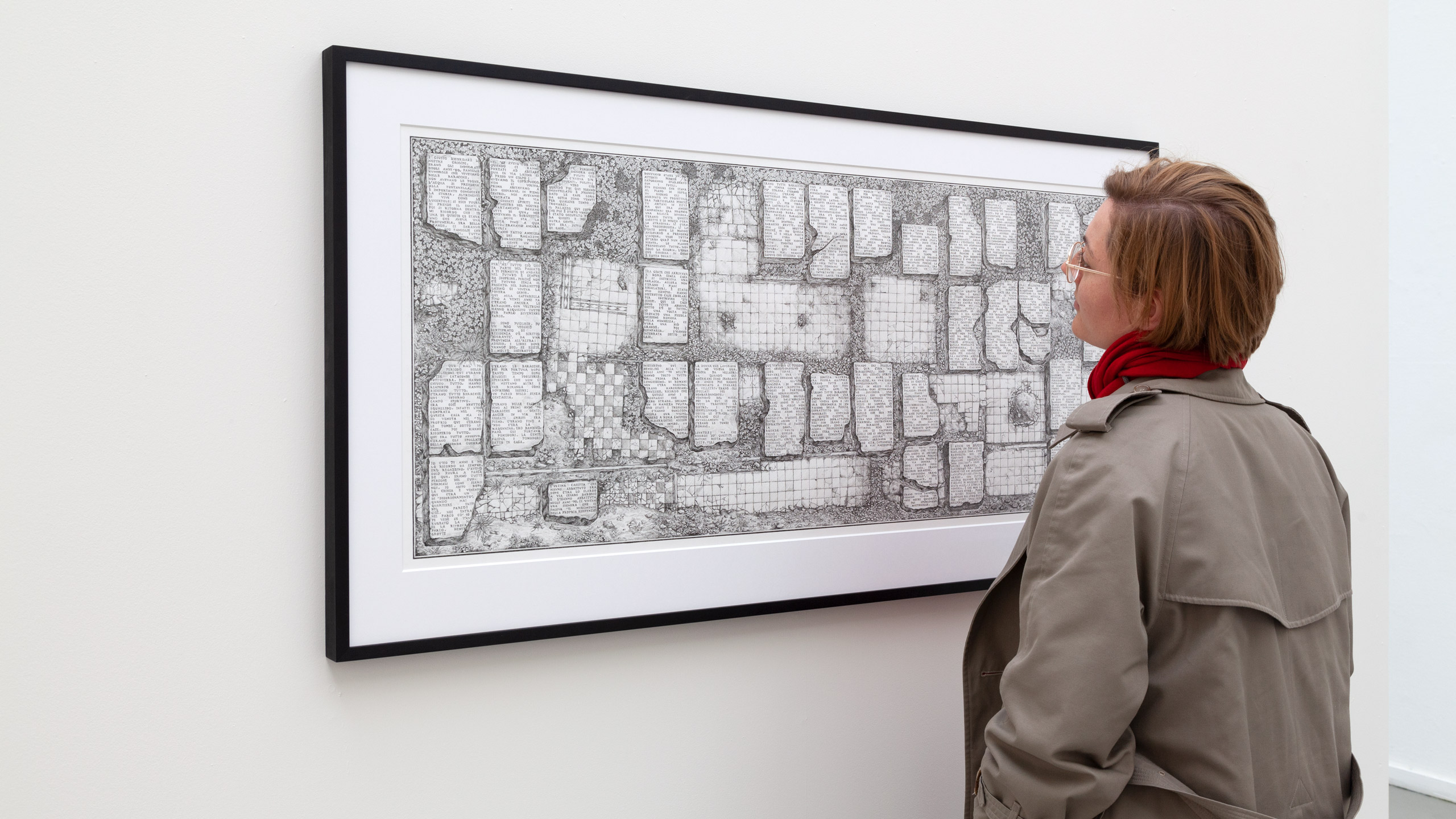 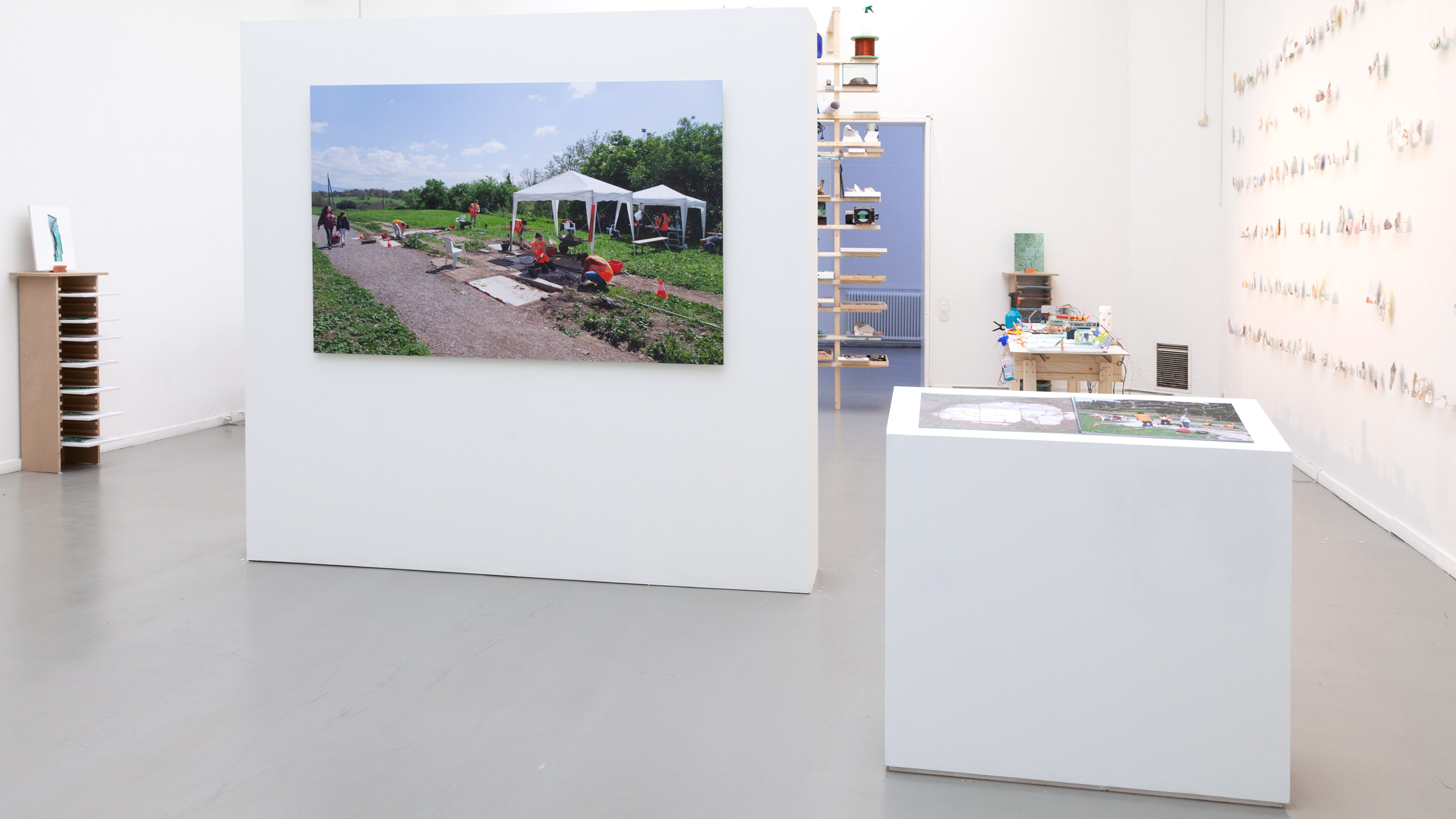 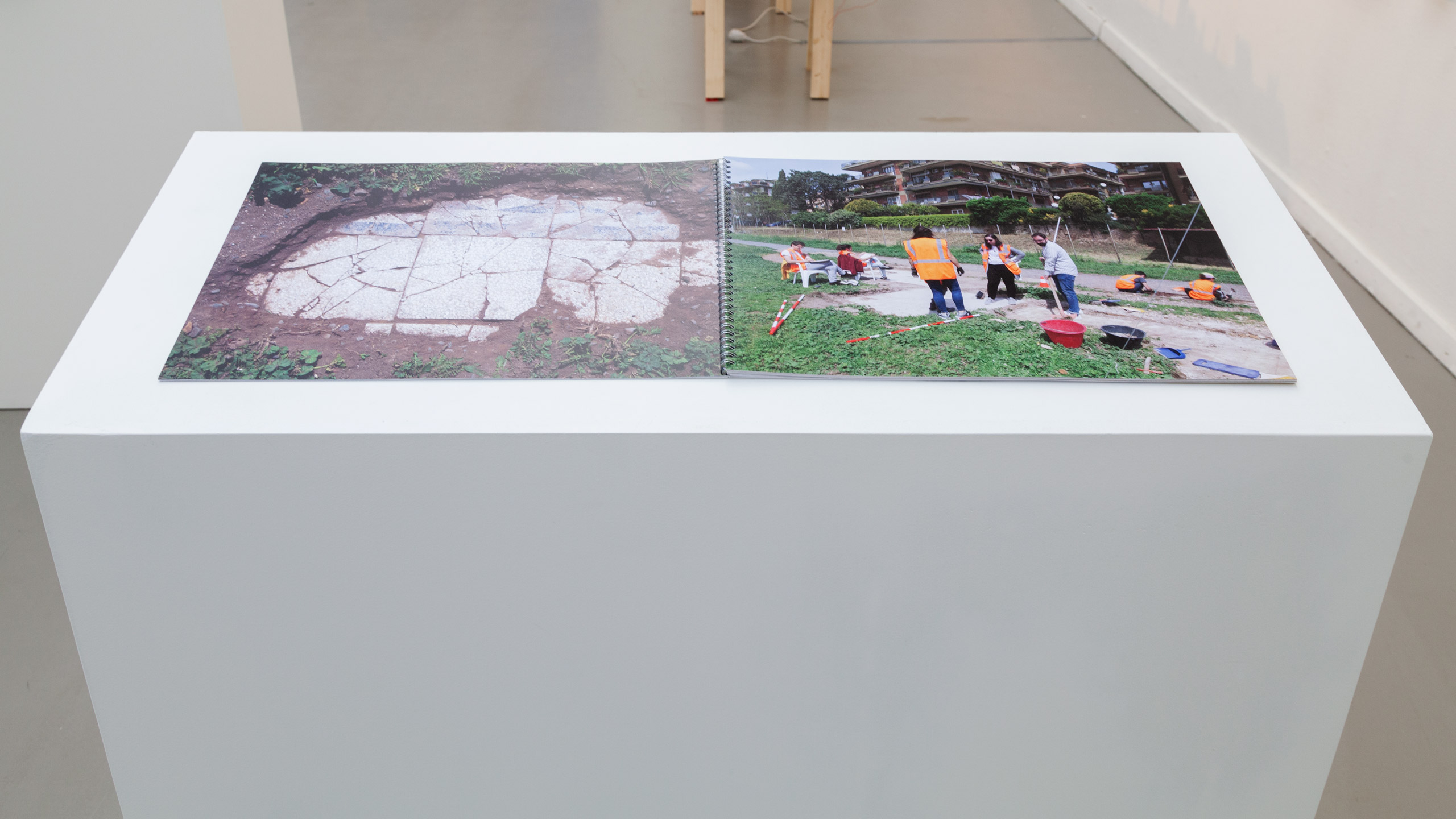 (Italian for ‘A Force from the Past’) is produced in the context of Exploded view, an interdisciplinary research project organised by CLUE+/VU and Zone2Source in Amsterdam. The aim was to investigate the changing claims and perspectives on the heritage of the Parco Regionale dell’Appia Antica in Rome. The work deals with the history of the former ‘Borghetto Latino’, an informal neighborhood in the park. The first phase of the project was an archaeological excavation on the site of the former neighborhood. The results of the project were used for a drawing that was exhibited at Arti et Amicitiae in Amsterdam (2022) and at Ex-Cartiera Latina in Rome (2019). A copy of the drawing will be used for the design of an information panel that will be installed on site in the near future.

After World War II, the city of Rome grew substantially, as one of the driving forces behind the “Italian economic miracle”, leading to an unregulated urban growth. In a relative short period, many informal neighborhoods emerged on the outskirts of the city, such as the Borghetto Latino in Parco Regionale dell’Appia Antica in a part know as the Caffarella Park. Life in the Borghetto was difficult, hundreds of families lived in miserable conditions amongst the many ancient ruins in the park. In 1969 the residents organised a protest, which formed the beginning of the official expropriation of the area in 1973. The Borghetto Latino was the first informal neighbourhood in Rome that got cleared, whereby its inhabitants were relocated to better housing facilities. In the 1970s, many more area’s followed and the living conditions of thousands of people improved significantly. The protest was a key moment in the history of the Italian housing movement and formed a crucial step in the formation of the larger Via Appia Antica park.

In contrast to the well-documented ancient history, there is very little that reminds people of the more recent past. There is not a single monument or sign that commemorates the story of the Borghetto or the revolutionary revolt that took place. Nowadays, the Caffarella park is an idyllic landscape with many ancient ruins, as if time stood still for centuries. Although it looks authentic, it’s in fact a carefully rendered landscape where inconveniences are erased or simply kept hidden. The aim of ‘Una Forza del Passato’ is to challenge the understanding of local heritage by focussing on the history of the Borghetto Latino and to highlight its importance in the context of the current debate around the informal settlements in the city, such as the Roma and migrant camps.

As 2019 marked the 50th anniversary of the political manifestation that led to the formation of the housing association it seemed appropriate to open a public discussion on how to incorporate the story of the Borghetto Latino as part of local cultural heritage. The public inquiry took shape in the form of an archeological survey. From the 15th until the 26th of April 2019 the excavation took place along the Via Latina, northeast of the Caffarella park in collaboration with architecture students from the Roma Tre University and with students of the Accademia di Belle Arti. By unearthing the remains, we were not only excavating stones, it was also a means to capture the fragmented collective memory.

All findings were carefully documented and simultaneously we recorded a multitude of different voices. The documentation of the project (drawings, maps and interviews) were used as the basis for a drawing, depicting an overview of the excavated area in combination with fragments from the interviews. The design is a reference to the so-called ‘fragment’ series of Piranesi, in which he systematically combined different archeological findings in speculative reconstructions and collages. With these prints, Piranesi tried to link individual elements in order to create a coherent narrative out of the chaotic and fragmented past. Piranesi played an important role in the documentation and preservation of the abandoned monuments from the antiquity, which were not considered meaningful in the 18th century. In a similar way the project ‘Una Forza del Passato’ tries to document the remains of the Borghetto Latino, not as a reconstruction of the eternal city, as was the case for Piranesi, but as a reminder of the opposite. In the final phase of the project, the drawing will be brought back to the Cafferella park in the form of an information panel, installed on the location where the excavation took place.